The Central Reserve Police Force (CRPF), which lost as many as 49 of its men in the worst ever terror attack, is trying to come to terms.

A scene of the spot after militants attacked a CRPF convoy in Goripora area of Awantipora town in Pulwama district of J&K on Thursday. At least 49 CRPF jawans were killed in the attack. (Photo: PTI)

Srinagar: The February 14 suicide attack in Pulwama has thrown up a tough challenge before the security forces containing a nearly three-decade-old insurgency in Jammu and Kashmir.

The Central Reserve Police Force (CRPF), which lost as many as 49 of its men in the worst ever terror attack, is trying to come to terms. Yet it, with other security forces and other official agencies, has begun to get their act together to face up to the new situation.

The suicide attack, something which had never been anticipated and never been planned for, is indicative of a new threat. Some defence analysts say that since the suicide attack was carried out by Jaish-e-Muhammad (JeM)’s local cadre, Adil Ahmed Dar, it could be the beginning of a new phase of militancy in the restive Himalayan state.

The hypothesis is supported by the threat issued by the Hizb-ul-Mujahideen that more Pulwama-like attacks against the security forces are in the offing. “We will keep on sacrificing our lives. We prefer to die than surrender. The day is not far when our 15-year-old children will strap explosives on their bodies and barge into your army vehicles,” said its “operational commander”, Reyaz A. Naikoo, in a 17-minute-long audio which went viral on social media earlier this week.

Following the February 14 attack, the CRPF has, apart from continuing to be part of these operations, taken a slew of measures to reinforce its individual presence on ground which include setting up dozens of new bunkers and pillboxes in cities and towns. Several other steps are under its consideration to ensure greater security. 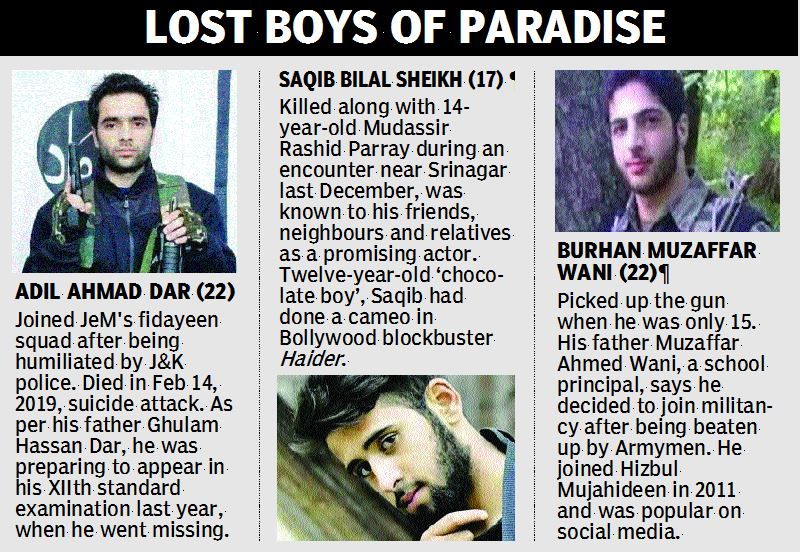 The police sources said that in order to prevent Pulwama-like attacks in the future, the CRPF as well as other security forces and the J&K police have restructured their deployment procedures, bolstered surveillance networks and are making an all out effort to improve their strategic intelligence gathering capabilities.

A day after the attack, home minister Rajnath Singh was in Srinagar to review the situation. After his meetings with top officials of various security forces, he announced changes to the convoy movement protocol. As per the new procedure, when a convoy is travelling on the Srinagar-Jammu highway, no civilian vehicles will be allowed on that stretch of the road. With it the restrictions enforced during the heyday of militancy in the 1990s are back and as was admitted to by Mr Singh, “it may cause inconvenience to the civilian but it is unavoidable.”

Since the restrictions have the potential of increasing public resentment against the security forces, the Home Ministry has in a significant move approved the entitlement of air travel on the Delhi-Srinagar, the Srinagar-Delhi, the Jammu-Srinagar and the Srinagar-Jammu sectors to all the personnel of the Central Armed Police Forces (CAPFs) including the CRPF. Their personnel can now take a commercial flight to join duty in the Kashmir Valley or while going on leave.

Earlier the suggestion that the train services between the Kashmir Valley and Banihal town of the state’s Jammu division could be used for ferrying the personnel of the CAPFs was termed as “impracticable” by the government as it would demand a more intricate security bandobast compared to that required for road convoys.

However, apart from ferrying the members of the CAPFs between the twin capitals of the state, the convoy movement takes place elsewhere in the Valley. Hence it has been decided that, when and where required, the CRPF, BSF and the Army convoys will move together in a common “window of time” during which civilian traffic will remain suspended. As far as the Srinagar-Jammu convoy movement is concerned, it will be spread over two days, with more stops in between, instead of the current one-day trip and the timing of it is also being changed.

The Army’s Srinagar-based Corps Commander Lt. Gen. Kanwal Jeet Singh Dhillon at a presser here asked “all the mothers of Kashmir to please request their sons who have joined terrorism to surrender and get back to the mainstream”. He, however, also warned that anyone who has picked up the gun in Kashmir will be eliminated, unless he surrenders.

However, many analysts and also some former officials of various security forces have publicly said that neither killing militants nor the measures that have been or are being initiated to ensure greater security alone may help in meeting the new challenge in Kashmir. “The government must dangle a carrot to win friends among the Kashmiri youth,” said Muhammad Amin, a former police officer.

Endorsing him, analyst professor Sheikh Showkat Hussain said that killing militants will give birth to new ones. “When a militant is killed, thousands of mourners turn up at his funeral. The very next day we learn that some of the youth among them have disappeared and a few days later, we are told they have joined the militants’ ranks,” he said, adding “you need to address the issue of Kashmir to keep its youth away from the gun or from becoming suicide bombers”. Some of the retired Army officers too have talked about the “urgency and inevitability” of finding a political resolution to the imbroglio. Among them is D.S. Hooda, former Northern Army commander and main architect of the 2016 “surgical strikes”. Lt. Gen. Hooda, who will now head a Congress task force on national security, said recently, “There’s radicalisation and there is anger and angst in Kashmir. Hence, there is need for engagement, particularly with the youth”.