As India evaluates its military and diplomatic options, it would do well to step up its intelligence and rely on Asymmetric warfare strategies. 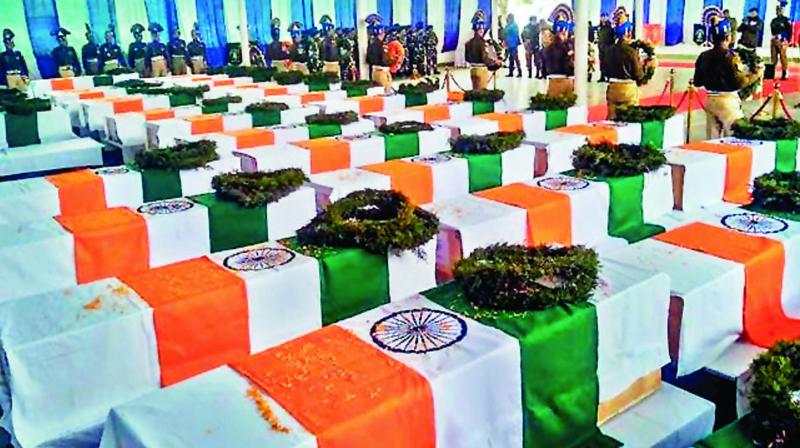 Coffins lie at the CRPF camp in Budgam on February 15 (Photo: PTI)

When terrorist Adil Ahmed Dar drove a vehicle crammed with explosives up to a CRPF convoy in a suicide attack and detonated it at Pulwama in the Kashmir Valley on February 14, killing several of the paramilitary force’s soldiers, something seemed to have snapped for a country that had so far become inured to being the target of high-profile terror attacks. As demands grew for some sort of military retaliation against Pakistan-based terrorists once again after the surgical strikes of 2016, the spotlight was on the range of diplomatic and military options that India had.

Talking tough, a furious Prime Minister Narendra Modi said Pakistan’s plans of destablising India would not materialise, adding that those who were behind the attack would have to pay a “very heavy price”. The PM acknowledged that “the blood of the people is boiling” and assured that “security forces have been given complete freedom” to take necessary action.

Speaking a few days later, PM Modi again said the Pulwama terror attack had shown that “the time for talks is over”. New Delhi also swiftly rejected Pakistan PM Imran Khan’s denial that his country had anything to do with the attack, pointing out that Pakistan-based terror outfit Jaish-e-Mohammed (JeM) had already accepted responsibility for the blast, and asking Islamabad to act. The Modi government also swiftly withdrew the “Most Favoured Nation” status to Pakistan and announced that the ministry of external affairs would initiate all steps to ensure complete “isolation of Pakistan” in the global community.

That precisely has become the crux of India’s diplomatic strategy. India tasted its first success within a week of the terror attack when the UN Security Council, including Islamabad’s all-weather friend China, late on the night of February 21 unanimously condemned “in the strongest terms” the “heinous and cowardly” Pulwama bombing. What came as a major boost to New Delhi is that China also eventually supported the resolution despite the fact that it had some initial reservations about its wording. But the adoption of the UN resolution has come as a blow to Pakistan. The next step is expected to be to once again move a resolution to get Pakistan-based JeM chief Masood Azhar banned by the UN, a move that China has been resisting for the past few years.

Soon after the attack, New Delhi had demanded that “all members of the international community support the proposal to list terrorists, including Azhar, as a designated terrorist under the 1267 Sanctions Committee of the UN Security Council”. Another part of the diplomatic strategy was to brief important nations including China and India’s strategic partners and friends about the attack and Pakistan-sponsored terrorism. India also conveyed Pakistani’s complicity in the attack to Saudi Arabia — another close friend of Pakistan — during the recent visit of the Saudi Crown Prince.

The sustained global diplomatic pressure being brought on Pakistan seemed to work from the fact that Islamabad on February 21 “decided to accelerate action against proscribed organisations” and “further decided that Jamat-ud-Dawa and Falah-e-Insaniat Foundation (FIF) be notified as proscribed organisations by the Ministry of Interior”. The JuD is led by 26/11 mastermind Hafiz Saeed, with the FIF being described as its so-called charity wing.

India sought to build even more pressure, with Union water resources minister Nitin Gadkari announcing that the government had decided to stop the flow of India’s share of water under the Indus Water Treaty of 1960 to Pakistan. But this is being seen as a more of a long-term plan. Former foreign secretary Kanwal Sibal points out, “If India’s measures are limited to diplomatic efforts, Pakistan will not be deterred by it”, adding that “naming and shaming” will not work for a country like Pakistan which has brazenly protected terrorists like Osama bin Laden in the past. “India should go ahead and suspend the Indus Water Treaty with Pakistan,” Mr Sibal says, adding that New Delhi should not give Islamabad the right to send its observers to inspect Indian projects. “Suspension of the Indus Treaty will allow us to build the dams we want to build,” he suggests.

Yet another reason cited by foreign policy watchers on why India cannot rely on diplomatic strategies alone, are Pakistan’s friends who will stand by it. China is seen as Islamabad’s most powerful benefactor and is pumping billions of dollars into the China-Pakistan Economic Corridor (CPEC). Besides, Saudi Arabia has also just announced billions of dollars worth of aid and investment to Pakistan. All this could ensure that Pakistan manages to continue sponsoring terrorism merrily despite severe global pressure. Hence the need for India to think about military strategies.

A proactive approach on this began to evolve soon after the Uri terror attack in 2016 when the Modi government authorised the Indian Army to carry out surgical strikes on terrorists who were located at launch pads near the LoC. Former Army deputy chief Lt. Gen. Raj Kadyan (retd) points out, “Only a military response now can make an impact. The country is losing soldiers by the day and its prestige is at stake. There can never be a perfect time but the situation is as favourable for us today as it can ever be.” He adds, “A second surgical strike or damage to a few Pakistani posts and bunkers will not be enough now. That time has gone. The military response has to be visible to the nation.”

But former commander of the Army’s Srinagar-based 15 Corps Lt. Gen. (retd.) Syed Ata Hasnain feels an “asymmetric” response would be much “smarter” compared to a conventional war or response. He says, “In principle, responding to an asymmetric operation by your adversary, through conventional war, may not be the smartest of responses. It would do well for us not to press the government to adopt the direct approach but rather the smarter one of countering hybrid with hybrid. Asymmetric strategy is best defeated by asymmetric acts in response.”

Several observers also point to the risks involved including that of a full-scale war. Another is that there is no surprise element any more unlike 2016, since the Pakistan Army is now ready and waiting across the LoC to thwart any Indian military covert strike. There have also been reports that Pakistan has been relocating terrorists from launch pads near the LoC to its military posts and bases. So any attempted surgical strike, too, by India runs the risk of heavy casualties, which will not achieve the objectives.

Other options include targeted artillery firing at Pakistani Army posts but this again will invite similar retaliatory firing from Pakistan. Yet another military option could be to use precision missile strikes on terror camps or other targets in PoK/Pakistan, or supersonic cruise missiles such as the BrahMos, or IAF fighter aircraft. But such a strategy will require hard intelligence, which will now be difficult due to Pakistan’s preparedness. It could also result in a dangerous escalation and an all-out war.