THE ASIAN AGE. | B S REIKWAR

Digging deeper, NIA found out that Hashim was in his early 40s, was a loner from a middle class family in Batticaloa in eastern Sri Lanka. 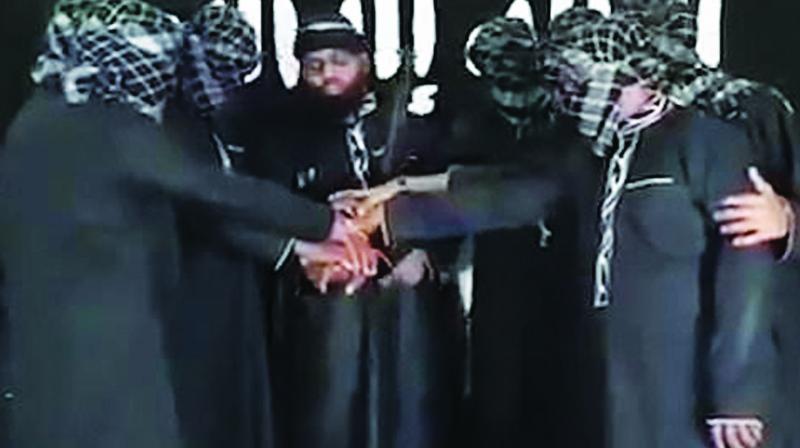 ISIS released this video of Zahran Hashim (face uncovered), the leader of the National Tawheed Jamath, leading the terrorists taking the oath of allegiance to Abu Bakr al Baghdadi, the Caliph of ISIS, before launching their Easter attacks in Sri Lanka.

The Easter massacre in the capital of Sri Lanka confirms the long-held fears among most researchers of Islamist terror that  death can knock on any door and at any time. True, some of the operatives would get killed, either of their own volition as suicide bombers or shot down by the state forces, and some could get arrested; but the truth remains that most of the free world is pretty much vulnerable and would remain so due to multiple reasons — inefficient and insensitive state agencies plus corruption in high places, to list just a sample.

How else could one able to explain the indifference of the security agencies in Sri Lanka to multiple alerts sent from India about terror attacks being planned in the island? The alerts had even mentioned churches as possible targets, apart from the Indian Mission in Colombo. And they did nothing about it at the intelligence headquarters, not even kept the political bosses informed, so much so, Prime Minister Ranil Wickremesinghe got furious at being kept in the dark and President Maithripala Sirisena sacked the defence secretary and the inspector general of police.

Strangely, the President declared he takes full responsibility for the intelligence failure that led to the bombings that killed over 250 people and injured about 500, but the stick stopped with the defence secretary and the IGP. "All they have done was to exchange letters among themselves", the President had said, while expressing angst at the poor response from his officials to the intelligence input from a "friendly nation".

"I asked both the police chief and defence secretary why the information was not shared with me, they remained silent", said the President, who is also the country's defence minister. He blamed the lapse on the government's weakening of intelligence operations and alleged his problem with Ranil happened because he had objected to the government's weakening of security forces - yet another punch aimed at arch-enemy Ranil Wickremesinghe in the never-ending feud between the two top heads in the country's administration, which actually is the ideal environment for the law-breakers to thrive.

And if the President carries out his 'promise' to ensure security to all his citizens, his police and military will soon be knocking on every door across the island to check out; that's his way of dealing with the terror threat through a Joint Operations Command he is setting up.

It's anybody's guess whether the President's JOC will live up to the task, because the challenge is 'tall and wide' - the radar must be in a position to scan right to the top in the ladder of authority at Colombo and its reach must stretch to every nook and corner of the island, and beyond too. He has said there are 130-140 ISIS suspects in the country. "Around 70 are arrested, we will arrest them all very soon ending this (terror threat)", the President has said.

Political analysts, as well as defence experts, strongly believe that the President and the Prime Minister must first shake hands and resolve to address jointly this huge challenge of terror. Their signing of a political peace treaty could be the first vitamin shot for the JOC, plus the understanding at the very top level in the Sri Lankan administration - both civil and military - that collaborating with the 'friendly nation' (read India) is absolutely necessary if the terror scourge must be tackled before it sinks deeper and wider in the community that is yet to heal its wounds from the Eelam war ended a decade ago.

Such strong international and intra-national collaborations are necessary to meet the deadly challenge posed by terror groups that are closely collaborating globally. It is important to note that while Colombo had blamed the National Tawheed Jamath (NTJ) for the Sunday blasts, the ISIS has claimed responsibility for the terror attacks. Both are correct, actually; the ISIS could have supplied training and hardware while the NTJ provided the manpower. The former has said the attacks were against the 'infidel holiday', meaning the Easter prayers in the three churches and the holiday-makers at the three hotels — triggering speculation the hit was in retaliation to the shootings at two mosques in Christchurch, New Zealand, in March that left 50 people dead.

Some experts have also pointed out that ISIS could be looking at new areas in easy terrain to spread tentacles since it has suffered setbacks in the Middle East. There have been reports of its rise in Philippines and with this attack in Sri Lanka, it is possible that it has now set its plans rolling for establishing units of terror in the region, including South India.

Deputy defence minister Ruwan Wijewardene told Parliament that initial probe pointed to the strong possibility that the terror strikes were in revenge for the attack on Muslim worshippers at Christchurch. He also said the NTJ, responsible for the Easter bombings, had links with Jamaat-ul-Mujahideen India, which was formed only in February 2019.

There were reports that the NTJ was also connected to Tamil Nadu Thowheed  Jamath. However, this was strongly refuted by the TNTJ functionaries, who claimed that their outfit had nothing to do with the NTJ and all the confusion arose because of the similarity in the names. However, those in the know of things insist that TNTJ has been "quite vocal" when it came to public show of anger on issues and is now on the intelligence scanner after the Colombo blasts.

The ISIS released a video of Zahran Hashim, the NTJ chief, leading the terrorists in the oath of allegiance to Abu Bakr al Baghdadi, the Caliph of ISIS, before launching their Easter attacks in Sri Lanka. The National Intelligence Agency (NIA), while recently probing an ISIS-inspired module planning assassination of prominent Hindu leaders in South India, stumbled upon Hashim's videos. One of them talked about hitting the Indian Mission in Colombo and another exhorted the Muslim youth in Sri Lanka, Tamil Nadu and Kerala to combine energies towards creating an Islamic rule in the region. The Indian intelligence agency, RAW, had shared this information and cautioned counterparts in Colombo there could be attacks on churches in the island during large congregations.

Digging deeper, NIA found out that Hashim was in his early 40s, was a loner from a middle class family in Batticaloa in eastern Sri Lanka. Their suspicion that he had ISIS links proved correct when the terror outfit released the video showing him leading the nine-member killer squad on Easter Sunday.

While President Sirisena confirmed that Hashim had died in the blast at the Shangri-La hotel, the identity of a young man who went with him on that suicide attack is what scares and worries the State and its future managers of the terror challenge.

That second bomber has been identified as Ilham Ahmed Ibrahim, the 31-year-old son of 'spice-tycoon' Mohammed Yusuf Ibrahim, one of the most influential and richest men in Sri Lanka. The father is said to be highly connected politically, an award-winning exporter/entrepreneur and was a regular at the parties and receptions hosted by Mahinda Rajapaksa when he was the President. Another son, Imsath Ahmed Ibrahim, 33, was the suicide bomber at Cinnamon Grand hotel. Both the brothers had strapped the explosives on them and detonated amid the customers in the two hotels.

When the police went to investigate at their palatial house at Dematagoda near Colombo - because one of the brothers had checked in at the hotel the previous night giving his original name and address - a young woman, said to be the wife of one of the brothers, blew herself up. Her two children were also killed in the blast, along with some police officers. It was found that the entire place was booby-trapped.

The involvement of tycoon Yusuf shocked many in Sri Lanka. He was too important a man in the upper crest of society to be involved with a terror outfit, people thought. But then, this episode clearly showed how the deadly ISIS could infiltrate into a cosy family and turn the entire urban household into messengers of death. It is not difficult for them to spot such families that wield influence and work on their vulnerabilities.

"If vulnerable individuals and families could deliver such devastating terror strikes, just imagine what the larger entities such as the vulnerable socio-political environments could offer for the hungry terror outfit", said a Tamil Nadu  intelligence officer requesting anonymity. "We have such an environment prevailing here post-Jayalalithaa. We need to be extra vigilant, both as a government and as people".

Pausing for a while, the officer added, "Unfortunately, our bosses are all engaged in defending their own interests in these elections. Defending the country is not an issue on their radar now". The man looked and sounded really sad, worried.

(The author is a research scholar)