India paid price for Indira’s folly, should we pay for grandson’s too?

A separate PIL seeking linking of Aadhaar with Election Identity Card and documents of movable and immovable property is also pending before the CJI. 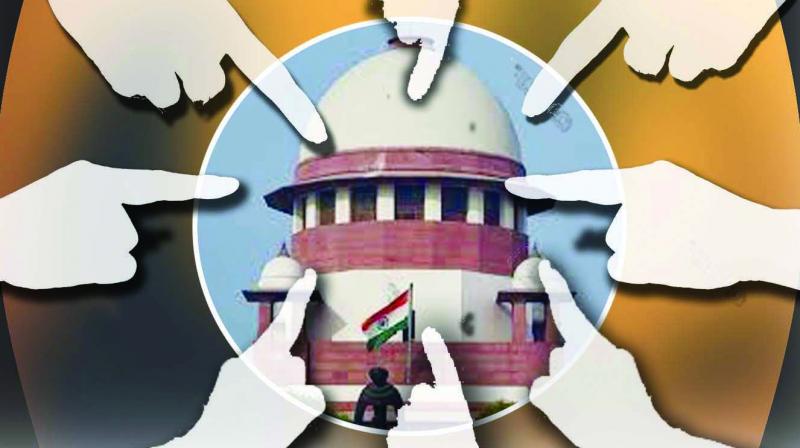 Two senior legal eagles, holding opposite views caution against diminishing the primacy of the judiciary, the last recourse of the common man.

The controversy over the move to impeach the Chief Justice of India by opposition parties has only deepened the judicial divide. Senior judges of the Supreme Court  are calling for a meeting to discuss the court’s future, while others are asking for action to protect the judiciary from undue interference from the government. A crisis is at hand, triggered by an opposition outcry over a perceived cover-up of the Loya case, worsened by the government sending back a recommendation that Justice Joseph be elevated to the SC. Two senior legal eagles, holding opposite views caution against diminishing the primacy of the judiciary, the last recourse of the common man.

It doesn't require foresight to understand the motivations behind impeachment motion. The Congress was well aware that it will suffer a sorry defeat. There are three reasons behind the ill-conceived step: First reason is pressure tactics. The motion, whether it is thrown out or not, will serve as a rhetorical and political pressure on the office of the CJI ahead of verdicts in politically sensitive cases such as the Ayodhya, Rohingya and PILs on Electoral Reform

The second reason is Intimidation tactics.  The Congress is sending a subliminal message to the judiciary that if verdicts are not to its liking, it knows ways in which judiciary can be arm-twisted to fall in line.

The third reason is the Media debate. The motion's fate notwithstanding, the move is sure to generate heat and noise in media. It also hands Congress the chance to cast aspersions on verdicts and undermining the moral authority of the judiciary. In both cases, it hopes to gain a political fillip from the controversy.

At present, many important and politically sensitive matters are pending in the Supreme Court, which may change the entire political scenario. The five Judges Bench headed by the Chief Justice of India is hearing the Aadhaar case and Congress leaders are opposing it on the ground of right to privacy.

A separate PIL seeking linking of Aadhaar with Election Identity Card and documents of movable and immovable property is also pending before the CJI.

The Chief Justice of India is hearing the Ayodhya Case and declined Congress leader's request of adjournment. A PIL seeking ban against the person from contesting elections, if charges have been framed against him in serious cases, is also pending before the five Judges bench headed by the Chief Justice itself.  PIL to setup one Special Court in each district to decide the cases of Legislators within one year is also pending in the Supreme Court. Two Special Courts have been established in Delhi and matters related to the Legislators including the National Herald case have been transferred for early disposal. Defamation cases against Mr. Kejriwal were also transferred in Special Courts to decide within year but he publicly apologized and mutually settled his matters.

PIL to debar convicted person from forming political party and becoming a political office bearer is pending before the Chief Justice of India and is listed for final hearing on May 3. Presently, there is no restriction on becoming a political office bearer. If the Supreme Court will allow this petition,   convicted politicians like Lalu, Chautala and others will be barred from politics. It is pertinent to mention that Rahul Gandhi and Sonia Gandhi are on bail in National Herald Case and the matter has been transferred in Special Court for speedy disposal.

PIL seeking ban on higher denomination currency above Rs 100/- and restriction on cash transaction above Rs 10,000 rupees is also pending before the Chief Justice of India. We know very well how Congress party and particularly Rahul Gandhi had opposed the demonetization.

PIL to detect, detain and deport all illegal immigrants including Rohingyas and Bangladeshis, is pending before the Chief Justice of India and is listed for final hearing on May 9.  Senior Congress leaders are arguing in support of illegal Rohingya immigrants on the human rights grounds.

Undoubtly, it is also a very sensitive matter and will affect political scenario.

PIL seeking ban on Legislators from practicing other professions particularly practicing as an Advocate is pending before the Chief Justice of India and is likely to be listed on May 4. It will be an irreparable loss to the Congress party and particularly to Mrs. Sonia Gandhi and Mr Rahul Gandhi if Kapil Sibal, Abhisekh Manu Singhvi, P. Chidambaram, KTS Tulsi and Tankha etc would be restricted from practicing the Law. Who will defend their National Herald Case?

Sharia Courts have been accepted by the Supreme Court and the three-judge bench headed by the Chief Justice of India has referred it to the Constitution Bench. Like the Triple Talaq, it is also a politically sensitive case.

Congress' misguided and audacious attempt to impeach the Chief Justice of India the very next day after the Supreme Court delivered a decisive verdict on the Judge Loya case shows that Indira Gandhi's spirit still resides safe and strong in her grandson. The unprecedented impeachment notice against the CJI initiated by the Congress is similarly a sad attempt by a cornered leader is systematically undermining every democratic institution to compensate for his inadequacy. Just as India paid the price for Indira's folly, so are we to experience another dark chapter in democracy authored by her grandson.

This attempt to browbeat the Chief Justice of India and undermine the judiciary has little chance of succeeding not merely because Congress, its political cohorts, and fellow travellers lack the numbers, but also because the fabric of democracy is strong enough to withstand these assaults, especially when such moves underlie a diabolical motive.

"Fair is foul, and foul is fair", uttered the three witches in William Shakespeare's Macbeth. When the rules of the game are inverted then the ones who are undermining democracy pose as its saviors. Congress' claim that it is motivated by a higher ideal in bringing the impeachment motion is spurious. Impeachment of the CJI is tortuous process made expressly so by the Indian Constitution to protect the CJI's office from exactly these kind of machinations that are now unfolding.

According to Article 124(4) of the Constitution of India: "A Judge of the Supreme Court shall not be removed from his office except by an order of the President passed after an address by each House of Parliament supported by a majority of the total membership of that House and by a majority of not less than two-thirds of the members of that House present and voting has been presented to the President in the same session for such removal on the ground of proved misbehavior or incapacity."

Moreover, there has to be iron-clad ground of misbehavior on the part of the CJI for such a move to be initiated. Have these conditions been met? A CJI is not above the law, he can be impeached, but only on grounds of serious misbehavior.

Serious misbehavior cannot be concluded from the fact that certain orders of his were wrong, that is not correct. If you try to impeach the CJI on grounds like this, then, the very independence of the judiciary will be at stake. Senior jurist Fali Nariman said Government of India Act in 1935 gave CJI the authority for being Master of the Roster and he certainly could not be impeached for invoking the authority the position gave to him.

We therefore have a situation where legal eagles believe the act of setting the motion for CJI's impeachment has no moral, legal or ethical standing. It will harm the independence of the judiciary and will be detrimental for Indian democracy. And yet, Congress cites impeachment as the "only remedy" to save India's democracy. I have no hesitation to say that Congress is not only trying to pressurize the Chief Justice of India but also the Judiciary.