Despite diminishing returns, large number of drivers join, while many leave the service. 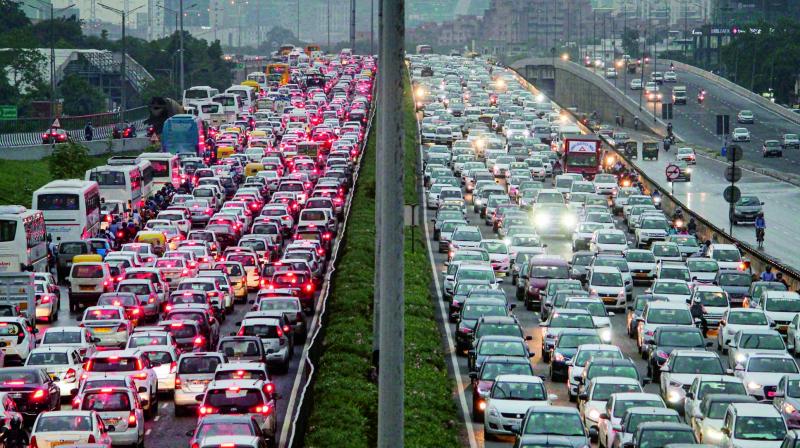 Absence of public toilets is one of the biggest issues facing cab drivers, besides pathetic quality of road infrastructure.

The life of a cab driver — Uber, Ola and others — in the twin cities, or any other Indian metro, is not easy. Technically, they are ‘self-employed’ but no one considers them entrepreneurs. Their lives are at the mercy of cab aggregators, the government and middle-class consumers, who are wont to considering them slaves.

Demonised by a generally hypocritical public opinion over fee surges and ‘crime’ of cancelling or refusing rides, they find no voice in the system. Yet, thousands of them everyday ply citizens in a million or more trips to their destination — a quasi public service funded by their own investment — with reduced returns, and no thanks. And the drivers themselves believe they aren’t doing anything wrong.

Over the past few years, cab drivers have been subjected to many new rules. The most shocking recent one was from the Cyberabad police, which announced that people could complain to them in case a driver cancels their ride. The driver could be slapped with a fine of `500 — a big portion of a day’s income. The general public rejoiced this move.

The drivers have been left with a feeling of frustration and puzzlement. They wonder where their right to conduct business on their own terms vaporised. They want to retain a moral right to cancel rides of ‘rude’ passengers and refuse rides that are logistically and financially non-viable.

There is, however, a lot of confusion about this rule within the driver community. A few days ago, Balaswamy, a driver with one of the two main taxi aggregators, was told to pick up a woman passenger from Somajiguda. “I called her for directions. She was very rude to me. She kept calling me ‘ra’ and ‘bey’ (in Telugu). She was talking to me as if I was a beggar. I wanted to cancel the ride, but since I heard I could be penalised for it, I didn’t,” he confesses.

Had Balaswamy known better, he would have known that he could be penalised for cancelling rides only in Cyberabad jurisdiction, not Hyderabad. Most drivers are unaware of this new diktat’s locational limitations, while most don’t even know of this rule.

Balaswamy and other drivers said rude drivers were very common in their line of work and wish to be able to cancel rides from such people. After all, they argue, they are offering a service and must hold the right to withhold or refuse.

Interestingly, this democratisation of driver and passenger power and bringing both on an even keel is one of the big reasons for Uber’s worldwide appeal. Both drivers and riders can rate each other on a five-point scale system, thereby, incentivising good behaviour on both sides.

However, according to Cyberabad police’s new rule, the rider’s rating is meaningless now. It reverses the gains of democracy against feudalistic social tendencies. Bizarrely, customers allege that drivers refuse rides that are “not lucrative” as if it was a crime. Drivers wonder why they should take a loss or subsidise the lacunae in public transport.

Murali, a cab driver, said, “What should we do if your locality is on the city’s outskirts? To drop you, we will have to drive for several kilometres without a customer. If you have problems getting somewhere, ask the government to improve public transport. We are not paid by taxpayer’s monies?”

Over regulation
There are other examples of government regulation that are borderline to outright ridiculous and unjust, and have not gone down well with the driver community. A few months ago, the Telangana state government made it mandatory for all transport vehicles to install speed governors. The community does not trust these devices, claiming, the devices have ruined many a car. Their main grouse, however, is that “selective enforcement.”

Balaswamy said, “We have been forced to spend thousands of rupees out of our pockets to install speed governors. Though my car seems to be working fine currently, my friends have reported a drop in performance. Also, why are not the general public being made to install these devices in their cars? Don’t they over-speed?”

He also argued that Uber and Ola apps have been measuring car speeds for years and they already have a system to penalise drivers for over-speeding. “For the same offence, why should there be two separate enforcement mechanisms for yellow and white number plates?” he asked.

Public infrastructure
Several problems stem from a general lack or pathetic quality of road infrastructure in Hyderabad, thanks to the GHMC. The two biggest issues facing these self-employed cab drivers are lack of parking spaces on the road and absence of public toilets. Combined with an entitled customer base, these two problems are giving drivers nightmares.

Ugraramulu, who left the driving profession a month ago after he got tired of the working conditions, tells his horror story. “A few months ago, on a particularly busy day, I was assigned to a woman at Jubilee Hills. I had to use a urinal urgently but I couldn’t find one anywhere. After a long time, almost an hour of looking, I found one and told the woman I had to stop I would be back in a second. She demanded to know why. I kept telling her it was a personal matter, but she demanded I not stop and threatened to file a complaint against me.”

Drivers reveal that in order to have a productive day and not make losses, they would have to be on the road constantly, often at the expense of toilet and food breaks. As for parking, drivers said either them or someone they knew had been handed a parking challan while waiting for customers on the road.

Ugraramulu said, “I was waiting for a customer. A traffic policeman came from behind and hit my car hard with his lathi to get my attention, ordering me to move. My car suffered a large dent. My car owner made me pay for damage as well as the parking challan.”

No longer so lucrative
In 2016, Uber and Ola drivers were having the best time of their lives. Enticed by amazing incentives announced by the two companies focussed on building a driver base, many people left full time jobs and became drivers. In those days, on a decent day, each cab driver could earn more than `4,000 in a single day.

The payments made to these drivers by aggregators also include tax deductions.

But, most drivers rarely know how to file for tax returns. The aggregators offer little assistance in this regard.

For instance, Balaswamy said he hadn’t filed a single return since 2016, when he started working as a driver. In short, because of his ignorance, the government has his money.

For most of these drivers, this is their first tryst with a multinational company. They said they had expected transparency from companies but they turned out to “just another employer.”

“When I joined in 2016, the company’s officials were very enthusiastic about sending me on to the road. They didn’t explain me payment terms, contract details or anything. Even I was in a hurry and didn’t bother. Today, I have no idea how much commission I get for each ride. If I ask the management, they simply dodge the question,” said one driver.

However, the sheen hasn’t faded entirely. Many drivers said though the number of people leaving the field is a high right now, large number number of people are entering it too. The old guard, however, enjoyed a brief period of high income.

The rookies won’t have this luxury. It remains to be seen how they will handle the rough ride that is surviving as a cabbie.