Surging prices and effect on the economy 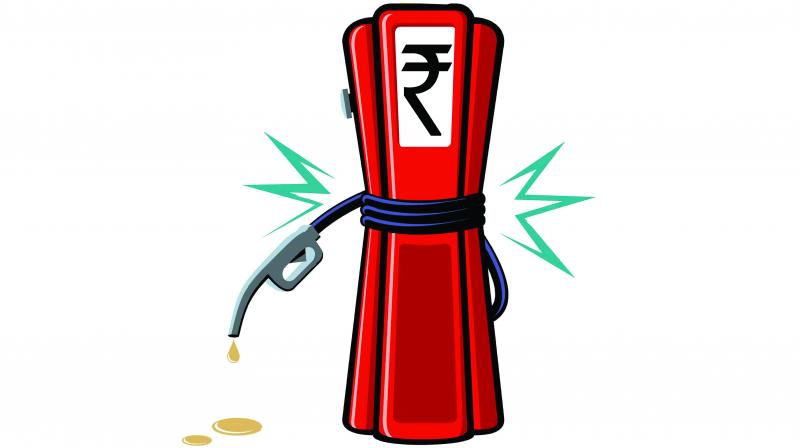 The consequences of all this will be unpleasant and will require very deft economic management.

Oil prices are once again on a roll after ruling far below the peak it reached in 2011-2012 giving an opportunity to a world badgered by the financial crisis to readjust its economies into stability if not on a sustained growth path. India used this window of opportunity to engage in a monumental exercise of demonetisation and introducing the Goods and Services tax for the country as a whole. Economists would agree that if a country had to make any paradigm changes in taxation system it should avail itself of that opportunity when it had not to struggle with external shocks or internal instability and stress. On this matter India chose wisely.  It is struggling with the various issues pertaining to the GST. With petrol and diesel being outside the scope of the GST, the continuous rise in oil prices has put it in an awkward situation of having to raise the price of both on a market determined basis.

It cannot go back to a regime of administered prices having given it up progressively with an avowed policy of reducing the fiscal deficit and closing the revenue deficit gap.

Where does India stand now?

India’s oil imports have steadily increased from 171 million metric tonnes in 2011-12 when oil prices had already hit the roof to a record high of 219.15 million tons in 2017-2018.The import bill which was $139.7 billion in 2011-12 had declined dramatically to a historic low of $64 billion in 2015-16. In 2016-17 the imports rose to 213.93 million tons and its bill to $70.19 billion and in 2017-18 to 219.15 million tons and $87.725 billion respectively. During this period inflation was under control and gave headroom for the government to commit to much larger investments in the infrastructure sector and also increase spending on many other social sector schemes such as education, Swach Bharat Mission, agriculture and health. The government has also cleared thousands of crores of purchases for the modernisation of its defence forces.

Investment in the private sector lying dormant due to various scandals and the huge NPAs of the banking system has started picking up again. Investors are optimistic in the wake of the slow but steady resolution of the NPAs and the steady rise in the rate of economic growth after the shattering effects of demonetisation on the  small and medium industries sector the mainstay of the organised sector employment and even exports.

With elections forthcoming in many states and the elections to the central government. itself not too far away, the opposition parties are using the opportunity flay the government on its oil pricing policy. Further the steady rise in international prices of oil, increasing imports of capital and consumption goods and India’s inability to accelerate the growth of its exports has led to a widening current account deficit reaching 2.5% of GDP. The inevitable fall in the value of the rupee to a level of `72.6 to a dollar in recent times has sent all the wrong signals about the management of the economy.

The ratio of short-term debt (original maturity) to foreign exchange reserves increased to 24.1 per cent at end-March 2018 (23.8 per cent at end-March 2017)."(RBI Press release 29 June 2108). On the external debt, much of it is owed by the private sector. Who are the debtors? Have they any commonality with those who have NPAs with the Indian Banking system? What is their current balance sheet position and will they be able to service their debts even when the rupee has taken a big hit are questions that do not seem to have attracted any public attention but have great relevance to the economic stability and credibility of the country.

The author dealt with the SEA crisis of 1997 as a member of the Board of the IMF and has witnessed how reserves depleted in hours even of a country like South Korea, which was an export surplus country, so were Thailand and Indonesia. Can India withstand an external default shock by any company of India that fails to discharge its obligations? Is anyone in the Finance Ministry or RBI even looking at this danger with any seriousness is not clear.

Ill informed and emotionally charged politicians call for reduction in the price of diesel and petrol. Considered rationally from a national perspective it would be disastrous for the country to reduce taxes on them for more than one reason. In the entire EU and even in the US the basic price of diesel and petrol is less than 50% of what it is sold at the retail outlets. In the case of the EU countries taxes account for about 50%. If taxes are reduced in India only the well off get the immediate benefit but the country cannot afford to lose tax revenue or be in position to pay for the imports at increasing price of crude oil. If the price of crude touches $100 per barrel and thanks to Mr. Trump it could, India will have to fork out at least $60 to $70 billion more per year draining our reserves. It could also have an impact on the rupee making it a double whammy. It will worsen the overall economic situation via transmission effects slowing growth disastrously.

Indian foreign exchange reserves are not composed of trade surpluses as in PRC or in other SEA countries but mostly of NRI deposits, funds of portfolio investors and FDI. It is irrational to look at our FE reserves and say we are in the comfort zone. We are not but, on the contrary, very delicately poised. Even with all this the government is committed to reducing the fiscal deficit progressively. It requires to be kept in mind that besides the fiscal deficit of the central government the economy has also to reckon with the fiscal deficit of the states. Even with the UDAY burden not resting on their shoulders, the state governments were to revert to well below 3% fiscal deficit threshold in FY18-2.7% —but the RBI, analysing the revised estimates of 29 sates, put their combined deficits in the year at 3.1%.

So what can be done under the circumstances?

1If the government wants to put the country above the elections they should not under any circumstances reduce taxes on petrol and diesel and should allow the prices to be market determined. This may undoubtedly have some inflationary effect but to suffer it would be better than reducing taxes and benefitting only a small fraction of the population of the country who are the most vocal.

2Make an all out effort to push exports so that the CAD is brought down and eventually create a marginal trade surplus.  It is imperative that the govt. solves the problem of refund of GST on exports immediately. There are easy solutions to it but govt. seems to be woolly headed on this so far. Generating a trade surplus must be put on a mission mode.

3Consciously ask all governments to reduce government consumption of diesel and petrol. It is easy, as the author has successfully implemented such a measure under different circumstances in the then state of MP.

4PM must appeal to the industry in India to save consumption of diesel and petrol by 10%. This is not impossible.

5RBI and the Finance Ministry must examine every individual outstanding external commercial borrowing by the private sector to ascertain their ability to discharge their debt service obligations and push them into earning foreign exchange.

6Keep a careful watch on import and export prices of goods and services into and out of India as there have been respectively of notorious cases of over and under invoicing.

7The country cannot afford to get into a populist syndrome at a time when the economy is trying to break out from its slumber.

The challenge facing the country now is a golden opportunity for it to become an export surplus nation and forever get rid of the periodical fear that grips the nation on account of uncertainties in the oil market.