DMK carried the 2G stigma for too long; in fact, much more than the Congress whose leader Manmohan Singh was at the helm. 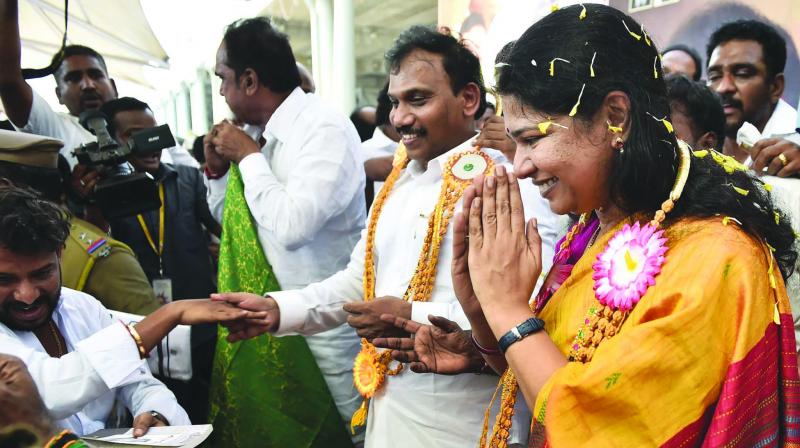 On December 21, everything turned topsy-turvy when the Special CBI judge O.P. Saini acquitted former telecom minister A Raja and DMK’s Kanimozhi of all charges in the seven-year-old case.

Chennai: For three elections since 2011, the BJP made 2G spectrum allocation the nucleus of its election campaign across the country, especially in Tamil Nadu, by launching a no-holds barred attack against the DMK accusing it of being “immersed in corruption”.

And, since the anti-corruption mood dominated the country fuelled by the Anna Hazare movement and BJP’s PM candidate Narendra Modi’s “clean image”, the DMK was decimated in two elections — 2011 Tamil Nadu Assembly and 2014 Lok Sabha — though it came within sniffing distance to rule the state yet again in 2016.

“Prominent state leaders were involved in the 2G scam while we are working towards Digital India. Money from the recent coal auctions has been utilised to serve the poorest of the poor, unlike the past when money was looted,’ said Mr Modi in Chennai during the 2016 Assembly election campaign directing his barb against the DMK, though he spared his long-time friend and ally Jayalalithaa, who eventually got her mandate renewed for five years. But her political journey was cut short.

DMK carried the 2G stigma for too long; in fact, much more than the Congress whose leader Manmohan Singh was at the helm. But on December 21, everything turned topsy-turvy when the Special CBI judge O.P. Saini acquitted former telecom minister A Raja and DMK’s Kanimozhi of all charges in the seven-year-old case. The BJP, especially Prime Minister Narendra Modi who made the 2G case a centre point of his crusade against corruption in 2014 and in the 2016 Tamil Nadu Assembly elections, were left with egg on their faces. But the ruling party at the Centre was cautious in its response: It singled out the Congress saying the verdict was “not a badge of honour” for it since the Supreme Court had already cancelled 122 2G spectrum licences.

At face value, the verdict might just look as an embarrassment for the BJP, but it has landed the ruling party in a catch-22 situation. The verdict can well be used by the BJP to rope in the DMK, poised to install its sixth government since its inception in 1949 whenever the state goes to polls, in its pursuit of letting the “lotus” bloom in the heart of the Dravidian land.

The opportunity also comes at the right time when the BJP looks bruised after having burnt its fingers by unsuccessfully implementing several ideas to get the AIADMK alive and kicking. The BJP, which hoped to reap rich political benefits in Tamil Nadu following the demise of its ideological ally J. Jayalalithaa last December, is now largely responsible for the rise of T.T.V. Dhinakaran, a nephew of Sasikala, as the future leader of the party.

The 2G verdict could provide more ammunition to BJP’s long-held aim of a “Congress Mukt Bharat” (Congress-free India) by unsettling the Congress — DMK alliance that is going strong in Tamil Nadu.

But, here comes the BJP’s dilemma — how can the 2G case be dumped once and for all — it was and still could be the most potent weapon against Congress that is now showing signs of resurgence.

If DMK is on one side of the 2G coin, the Congress is on the other. Without one side, the currency would lose its value in a country that has learnt its value after demonetisation.

BJP insiders say the Modi government should never be diluting its stand on corruption since that was the single-most important issue that catapulted the then Gujarat chief minister to Race Course Road with a brute majority that no leader could manage since Rajiv Gandhi in 1984. They also point out that an appeal in the case would “politically help” BJP to keep the issue of “Congress’ corruption” alive in the next elections. In that case, the BJP would be accused of “double standards” if it aligns with DMK and targets only the Congress for 2G.

It would not be prudent, sources say, for BJP to go for an appeal and align with DMK since that would amount to diminishing its “anti-corruption” plank. Politically speaking, the DMK would prove to be the best for the BJP that is struggling to make inroads in southern India.

The DMK’s clout seemed to have weighed heavily on Modi’s mind when he made an unscheduled stop at DMK chief M. Karunanidhi’s residence on November 6 during his short visit to Chennai.

The DMK will certainly use the 2G verdict to its advantage,  but the BJP must choose between two difficult options – its future in Tamil Nadu or its pivotal corruption plank that pumps blood to its existence.