There are three ways of ensuring equality of opportunity between the sexes — free access, affirmative action and reservation of seats 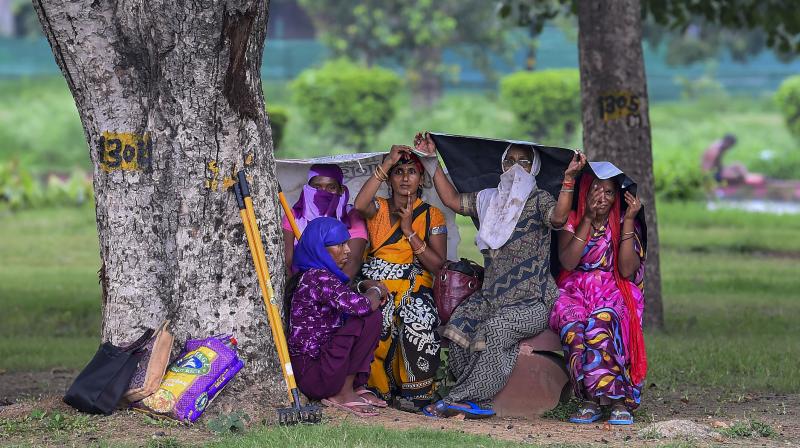 Women covers themselves with sheets during rain, in New Delhi. PTI Photo

What are women’s issues? Contrary to commonplace belief, they are not necessarily LPG subsidies, or women’s coaches and CCTVs.

But they could be women’s freedom of independent movement or mobility, access to schooling, food and birth control, and visibility within the workforce insofar as their identity as workers are concerned instead of being stereotyped as ‘housewives plus’ so that they, too, can avail what the government holds out to their male cohorts by way of livelihood opportunities.

They could also take the form of evaluating the economic value of the service most of them perform in terms of domestic labour and instituting for it a fair remuneration.

Experience shows that our policymakers do not notice these issues. So how about an all-women party to push forward the cause? After all, it’s only honourable that women take responsibility for their own well-being, growth, rights and quality of contribution to society.

There are three ways of ensuring equality of opportunity between the sexes — free access, affirmative action and reservation of seats.

The case for an all-women party becomes all the more urgent seeing as the women’s reservation bill has been hanging fire for 12 years and at the panchayati raj level, where 33 per cent reservation has been implemented, many of the elected are being seen as stooges of their husbands, or worse, more malevolent forms of patriarchy.

Clearly, whether equity of outcome or equality of opportunity is the goal, reservations are not the final answer.

Say, we form a women’s party. Luck (sortition), and not election experience or ‘winnability’, will be the criterion for handing out tickets within this women’s party (it will perhaps make for grooming of many good leaders and save it from the trap a certain young Delhi-based, and now Delhi-confined, party has fallen into).

Turncoats may avail party membership but will be barred from this draw of lots. The left/right nature of electoral politics excludes perspectives and concerns falling outside particular party agendas — these are deliberately kept out for fear of misperception of ideological dilution on the part of the electorate.

One advantage of sortition over intra-party elections will be that, not being partisan in the old sense of the word, new members will bring to the table many more of these perspectives and concerns.

Just as a dalit party is not anti-brahmin, and a Dravidian party, outside of domicile issues, does not necessarily militate against north and east Indians, so also a women’s party by definition will not be an anti-men party.

Men are expected to trust the party enough to vote for it — if they do not it is their loss, but they do have the option of changing their mind after five years.

In any case the women’s party manifesto, and hopefully a five-year term, will have brought many of the real women’s issues into the general policy agenda.

What are these issues? What will the (imaginary) manifesto look like? Take a sneak peak.

1. Identity cards for female farmers. In terms of sheer numbers, women’s best productivity is in the field of agriculture. Arguably, they number slightly more than male farmers. Yet only 12.7 per cent of them actually own land and hence miss out on the fruits of all the schemes the government provides for the kisan bhai.

2. Reasonable minimum support price for forest produce and forest rights. Women constitute a majority of forest workers. Yet they are being evicted from their places of livelihood in the name of development. A speedy hearing of their lawsuits will also go a long way towards ensuring their right to livelihood.

3. Universal service income to cover cooking, cleaning and chores performed by family members (of any sex) and domestic labourers

4. Gender-neutral laws. This puts paid to fears of a woman’s state denying men their rights. If laws are well-implemented, the interests of everyone, including women, will be protected. Women do not need additional safeguards.

5. Law reforms. According to the Hindu Minority and Guardianship Act, 1956, the husband of a married female minor is her guardian, even if minor himself and having a guardian in his father. The same law stipulates that the natural guardian of a Hindu minor is “the father, and after him, the mother”. Then again, the Special Marriage Act provides sanction to disinherit from ancestral wealth any Hindu who resorts to a civil marriage, which is an option available to those who wish to marry outside the community (without converting the spouse). The list goes on.

6. Bar on the face veil. In the name of so-called multiculturalism/diversity, women cannot be denied identity, rights and agency.

7. A special law against honour killings because it holds back society in deeply normative ways

8. Abolition of the women and child ministry. Because it is not as if women are a real minority and for democracy’s sake, men who run the government needs must deign to accept the consensus developed within this group regarding various issues pertaining to their interests and cause. It is women and men who together created the social contract and together they must reform or refine it.

9. Educating the mother. Mothers are the honorary patriarchs of the family. It is they who perpetuate patriarchy, by not letting daughters travel independently and expecting daughters-in-law to do the housework. While it is time for feminists to reclaim the roles of the behenji and the ‘aunty’, it is moms who must face social pressure, not only to teach their sons to cook and ‘respect women’ but to teach them by example.

10. Inclusion of women in RWAs and local recreation clubs. This will lead to more sporting and artistic pursuits and possibly pave the way for the end of the institution called arranged (forced, or coerced) marriage.

There is already a women’s party in existence; it’s called the Women Empowerment Party. But it does not have this manifesto and it has male members. It also does not contest the general election.

There is also the newly launched National Women's Party that has among its goals women’s safety and 50 per cent reservation of seats for women in parliament. Women’s safety is frankly not a priority for this party. Because freedom is.

Would you vote for the new women’s party?