Ajeet and Deeya Bajaj, open up about becoming India’s first father-daughter duo to successfully reach the summit of Mount Everest. 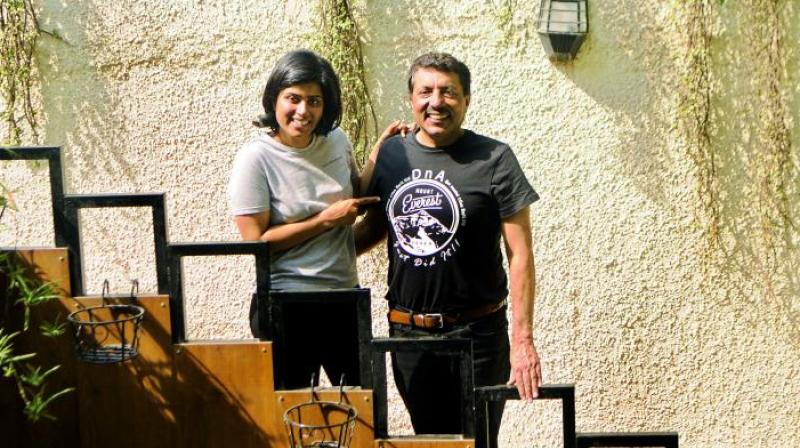 Ajeet Bajaj and his daughter Deeya

On May 16, Gurugaon-based Ajeet Bajaj and his daughter Deeya climbed 8,848 metres to become India’s first father-daughter duo to successfully reach the summit of Mount Everest.  For the 53-year-old father, the feeling of climbing Mount Everest was overridden by seeing his daughter Deeya already at the peak, watching the sunrise from the top of the world. Deeya had reached the summit 15 minutes before her father, who had encountered some oxygen mask related problem.  “I was looking for her when I reached there. I cried when I saw her. It was like a dream come true, seeing my daughter at the top of the world,” said Ajeet. There was a brief moment, half an hour before the summit when Ajeet thought he would not be able to make it, when he had some issues with his oxygen mask. “I didn’t know what was going wrong with me and I was suddenly finding it difficult to move. As it is you take five to six steps and then stop to recover but suddenly it became very hard for me, I kept pushing myself and the whole thing (the mask) was jammed and I thought my summit attempt is gone and I had to take a decision. So, I asked her to go,” he said.

Deeya kept on climbing, though slowly, looking for her father, who joined her at the summit 15 minutes later at 4:45 am on May 16, after getting his mask fixed, to become the first Indian father-daughter duo to have climbed the world’s highest peak. Even though they couldn’t reach the summit together, it was the feeling of sheer euphoria and delight for them to see each other there.  “With this little chaos that happened, both of us got very emotional, meeting each other at the top. We had started climbing together, had done some of the difficult bits together. So we hugged and proudly pulled out the national flag and got some photographs taken. This was my most memorable trek because she was with me. It was a delight to be with each other, to have that kind of trust and faith,” said an emotional Ajeet, reminiscing his moments with his daughter at Mount Everest. 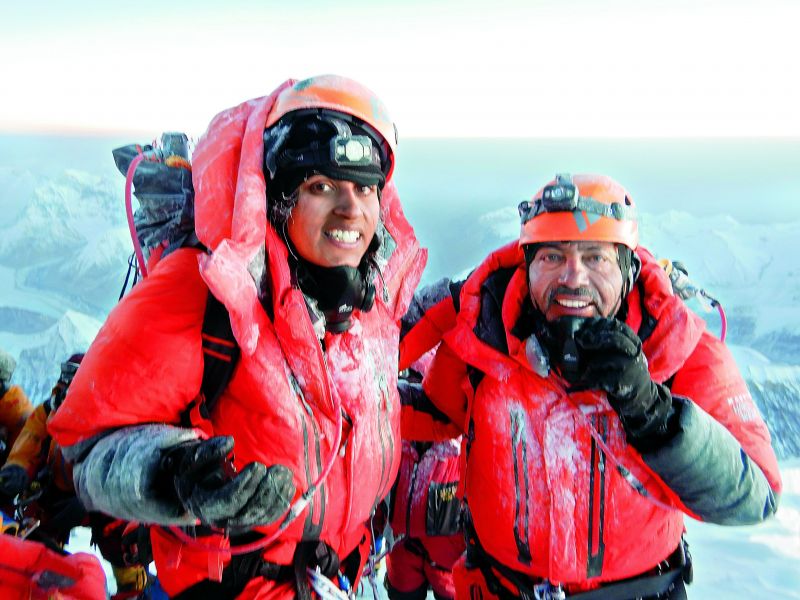 How is to do such an arduous climb with a family member and 24-year-old Deeya said, “Altitude does mess up with you. You can’t eat, sleep, you don’t feel like doing anything and climbing with your dad definitely adds another dynamic to it. Being with your dad 24/7 can be a bit difficult and I did get cranky and irritable at times.” However, Ajeet quickly added, “But I think we were focussed overall. We both wanted to get up, it remained positive. We were a good team. We had our minor disagreements, but we were always in sync.” This was not their first expedition together and the duo has had many adventures since Deeya was a child and has made records before, both, individually and together. Ajeet, a Padma Shri awardee, has been into adventure sports for over three decades now. He was the first Indian to ski to the North Pole, the South Pole and across the Greenland Ice Cap-completing the ‘Polar Trilogy’.

In 2008, then 14-year old Deeya was the member of a sea kayaking expedition along the west coast of Greenland. In May 2011, Deeya, at 17 years, became the youngest to have undertaken the Trans Greenland Skiing Expedition. In July 2012, Deeya summited the highest mountain in Europe, Mt Elbrus, 5,642 m. Ajeet and Deeya also became the first Indians to ski across the Greenland Ice Cap. “I liked doing adventure sports and outdoor activities since I was a child, but I didn’t like mountaineering much initially and he used to push me. I used to be mad about waking up early as my friends got to sleep but somewhere along the line I started to enjoy it and getting the opportunity to do all these things,” said Deeya.

It was three years ago when the “adventure buddies” talked about climbing the Everest. Ajeet was visiting Deeya when she was in college and discussed about doing it once she graduates. Training and practise for the Everest was the primary goal in the duo’s life in the last one year. “We focussed a lot on gymming, swimming, running, etc to make sure our bodies were at the peak of their physical fitness. We did four practice expeditions, two in Ladakh, one in France, and one in Nepal. Basically doing high-altitude treks, just getting in sync with each other,” said Deeya.

There were a few moments during the climb when they were apprehensive that they will not be able to make it. “There was one day when there was a really big storm when we were at camp two, when the entire tent was shaking. It felt like we were going to be blown off the mountain, or the tent would tear, and dad thought we would have to go back. The weather was too bad to keep going on but next morning when we woke up, it was fine,” said Deeya, to which Ajeet added, “There are so many things that can go wrong, that stress is always there.”

Ajeet was only nine years old when his father took him for his first full night trek and since then there has been no looking back. The first time he gave it a thought of climbing the Everest was when he met Edmond Hillary while studying in St Stephens. Ajeet, along with his wife, started Snow Leopard, an adventure tourism company, in 1990 and Deeya has now joined her parents in running the organisation. “It’s hobby, passion, and profession all rolled into one. I am lucky to be doing this,” he said.  The big part of the expedition was giving a message about girl child, that girls can do anything and can reach any height if they have the support of their families. Climbing mountains together will become a norm for them from now onwards, said the father. Next on their mind is Vinson Massif, a large mountain peak in Antarctica, in the coming winters. “But we want to give the planning a rest for now. Also, we will have to take permission from the high command,” said Ajeet laughingly, referring to his wife and Deeya’s mother Shirley Bajaj.

Ajeet Bajaj and his daughter Deeya.