After attaining super stardom and scores of fans all over the world, the stars are aligned for Rajini’s political plans. 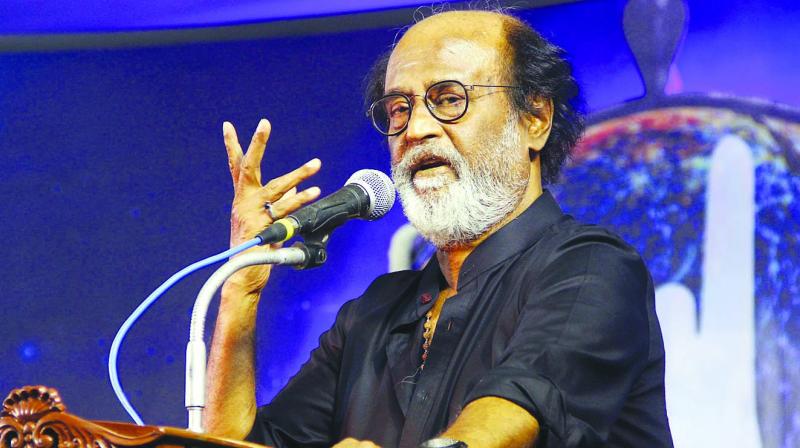 Coming from humble beginnings, actor Rajinikanth has risen through the ranks to achieve the cult status of one of India’s most popular actors. And this status is not limited to the South, to which most of his movies belong, but his appeal is pan-India. Rajinikanth’s mass popularity is largely because of his typical mannerisms and stylised dialogue delivery. He has been conferred with India’s third highest honour, the Padma Bhushan, and has worked as a screenwriter, film producer and also a playback singer.

Before Rajinikanth started his acting career, he used to practice stunts at a Hanuman temple near his house and while working as a bus conductor in Bengaluru, he nurtured his acting ambitions by performing in stage plays. After completing a basic course in acting from the Madras Film Institute in 1973, Rajinikanth made his debut in Tamil cinema in supporting roles, first as a cancer patient in Apoorva Raagangal in 1975, after which there was no looking back.

Now, at 66, as he ponders entering politics, Ganesha peeps into his horoscope and concludes that the stars will definitely favour him as a politician.

Strong Ambition
Rajinikanth has Leo ascendant and the Lord of ascendant Sun is placed in the fourth house, becoming the atmakaraka planet, which signifies a strong aspiration for success, fame and power. Ascendant Lord Sun gives him authority, power, good administrative prowess, popularity, a magical personality and leadership skills — all of which are very important for a career in politics. His vast popularity is bound to stand him in good stead as he prepares to take the political plunge.

Venus lends courage
Venus, the Lord of the tenth house is well placed in the fifth house and in its own house in the navamsa chart. Also, Venus is placed with the eleventh house Lord Mercury. Fifth house is the house of kingship. Venus also owns the third house in Rajinikanth’s chart, and the strength of Venus denotes the ability of a leader to take courageous steps and decisions. Courage is a quality that Rajinikanth is going to need in ample amounts if and when he decides to become a politician.

Jupiter creates a strong public image
Jupiter is placed in the seventh house and aspects the ascendant, giving him a fairly strong public image of a person who is always willing to help the downtrodden sections of society. As the seventh house is tenth from the tenth house, it is also considered favourable for him to get a powerful political status. Also, exalted Mars in the sixth house will boost his political career. With the demise of Jayalalithaa, Tamil Nadu politics needs a person with a strong public image, and Rajinikanth is ideally poised to take over the reins.

A strong inclination towards politics
There are a number of favourable factors for the thalaivar to become a very powerful politician. Jupiter, the Lord of fifth house, is strong in his chart and made him a successful actor. As he is passing through the Jupiter bhukti, he shows a strong inclination to join politics to serve the people. However, Saturn is placed with Ketu. And, as he is passing through the Saturn mahadasha, the pace of his undertakings gets slowed down and results for his efforts also tend to be below-expectations.

May join active politics by end-January 2018
Rajinikanth might make a move around September 2017, but will have to be very careful as the period till January 2018 seems extremely eventful, stressful and challenging, both physically and mentally. There are also indications that he might postpone his plan to join active politics till the end of January 2018. However, as the legions of his fans would agree, it is better late than never.