Age on Sunday   04 Oct 2020  On the deck of The First Ship: Officers who commanded INS Viraat go down memory lane
Age on Sunday

The Viratees have retired but their memories of and on INS Viraat are still fresh, and they are transported right back on her deck 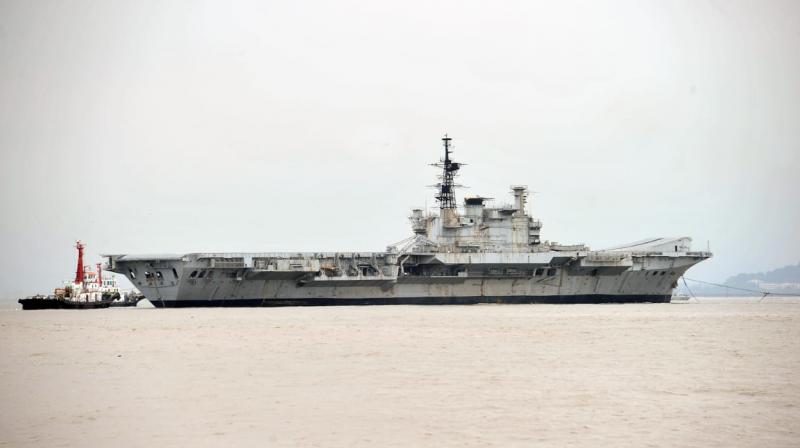 In 2007, a couple in grim conditions in Indonesia were apparently seen leaning against the hull of the Indian Navy’s aircraft carrier, Indian Navy Ship (INS) Viraat. And when the couple were asked to step up, for the ship was open to visitors, the couple said, “Hum to bas issey chhune aaein hain (We have come to just touch it).”

It is emotional as much as gratifying for all the Viraatees (as the officers who commanded INS Viraat are called). The Viratees have retired but their memories of and on INS Viraat are still fresh, and they are transported right back on her deck, where they stood for the night watch or were preparing to launch a sea harrier for the next sortie.
Viratees recollect their time on the ship not as a job but as life itself.

India brought the tenth Hermes and named her as INS Viraat, which later became the eleventh incarnation of the ship, and commissioned her into the Indian Navy on 12 May 1987.

An integral part of Indian defences

But now, Indian Navy’s second aircraft-carrier ship, which was in the services for 29 years before being decommissioned in 2017, is headed for the last leg of her journey to Alang in Gujarat, leaving the Mumbai Port on 20 September.

Some of its commanding officers, including Admiral Arun Prakash, Admiral DK Joshi and Vice Admiral Pradeep Chauhan have gone on to become Chiefs of Naval Staff in the Indian Navy.

But for them, nothing compares to the sheer honour of having commanded the big lady. As they talk to us, the Commanding Officers feel privileged yet deeply humbled to have commanded the most regal warship.

Now, with a heavy heart, as the magnificent centaur-class aircraft carrier casts off the lines, these officers, still mentally on board, rise in salute and bid her ‘Happy Hunting’ in the great waterways where great ships and warriors await their call.

“There she must bide her time until her next reincarnation when she will once again see the White Ensign aflutter and be once more India’s pride and joy,” says an emotional Vice Admiral Chauhan.

That top of the world feeling

If you ask me whether I would want to do it again, by all means I would love to. It was a top of the world feeling. When I took over INS Viraat, she was to undergo a major refit in Cochin and she was to be sailed across from Mumbai to Cochin.

Everybody told me that much of my tenure would go in repairing the ship, but we went about the task and refit her four and a half months ahead of schedule.

And it came out that we had to compress the time for squadrons in Gujarat. We normally would have waited for the squadron to come to Goa and then wait for another few days.

But much to the subsequent delight though initial apprehensions, we sailed the ship up to Gujarat and embarked the squadron directly from the air force base.

It was quite a monumental action, and squadrons were delighted to see that the ship had gone out of its way to welcome them. And then we began sailing from there for seven months nonstop. It was a delightful feeling that would go down with me when I am hopefully lowered into the water at the end of my life.

Operation Parakram was the first time ever when the Viraat entered a foreign port after its deployment in 1987 after she came from London. We entered the port of Abu Dhabi and when we were there, another newly built French aircraft carrier “Charles de Gaulle” entered the port. The coincidence was that INS Viraat was the oldest aircraft carrier in the world and the French one was just a couple of months old in 2001. But in Abu Dhabi, INS Viraat garnered more publicity and curiosity than Charles de Gaulle did.

‘My bond with the ship is deep & sentimental’

Viraat afforded me my greatest learning experiences — both professional and human, and my bond with the ship is deep and sentimental. I remember my very first sight of the then HMS Hermes, back in 1983. We were choppered across for deck-landing qualification (DLQ) off Plymouth. We were DLQ on the old Sea Hawk, which used to ‘land and then stop’. But this was different — the Sea Harrier ‘first stopped and then landed’. After an exciting day, we departed Hermes, DLQs in hand. We had no idea then that she was destined to become ‘Mother’ for Indian Navy aviators.

When we welcomed INS Viraat, it was a typical monsoon day with frequent rain-squalls, gale-force winds and heavy seas. As the ship rolled and pitched, we peered anxiously through pouring rain for the first glimpse of INS Viraat. And then she emerged from the gloom, this famous, majestic warship, flying Indian colours. The Western Fleet proudly rendered ‘Teen Jais’ to welcome its new flagship.—Admiral Arun Prakash, PVSM, AVSM, VrC, VSM, ADC (Retired), who commanded the Viraat in 1990–1991, and was one of the officers who welcomed INS Viraat along with the then Prime Minister Rajiv Gandhi on board