Sexy Hrithik not game for risks

The success of Super 30 was very important because it was a make or break for my faith and belief in my instincts, says Hrithik. 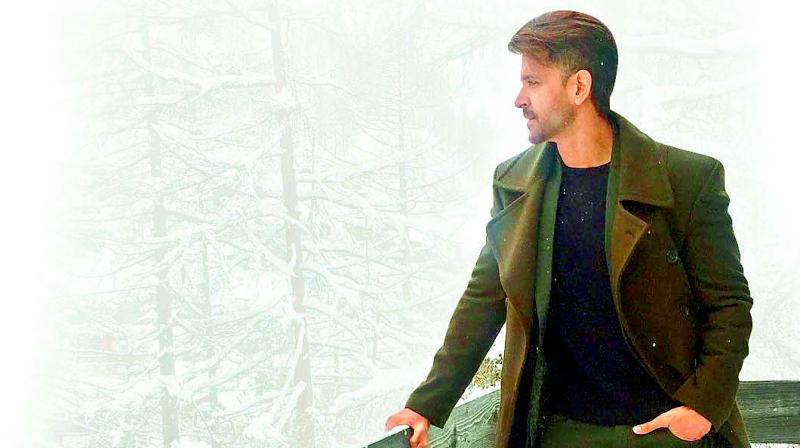 Hrithik Roshan’s killer looks, hot body and dance moves make many women (and some men) go weak in their knees. But Hrithik, who became an overnight superstar with Kaho Naa Pyaar Hai (2000) has tasted success and failure in equal measure, believes in a ‘lot of action’ and ‘playing it safe’. Now, wait a minute before you go supine and get some naughty ideas — our desi Greek God is talking about his choice of roles in movies, including his latest action-packed thriller WAR.

You have picked characters that not every mainstream actors would do, be it Super 30, Guzaarish, Fiza or Kaabil. Do you believe in taking risks as an actor?
No not really. The risk would be to do a film in which I am not guided by my instincts or just by the box office or calculation. Doing something I do not believe in is a risk. Doing things that I believe in can’t be a risk. For me, a risk would be to jump into something that I don’t believe in. I don’t take any risks. I feel very safe and make sure it is all calculated. I have always kept myself safe. I know how to be safe in uncomfortable places. I find my way to comfort and safety.

Do you feel the success of Super 30 (a non commercial movie) will help you push your next film WAR any further?
The success of Super 30 was very important because it was a make or break for my faith and belief in my instincts. I somehow have the knack of feeling empowered whether it’s success or failure. To be honest when Super 30 released, in my head the first half of the day I assumed it had not worked because the jump happened the second day. I thought it was a failure for a brief period. On the second day it turned out to be a huge success. I have the knack to feel empowered in whichever situation I am. It helps all the films that follow. It helps my curability and the foundation on which I stand. It is a reassurance of my instincts.

You were criticised and called a misfit as Anand Kumar in Super 30. Did that affect you?
It doesn’t affect me. It drives me further and of course I take a second to analyse if there is any truth in the criticism. There was a lot of chatter before this movie. There were talks like I was a misfit. I have gone mad. So it feels good when that’s all proved wrong. I poured my heart in Anand Sir’s character in the movie. The criticism did not bother, as I knew I was right. It drove me further because now I have a chance to do what people think I can’t do.

What made you do a film like WAR?
My character in the movie does not know how to define himself and that is what attracted me. The mystery and unpredictable nature attracted me to the character. Till the end of the movie, you don’t know if you can trust this guy. He is dangerous and could be the best person, but you would be afraid of him. He is unpredictable and that’s what made me pick this role.

While other actors do two or three movies in a year, you do just one?
I have come to realise that this is my style. I am in love with cinema, not box office.  My love is making movies that satisfy me from within. I am a collaborative actor. I collaborate with directors and producers. I collaborate to make good movies and enjoy taking time to do that. It is not a waste of time. This year I have two movies, but one of them got delayed.

You are the original superhero of Hindi cinema. Krrish redefined the superhero concept in Indian cinema but why are we still lacking in that genre?
It is difficult because we are trying to start off with Krrish 4 and I am very aware of the problems. It’s something that we are solving every single day — how do we make a good film in a budget and yet be worthy enough to be compared to other superheroes. It is tough, not an easy job. I think if we walk the line and have our strategies in place, a good storyline, special effects and infrastructure for a superhero movie, it will work. Right now we are lacking a bit and that’s why it’s not being made.