Sapphire waters up in the hills

Undeniably, one of the country’s most amazing natural sights, Pangong Lake now finds itself in dire need of preservation from thrill-seeking tourists. 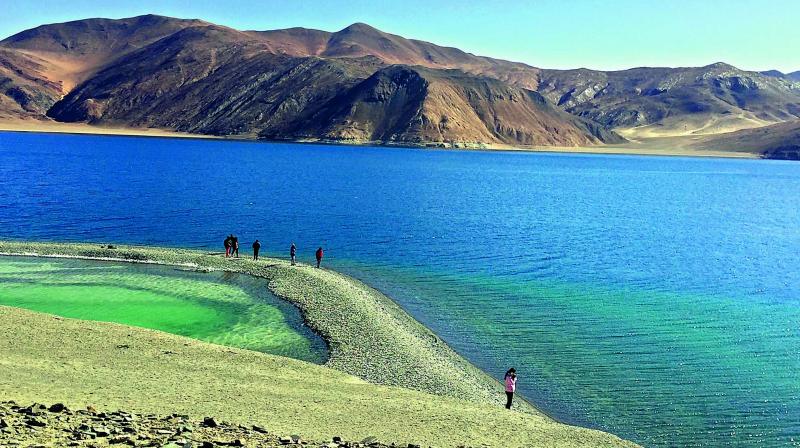 It’s a bit like seeing the Taj Mahal. You see photos of it, that seem to capture the monument in all its beauty — ethereal, beguiling, cool and perfect. Then you see the real thing. The first sight is disappointing, the photographs were so much more real, you think. But as you draw close, the pulsating marble, its perfect symmetry and the scale of it all, seeps into the consciousness. No photograph, you realise, can do it justice.

Pangong Lake, or Pangong Tso, to give it its proper name, is like that. The photographs are breathtaking and capture it in myriad moods, but the real thing is far better. It reveals itself to us as we ride a rough road from Nubra Valley to the lake, through mountains that seem studies in contrast. White slopes stand within touching distance of brown or dark ones, the texture of one as different from the other as chalk from cheese. Through them, the road winds, and far away, a gleam of turquoise catches the eye. Then, it is lost.

When the curve in the road brings us upon the lake, it is a jolt. The colour, the shimmering turquoise vastness, and the edging of beige sand along the meandering shore... it is like a slice of the Mediterranean transposed into the heart of a desert. Yet, for all its beauty, Pangong Tso is a desert too. The brackish water, locked by land so desolate and high that it freezes the water solid in winter, ensures there is no life possible in its depths. The clear water belies an inhospitable environment; only a few crustaceans find sustenance by its edges.

It is a large lake, stretching more than 130 kilometres. The far side vanishes out of sight and walking along the lake can land one in Tibet, if the terrain allows such adventure. It is three in the afternoon when we reach, a bit weary, somewhat hungry. The route has been fraught with tension. 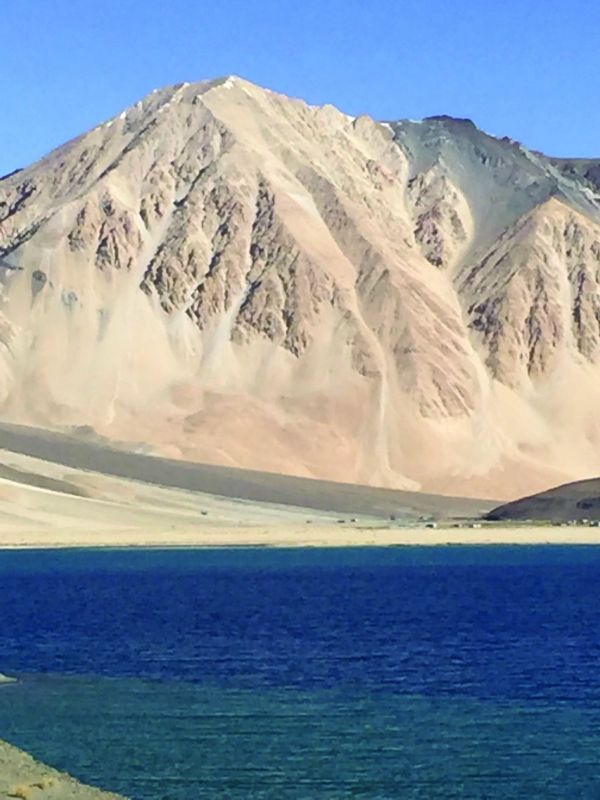 Pangong lake stretches to Tibet. The snow peaks in the distance are seen all through the year

Many years ago, during a visit to Ladakh, my trip to Pangong had been aborted by a stream that had turned vicious with the rising heat. The gentle trickle over a dip in the road across which cars could ply without a second thought had turned into a raging torrent. Even as we debated whether it would be wise to cross, a vehicle from behind  had rushed in, to find itself stuck awkwardly among the newly deposited stones and the rushing waters. It took the labours of a tractor to pull it out to safety, and signalled the start of our retreat.

The story of the ‘shaitan nala’ fresh in mind as we drove along, did nothing to allay our fears. But we need not have worried. The nala was not on this route. Yet, our driver seemed impatient at every halt for photos or tea, and it was only as we entered a vast river bed which had to be negotiated in first gear that we realised this was a more formidable hurdle than the nala I had encountered. Fortunately, a severe, long winter still held the snow in thrall, and kept the river bed dry.  The sight of the lake dismissed the tension. But it was cold. Windy and cold. And worse, it was noisy.

Though it has always been a top attraction for tourists to Ladakh, Pangong Lake’s level of popularity has hit maniac proportions after it was shot as part of the climax of Three Idiots. The cast including Aamir and Kareena spent a mini schedule there, but their presence lingers. It is apparent in the many cafes that carry the film’s name, in the ugly cut-outs that stand awkwardly, in the plastic seats that the three idiots occupied in the film and which demand Rs 50 from each new idiot who wants to fit his butt in.

Evironmentalists worry about the inumerable vehicles that bring selfie shooting droves to the site; the resultant litter, and damage to the living creatures that inhabit the region, often living under the soil’s surface. But the lake continues to draw crowds. 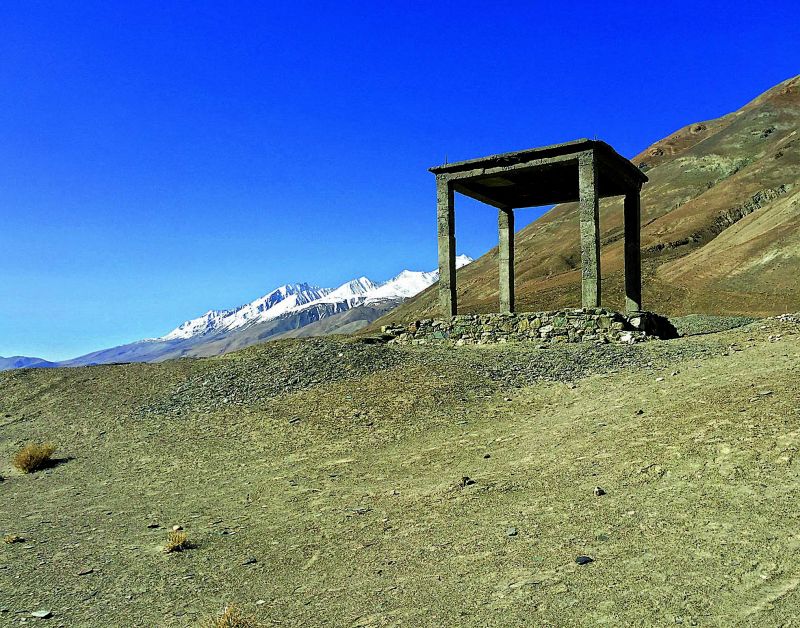 Unlike most of the visitors, we planned to stay overnight. And though they are more expensive than the hotels further away, we booked ourselves into tents. The evening was spent bird watching. Black headed gulls are obvious visitors; the lake also sees ducks and geese flying in at other times of the year. I take part in a small adventure, climbing a hill behind to check the state of my lungs. Despite the 4,250 m, climbing is surprisingly easy. At night we count 14 bikers who solemnly roar through like conquering warriors, disregarding the surroundings that demand a meditative quiet.

The tents are a warm refuge from the wind, which tugs and pushes at the canvas walls through the night. Under three quilts, I can shut out the sound, and manage a solid night’s rest. Morning finds the lake quite different. The water has changed to a liquid, tourmaline blue that shimmers and reflects the sun’s rays. It will ripen to the rich turquoise only after noon, by which time we would have left.

By nine, after a breakfast of eggs and toast and tea, we start back. Thought of the shaitan nala whispers alongside, but the mountain is frozen, and the Changla Pass, third highest among the world’s motorable passes, which leads to Leh, is edged with snow. Time then for a quick round of snowballs and photos, and as we wind our way to the Pass, Pangong Lake has shimmered out of sight, leaving a memory not to be forgotten.