Chhetri on a charm

The BFC skipper and India’s favourite footballer is on song when it comes to the beautiful game. 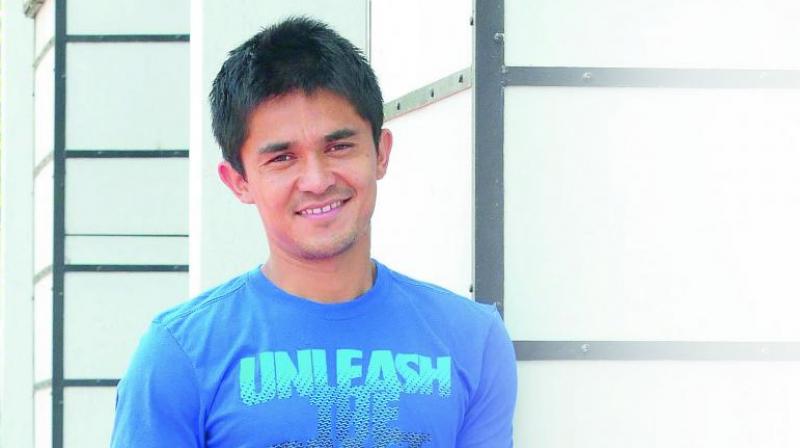 The diminutive figure is at his best on the football pitch, thinking ahead as he continues to inspire his team. Bengaluru FC skipper Sunil Chhetri is at the heart of his team’s fortuitous run, ready to mentor, guide and take the team forward. This has worked like a dream for BFC, who recently won the ISL 2019 being dogged, determined and patient. Adjectives that also uncannily describe their skipper. Chhetri’s tryst with BFC began at its inception, and today, the team has won six trophies in the six years they have scurried and muddied their feet on the pitch. “When one looks back, you are never guaranteed trophies. It is more about work ethic, philosophy, coach, team-mates and training - the main mantras of why we are doing well. It’s because everyone knows their jobs, everyone one respects each other be it the coaching staff, officials, team members, everyone has an incessant desire to improve. Every year, we are even more hungry to do better,” says Chhetri.

Sunil is undoubtedly thrilled at this victory, but believes, “We have to be careful that we do not become complacent and arrogant. Thankfully, we have done well, as there is much more to achieve. We have to keep focused,” adding, “It’s been six years, now. I am enjoying every moment of it. I have to kept at it, and am fit, and have not had any injury, thankfully.”

Sunil also adds a simplicity to his mentorship, “I try to be a positive example. Try to stay calm since the football pitch sees a lot of tempers. The kids learn more by seeing, and not by lectures. I try to conduct myself in a proper manner. I hope these boys can learn from me. I am ready with advice, and I want to believe I am popular and that I am a mentor with my actions,” says the footballer.

The August born boy has lived across the country (Darjeeling, Sikkim, Jammu and now Bengaluru) early on as his father was in the Army. Chhetri got married to his childhood sweetheart Sonam Bhattacharya in 2017 and loves living in the Garden City. About Sonam who he calls “the missus,” he admits that marriage has made him calmer, “I am much more calmer. I have my best friend as my wife, and she gives me great support. She is there as an anchor, somebody to talk to. Having lived alone for so long, one does not realise how a footballer’s life is. I am very selfish about my training, regime, and wins. It’s not something everyone can understand. It is not easy being a footballer’s wife, and since she is a sportsman’s daughter, she understands. It’s like living with a friend. She is also a big fan, and pushes herself to the ultimate to support me.”

Sunil spent Holi with the family after years this March, and posted a very cute photograph of Sonam and him smeared in colour, “I love to relax and spend time with family, as it is very seldom since we are always on the move. This Holi celebration was after such a long time. You miss out on so many things so it was wonderful to be able to celebrate with everyone,” says Sunil, adding, “My wife loves to live in this city. We spend a lot of time at home as we have a great cook (which helps). We love walking on Church Street, visiting Indiranagar for different cuisines, and going to UB City,” says the footballer who’s life on the job has lots of travel. On coach Carles Cuadrat, Sunil is effusive, “It’s lovely — His managing skills, technical ability and brilliance. I am so happy he won the ISL cup in the first year.”

The 12th man in BFC’s journey are the vociferous fans, who according to Sunil are “sensible, innovative, loveable and a family.” As players, he thinks they are very important, and at the crux of what BFC has achieved in the past six years. The striker and winger took a breather to enjoy the silverware afterglow, and is now back on the job training for the Super Cup, and as ISL champions, BFCs chance to play in the AFC.

He was reported to have commended the Indian women's football team recently, and he explains, “They just won five consecutive times. I was not comparing player to player, just stating a fact, their ranking is better than ours, they have huge potential.”

Positive about the beautiful game, he believes good things can happen to Indian football if the government, federation, coaches, players and fans try really hard, and pleads football fans who watch the more fancy EPL, La Liga, “Give domestic football a chance.”