Travel is about the gorgeous feeling of teetering in the unknown. 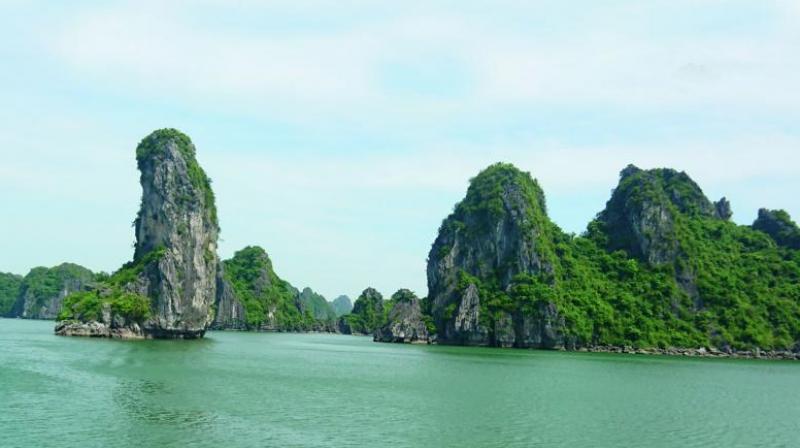 Vietnam: From Ho Chi Minh to Honda dreams... We booked our passage to Ho Chi Minh City (former Saigon) with an onward ticket out of Hanoi weeks later — no set plan in between. A great joy of travel is the element of not knowing what’s next... sights, sounds, culinary treats or even a serendipitous glimpse into local culture and attendant people. Travel is about the gorgeous feeling of teetering in the unknown… 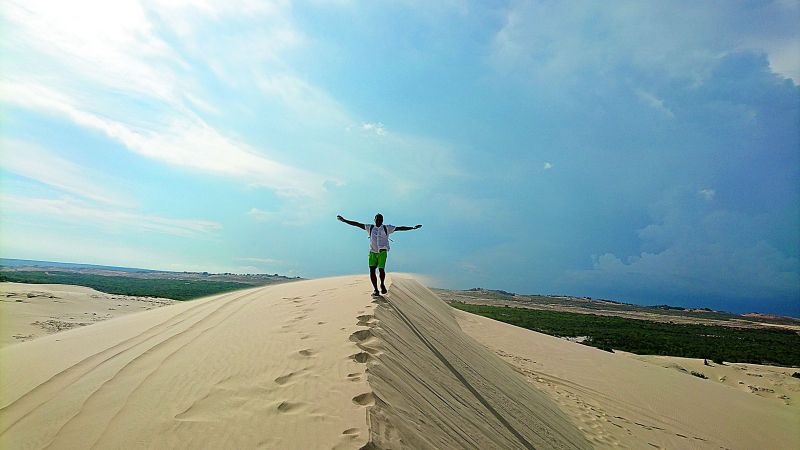 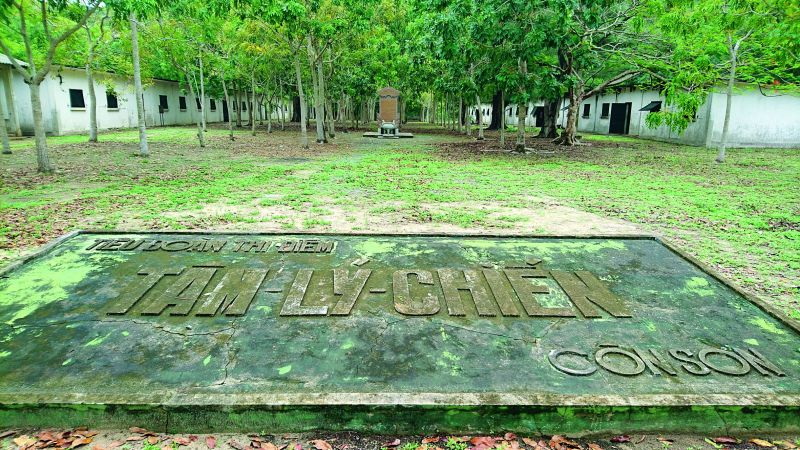 Vietnamese cuisine is delightfully fresh, light and flavourful. People are eating constantly, while counting large wads of Vietnamese Dong — a currency small in value, large in volume to carry. Rice is ubiquitous and consumed in disproportionally large quantities with morning glory (Chinese watercress). Banh Mi is a Vietnamese adaptation of the French Baguette, a delicious snack. There is Pho — the cornerstone of Vietnamese cuisine — a soup of rich broth, rice noodles and fresh ingredients. Most food is accompanied by plenty of crisp lettuce, basil, lime, chillies and fish sauce. Ca phe sua da is Vietnamese coffee — strong, sweet and milky in the extreme, served up hot or cold. 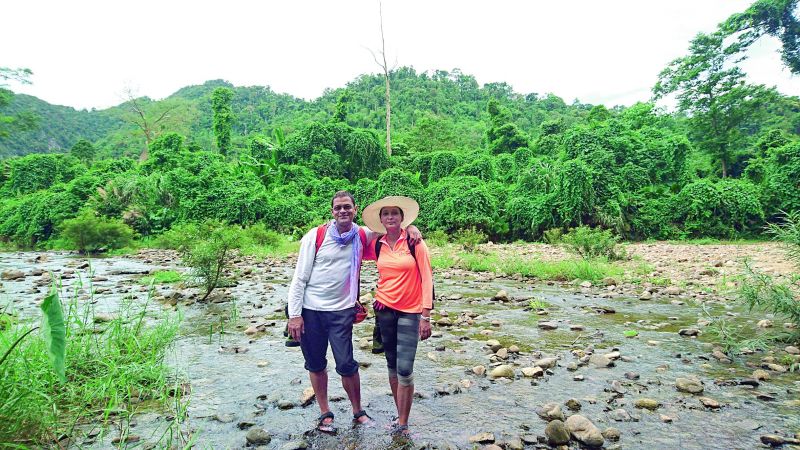 Con Dao are a group of little known islands in the South China Sea. A lush tropical paradise with a bright future and a grim past. Prisoners of war were held here in a brutal penal colony and it is the burial site of a young Vietnamese martyr — Vo Thi Sau, a fifteen year old guerilla who furtively dropped grenades on French soldiers and fled. When put in front of a firing squad she insisted on wearing white so that her blood would stand out in stark contrast. She also declined a blindfold. Most passengers on the flight brought along bouquets of flowers to honour her. We rented a scooter, rode along deserted coastal roads, through jungles and swam in turquoise waters.  Beetles in Con Dao are big, prolific and misguided. Locals referred to us as “Ando”? Strangely, “Indo” is reserved for Indonesians. It seemed that denizens of Con Dao had not encountered Indians before.

Con Son Prison: First established by French colonists in 1862, Con Son prison was taken over by the Americans and later transferred to the South Vietnamese government. Captives were political dissidents, communists and Viet Cong, but also any citizen that the government wanted to break and make disappear: writers, student protestors, Buddhists, people who refused to salute the flag. Mercifully, the prisons were finally closed in 1975, ending a horrifying chapter in history where more than 20,000 people died. Now it lies in eerie silence, amongst encroaching trees and creepers, another witness to the cruelty of humankind.

Phu Tuong Prison is one of the most prominent sites. 120 chambers and an additional 60 without a roof.  Skeletal mannequins in several of the cages add a bone chilling realism to the experience.

On a lighter note, fried slipper lobster was a superb, culinary treat. An hour’s flight over the vast delta of the mighty Mekong River with its eternal rice paddies took us back to Ho Chi Minh City.

By bus on to Mui Ne up the coast, famed for its beautiful beaches and mysterious, cascading sand dunes that rise high and plunge into the sea. After days of lazing in the lap of luxury by the sea, we caught a train to Danang on the central coast. I found myself lying on an uppermost berth with the carriage roof just a few inches above my nose. Danang is a sprawling city that straddles the Han River which was a natural barrier between North and South Vietnam. Quiet by day, the river front bursts into light and gaudy resplendence by night. One evening, a river boat capsized, people drowned and the very next day, Vietnam’s prime minister made it compulsory for all children to learn swimming.

A short trip to Hoi An followed. Once a major port, Hoi An is known for its well-preserved Ancient Town, cut through with canals and the melting-pot history is reflected in its architecture, a mix of eras and styles from wooden Chinese shop houses and temples to colourful French colonial buildings, ornate Vietnamese tube houses and an iconic Japanese covered bridge with its pagoda.

Phong Nha-Ke Bang National Park spread over 126,000 hectares is Vietnam’s largest National Park and is adjacent to another 80,000 hectares of protected land in neighbouring Laos. It protects 104 km of caves, underground rivers (with more yet to be discovered) and is a UNESCO World Heritage recognised site, both for its exceptional cave system and biodiversity. Home to the world’s largest cave, Hang Son Doong.

A honey gatherer stumbled upon it in 1990 and couldn’t fix the location.  Lost in time, some 18 years later a British spelunking team found it again.  For now, Soon Dong is highly regulated and expensive to explore. Sudden rain causes inundation of these cave systems.  Good timing on our side, we were on a trek to Hang En, the third largest cave in the world, through true, unspoiled jungle.  Lean, fit porters carried our supplies.  Crossing many gurgling streams through ever changing landscape, fraught with leeches we saw the maw… a great black hole in the distance. We entered through an underground river opening, with torches and other safety gear.  Hang En is a voluminous cave that can house a 60 stories New York City block in its main cavern. Prodigious Bats and Swiftlets (their spittled nests make a highly sought after bird’s nest soup) circling high above, we had a refreshing swim in the cave river.  After a few rounds of ‘happy water’ (local homemade rice wine) to help ensure a sound night’s sleep and a
hearty meal, we slept in tents. Overnighting was a dark, novel experience. The Doline we first thought was the entrance, burst into a waterfall of light in the morning.

GETTING THERE: Dong Hoi is the nearest city and the main transport hub. Reach it by overnight train or a short flight from Hanoi or Ho Chi Minh City. From Dong Hoi take a 45-minute taxi to Phong Nha, the base for caving trips.

EXPLORING CAVES: There is a lot to be explored from Dong Hoi to Hanoi, the capital. Plenty to enjoy, ranging from mouthwatering street food to traditional entertainment, plus the fascinating history and culture of a city that has survived colonial occupation and war with its spirit intact. We stayed in the Old Quarter, the buzzing heart of Hanoi for more than a thousand years, situated at the north end of Hoan Kiem Lake and still a hub of everyday life for locals.

An overnight train from Hanoi took us to Lao Cai Railway station, the gateway to Sapa.  The ride onwards is an hour of beautiful views a thousand metres up into the mountains. It is a charming town and the surrounding region is host to many hill tribes, stepped rice terraces, lush vegetation, and Fansipan, the highest peak in Vietnam.  We took a long trek along old buffalo (Yako) tracks, got eye-catching views of the terraced rice fields, encountered friendly ethnic minorities in scattered villages, and learned more about a lifestyle that the everyday stress of modern life has yet to touch.

Back to Hanoi by train, a quick shower in a hotel anteroom, delicious morning pho on the sidewalk and we were good to go on…

Ha Long Bay (another UNESCO heritage site) located in North East Vietnam, features thousands of limestone ‘Karsts’ in all shapes and sizes rising spectacularly from the water.  Topped with lush vegetation, many of these natural citadels are hollow with enormous caves.  Some, even have lakes or hidden openings.

We cruised around for two nights, stopped at Cat Ba Island, swimming and kayaking along the way in and around the limestone karsts, whenever we could.

Vietnamese are proud, industrious and resilient, yet gentle people who stood up to ancient Chinese marauders, French colonialism, then the communist equation.  Today’s generation holds no past grudge, looking firmly ahead to prosperity, assimilation and peace in this ever changing world.

As the late Anthony Bourdain stated, “If I’m an advocate for anything, it is to move… As far as you can, as much as you can.”