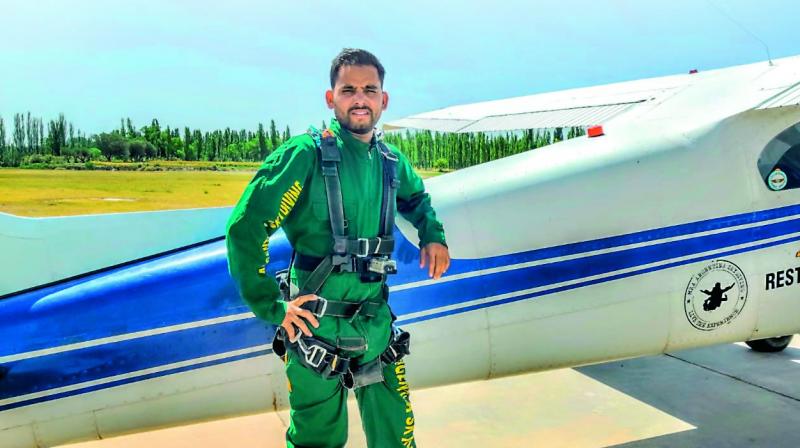 Amgoth Tukaram in his skydiving avatar.

How many of us have celebrated Republic Day atop the highest mountain peak of any continent? Amgoth Tukaram (22), Telangana’s young mountaineering sensation, has done not only that, he’s done it three times in the past year.

On January 26, he scaled Mt. Aconcagua and hoisted the Tricolour and sang the national anthem on the summit in spine-chilling cold.

“I’m glad things turned out as planned,” says Tukaram, a native of a little hamlet called Tekulapally in Ranga Reddy district of Telangana.

“It was a moment of gratification, joy and pride.”

The expedition was a challenging one. Mt. Aconcagua is a tough summit due to its rocky topography. Also, there are landslides. Despite the odds — inclement weather, incessant rain, rockfalls — he summited in 15 days.

Tukaram’s ambition is to scale the seven highest mountains in seven continents.

Soon after the Aconcagua expedition, he had the opportunity to try his hand at another adventure sport, skydiving, in Mendoza, Argentina. “I was exhausted after Aconcagua but then I know skydiving is a rare opportunity; so I gave it a shot. It was an amazing experience,” says the proud mountaineer.

Tukaram says every expedition of his had a social message he wanted to convey. “My trip to Mt. Aconcagua was against global warming. Mt Kilimanjaro, Mt Elbrus and Mt Everest were about creating awareness about the environment, human trafficking, and women safety, respectively,” says Tukaram took a BA degree in political science from Noble Degree and PG College in Hyderabad.

Tukaram says he’s realised that scaling a mountain peak has its own challenges of getting acclimatised to the harsh weather conditions.

“On the way to Mt Everest I narrowly escaped death because of a huge traffic jam atop the mountain. And then I suffered from dehydration on Mt Elbrus. But these instances only made me tougher,” he said.

Tukaram says it is a mix of ambition and patriotism that drive him. “Passion is the key to your pursuit. If you are not passionate about what you do, you cannot set high standards,” he says.