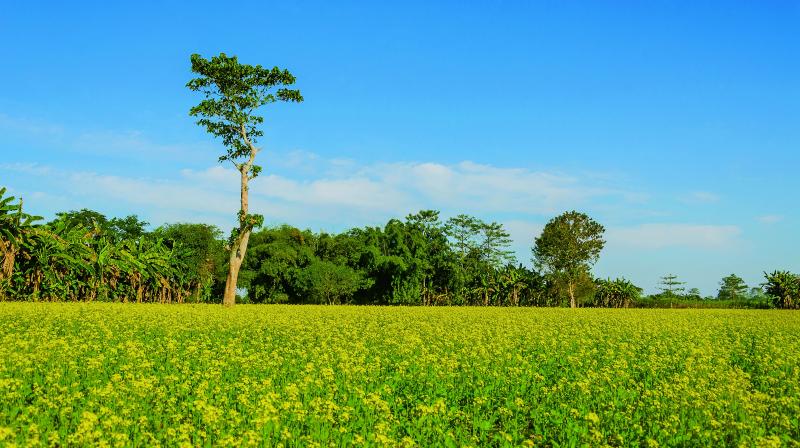 Majuli in Assam has many claims to fame. It is the world’s largest riverine island. It was here that the ‘Forest Man of India’, Jadav Payeng, created a forest over many years by planting one tree at a time. But there is more to Majuli than what hits the headlines.

Surrounded by the swift-flowing waters of the Brahmaputra, this island is a receptacle of Vaishnavaite traditions. 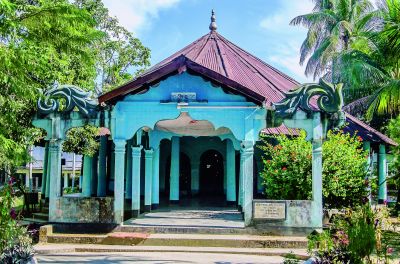 There are 22 active satras operating out of the riverine island. The satras consist of a large prayer hall facing a simple shrine, surrounded by dormitories and bathing tanks for monks.

Sometime in the 16th Century, Mahapurusha Srimanta Sankaradeva, a Vaishnavite mystic, visited Majuli, or Dhuwahat as it was known during the time of the Ahom rulers.

It is believed that it was here that he met his disciple and successor Madhavdeva. In Majuli, he planted the seeds of the revival of Vaishnavite traditions that were losing ground in other parts of the country.

Srimanta Sankaradeva planted a Bilva tree, (Aegle marmelos) also known as Bael Patra, and laid the foundation of the first Satra. The term is derived from Sanskrit word Sattra, meaning a session or assembly of devotees. 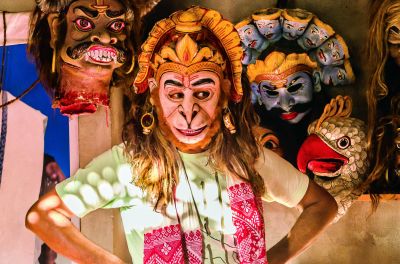 Satra is famous worldwide for it's Mask-making tradition

For the first 100 years or so, the satras faced persecution and the earliest of them were burnt down by the Ahom kings who were swayed by conspiracy theories. But later kings took a more benign view towards them.

Over time, many new satras were established in Majuli and other parts of Assam. Today, there are 22 active satras operating out of the riverine island. While all of them are repositories of Vaishnavaite traditions, each have something unique too. Among the common factors is the tradition of monks.

Senior monks take young children joining the satras under their wings, and play the role of father, mother and teacher. The young monks are treated as members of a family and contribute to household chores while learning the practices unique to the satra.

All the satras have a main prayer hall called Namghar - the place where you recite the name of Govinda one of the thousands of names of God. At one end of the Namghar is a temple to Govinda. 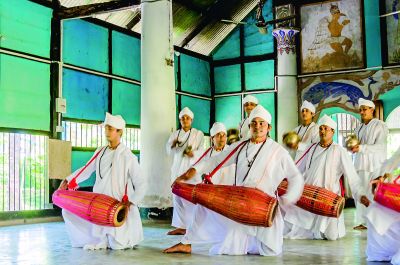 One of the main satras in Majuli is the Kamalabari Satra established by Padma Ata (1595-1625). It is a spiritual centre for Vaishnavities, and keeps alive the music, dance and art traditions of the sect.

Monks regularly come to sit quietly in the Namghar and read from ancient scriptures or sing prayers in chorus.

One of the main satras in Majuli is the Kamalabari Satra established by Padma Ata (1595-1625). It is a spiritual centre for Vaishnavities, and keeps alive the music, dance and art traditions of the sect. The monks learn music and dance as part of Bhakti or prayer, and sing and dance in the praise of Govinda, reciting stories from his life.

It is indeed remarkable that these traditions have not only survived over centuries but have flourished and are now recognized and respected the world over. Some of the monks we met during our visit have performed in USA and Europe, besides many parts of India.

Their dance performances are carefully choreographed and traditional instruments like the Mridongo, Nagara, Dhol (different kinds of drums) and Bihutal and Bhortal (metal instruments) are used. 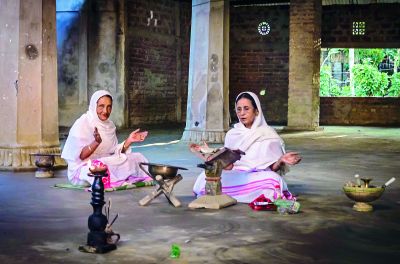 Monks regularly come to sit quietly in the Namghar and read from ancient scriptures or sing prayers in chorus.

While in most of the satras the monks are celibate and do not marry, the Shamaguri Satra, best known for its mask-making tradition, is an exception. Its members follow Grihastha dharma they marry and continue to carry on their traditions.

Talking of masks, they play an important role in the dance dramas based on mythology. Our soft-spoken host, the famous artist Hema Chandra Goswami, donned a mask of an evil character, and immediately his body language and voice changed, sending chills down our spine and giving us a first-hand experience of the effect of these props.

These satras in Majuli are not just centres for Vaishnavaite traditions, they are an important aspect of Assamese culture and a great example of how tourism can help revive dying art forms and help in the sustainable growth of local communities.