It’s the Holy Grail of Football, and countries are kick-off ready for the FIFA World Cup 2018. Decode the game with this ready reckoner. 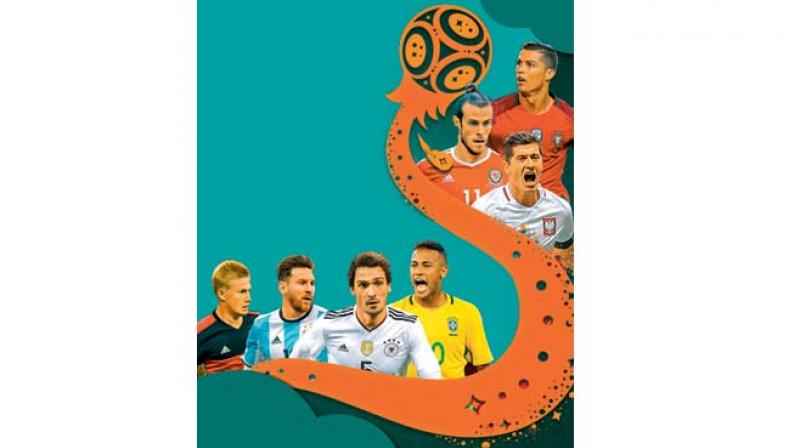 As the 21st edition of the quadrennial event gets underway in Russia on June 14, Iceland and Panama will make their debuts.

One part the legend of the Cup is an odyssey; eulogising the tale of demigods such as Pele, Maradona and Zidane. And on the other hand, it’s a tragedy of Shakespearean proportions, remembering fallen heroes and lost battles and of a campaign stained by the blood of Colombian defender Andres Escobar, murdered for scoring an own goal.

In essence, the World Cup is the ultimate prize in football. It is no less the holiest of grails in the world of sport, validated by the fact that since 1930 when the first Fifa World Cup was hosted by Uruguay only eight nations have managed to win it while 69 others that earned the right to stake a claim have failed trying. As the 21st edition of the quadrennial event gets underway in Russia on June 14, Iceland and Panama will make their debuts. The Nordic island nation, with less than one-fourth the population of Agra, is the smallest country to ever seal a World Cup berth. We profile the best of sides from the eight groups, chosen on the basis of their recent history, rankings and in some cases, legacy.

Here are the best sides from the eight groups. From their road to the World cup to their playmakers, these are the hopefuls.

Group A
Uruguay
On top of being the inaugural champions, who also secured the title in 1950, Uruguay is the best ranked team in the group. The South Americans have a proven history in the competition with five semifinal appearances to boast of, the most recent in 2010.

In Oscar Tabarez they have an iconic coach who professes an attacking brand of football. The philosophy was on display as the La Celeste qualified as the second best team from South America behind Brazil. Paris Saint-Germain striker Edinson Cavani had led the scoring charts with 10 goals. 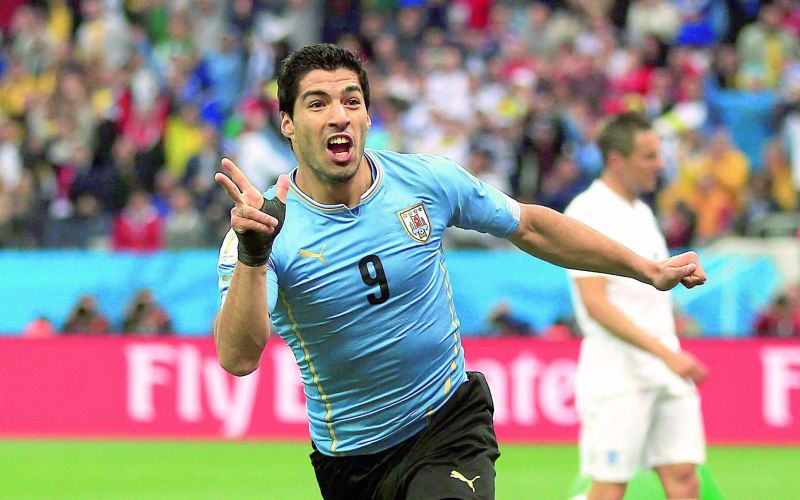 The star attraction however would be FC Barcelona ace Luis Suarez. The enigmatic striker who netted five times in the qualifiers is also Uruguay’s all-time leading goal scorer and is expected to form a lethal partnership with Cavani.

The unfancied group is surprisingly tight as besides hosts Russia that will be raring to make an impact on home soil there are Asian giants Saudi Arabia set for a fourth World Cup appearance and Egypt, powered by the sensational Mohamed Salah. Saudi's Mohammad Al-Sahlawi is a star who could set the stage alight as he holds the distinction of being the joint-top scorer in qualification with 16 goals.
Others in the group: Russia, Saudi Arabia, Egypt

Group B
Spain, Portugal
Be assured of fireworks as this group is stacked with superstars. Spain, world beaters in 2010 and Portugal, the reigning European champions make a fine cocktail of footballing splendour; their meeting in Sochi on June 15 is potentially the biggest showdown in the group stages. 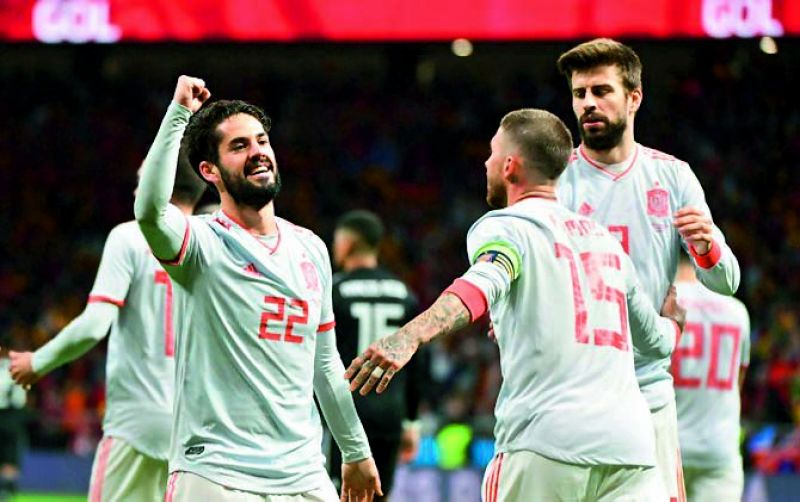 Spain is brimming with talent. Andres Iniesta, Sergio Ramos and David de Gea to name a few, make the European giants one of the tournament favourites. Their coach Julen Lopetegui is a master tactician under whom the La Roja had an unbeaten qualification. Spain’s 6-1 annihilation of Argentina in a March friendly is sure to warn their opponents. But for all their might the Spanish armada would meet an equal adversary in neighbours Portugal that possess one outstanding warrior in Cristiano Ronaldo, one of the greatest footballers of all-time. While the Best Fifa Men's Player for last two years running is the fulcrum of the side coached by Fernando Santos they are not a one-man team. The quality to do without their talisman, if need arises, was on show two years ago when Portugal recovered from losing Ronaldo to an injury in the 25th minute, to beat France 1-0 for their maiden Euro title.
Others in the group: Morocco and Iran

Group C
France
The fact that a host of stars including Karim Benzema, Alexandre Lacazette and Anthony Martial was deemed surplus to requirements by French coach Didier Deschamps for their World Cup campaign is a telling testimony of Les Bleus’ strength. Compared to other big hitters the French had a modest qualification, scoring just 18 times in 10 matches but their potential to raise the game at the right time puts them in the front row of the title race.

The French have an unbelievable number of superstars namely Antoine Griezmann, Kylian Mbappe, Paul Pogba, N’Golo Kante and Raphael Varane. Didier Deschamps who marshalled the French midfield alongside Zinedine Zidane in their World Cup winning campaign in 1998 is hoping to be only the second person after West Germany’s Franz Beckenbauer to win titles both as captain and coach. 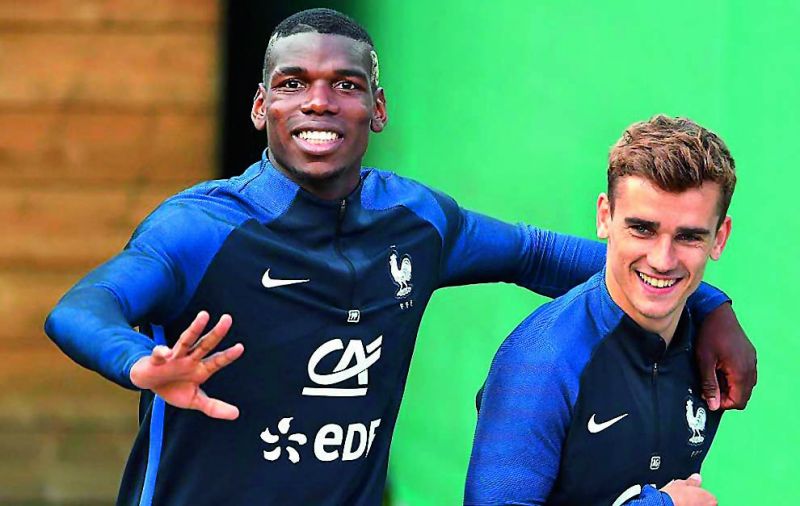 Denmark, Australia and Peru complete the group and France would need to quickly go up the gears to progress. Socceroos legend Tim Cahill is on the verge of entering an elite club that has Uwe Seeler, Pele and Miroslav Klose, should he score a goal. The three World Cup icons had scored goals in four different editions of the event.
Others in the group: Australia, Peru and Denmark

Group D
Argentina
With Argentina, Croatia, Nigeria and Iceland, Group-D is more or less the group-of-death and predicting the two that could progress out of this Colosseum is impossible. On paper though, two-time winners Argentina are the favourites and it is more so due to their living legend Lionel Messi. The diminutive magician is capable of deciding the outcome of a game on his own, just as he did on the crucial final round of South American qualifiers with a spectacular hat-trick against Ecuador that sealed Jorge Sampaoli’s men a place in the World Cup. However, La Albiceleste that reached a fifth World Cup final four years ago are struggling to strike a balance and would face a stern test of character in the group stage. On their day, the Croatians can be tantalisingly brilliant. In Luka Modric, Ivan Rakitic and Mateo Kovacic the Europeans have one of the best midfield triumvirate at the World Cup. Iceland's qualification came as a surprise and they famously beat the Croats once in qualifiers and African powerhouse Nigeria can cause an upset.
Others in the group: Iceland, Croatia and Nigeria 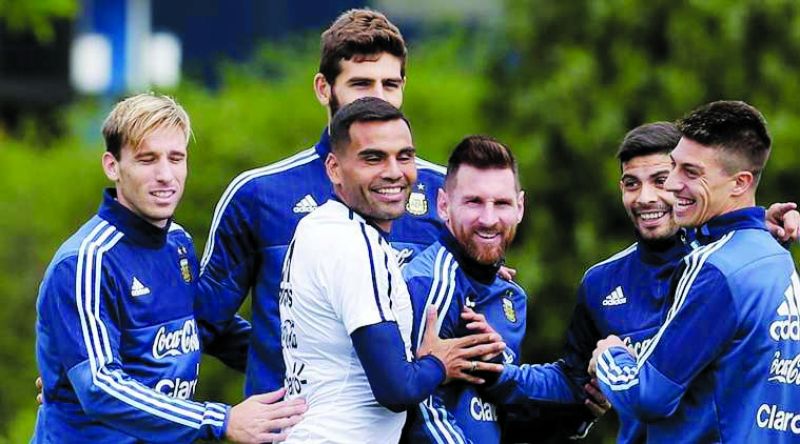 Group E
Brazil
The crushing imagery of Brazil fans after their 7-1 humbling at the hands of champions to be Germany in the 2014 World Cup semifinals is vivid even to this day. A tumultuous period of calm preceded, and salvation came in the form of former Corinthians coach Tite, who took over mid-2016. Since then the Canaries have discovered their magic and by becoming the first team to qualify for the World Cup, Brazil have once again projected themselves as favourites.

The world’s most expensive footballer Neymar is their beacon of hope and the five-time champions are confident that their best player, who is recovering from a serious injury, will hit top form when it matters. 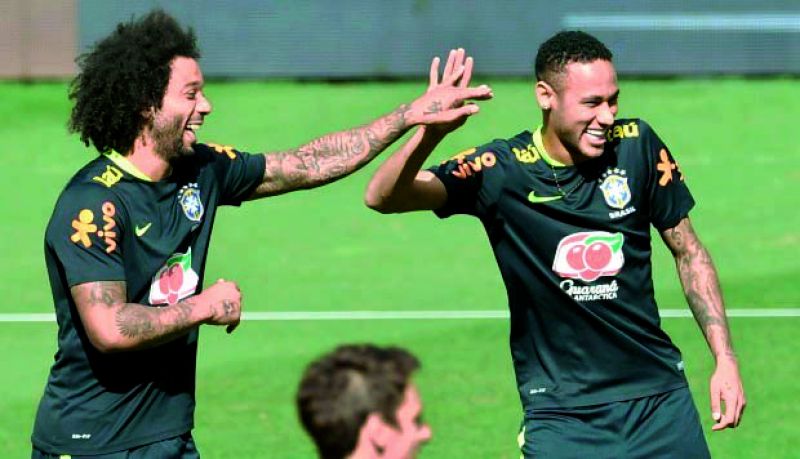 Just like the Spaniards and Germans and the French, the Brazilian camp is a confluence of stars — Gabriel Jesus, Philippe Coutinho, Roberto Firmino and Marcelo are all aces in the pack. Topping the group would be the priority for the nation that is the only one to have featured in every World Cup. With Brazil staying relentless in their pursuit of a sixth title, the competition for the second place between Serbia, Switzerland and Costa Rica would be intense.
Others in the group: Switzerland, Costa Rica and Serbia

Group F
Germany
Imagine this, Mario Gotze, the player who scored the winning goal in the 2014 final and Andre Schurrle, one that assisted the golden strike, will not be part of the German side in Russia. At 25 and 27 years respectively they are not old enough to be disregarded, so the only reason for their omission was unsatisfactory performances at the club level the past few seasons. But do not be mistaken, the absence of Gotze and Schurrle has not diminished the four-time winners’ firepower a hoot. In Toni Kroos they have a champion central midfielder and with the likes of Mesut Ozil, Marco Reus, Thomas Muller, Mats Hummels and Mario Gomez in the fray Germany mean business. The Die Mannschaft will be hoping to equal Brazil’s record of defending a world cup title and being a joint best five-time winners. Joachim Low’s only concern should be getting his world-class goalkeeper Manuel Neuer fully fit. Like in Brazil’s group there will be feisty battles for the second place between Mexico, Sweden and Korea Republic.
Others in the group: Mexico, Sweden and Korea 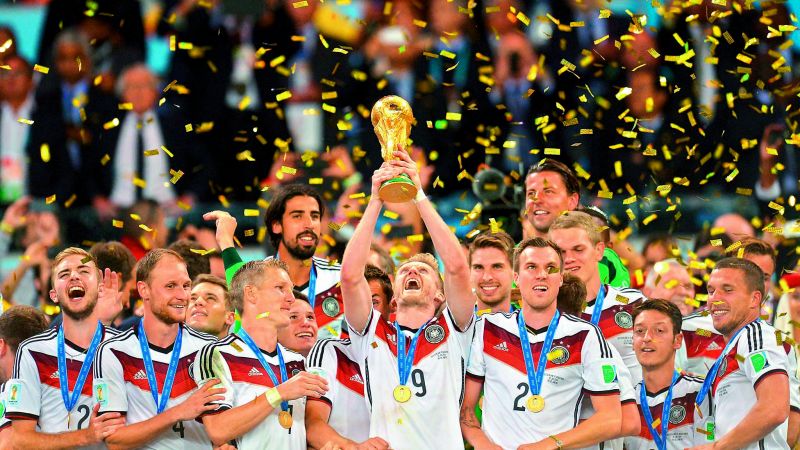 Group G
Belgium, England
If World Cup teams were rock bands Belgium would be Metallica. The Red Devils’ golden generation is a force to be reckoned with. Despite being perennial underachievers at the biggest stage of football the third-ranked side in the world have all the necessary ingredients to challenge for the coveted title. Chelsea man Eden Hazard, a skilful and nimble-footed genius, is the diamond in the Belgian crest. But there are gems strewn across the pitch for Roberto Martinez and one precious commodity in particular is the visionary Kevin De Bruyne, a playmaker par excellence, one that would enrich any team in the world. Striker Romelu Lukaku and goalkeeper Thibaut Courtois are other exceptional players with the Europeans who would be pushing for a memorable campaign. Their previous best achievement at a world cup was a fourth place in 1986. Also in the group is England, the perennial bridesmaids of world football. The 1966 champions last reached a semifinals in 1990 but they are still regarded as a top side prior to every campaign. That is partly because of the quality in their ranks; in Harry Kane the Three Lions have a lethal frontman. Only a miracle will allow Tunisia and/or Panama to progress out from this group as the two European heavyweights are primed to make it out alive.
Others in the group: Panama, Tunisia 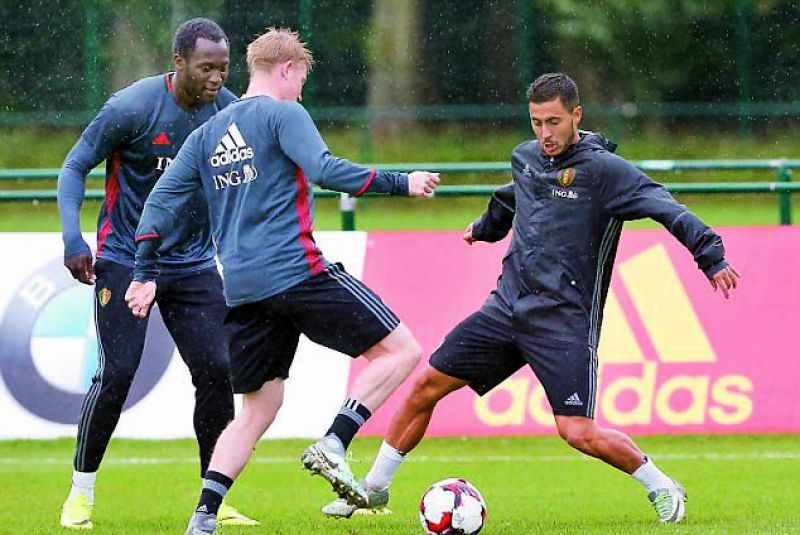 Group H
Poland
Poland failed to qualify for the last two World Cups but in the past few years, the east Europeans have grown from strength to strength and are currently ranked 10th in the world. In Robert Lewandowski, the Poles have a prolific centre-forward, who notched up an incredible 42 goals in all competitions this season. The Bayern Munich striker netted 16 off his country’s 28 goals in qualification, becoming the world leading joint-top scorer in the process. The group is loaded with Colombia, Senegal and Asian warriors Japan. The 2014 Golden Boot winner James Rodriguez, Juan Cuadrado and striker Radamel Falcao make Colombia an exciting proposition. The 2002 world cup giant killers Senegal, with Africa’s most potent winger Sadio Mane, are capable of causing upsets and Japan can certainly put a smile on the fans’ faces.
Others in the group: Colombia, Senegal and Japan 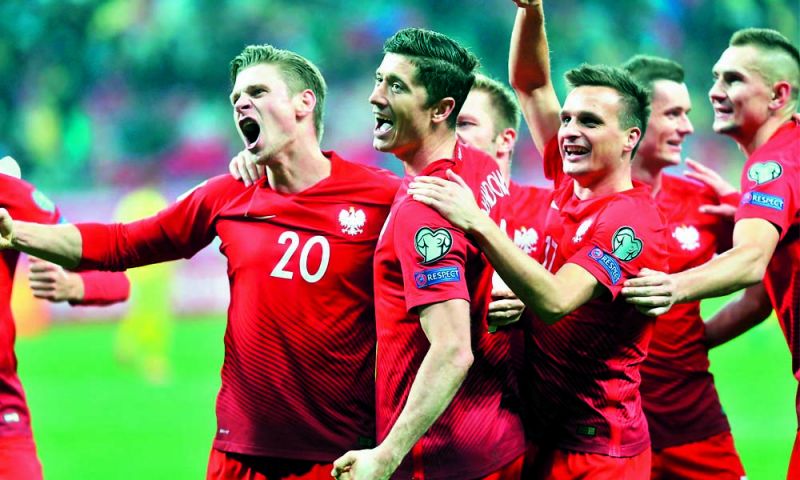