For the last 20 years, a 41-year old security guard has been writing letters to the families of martyred soldiers to share their grief 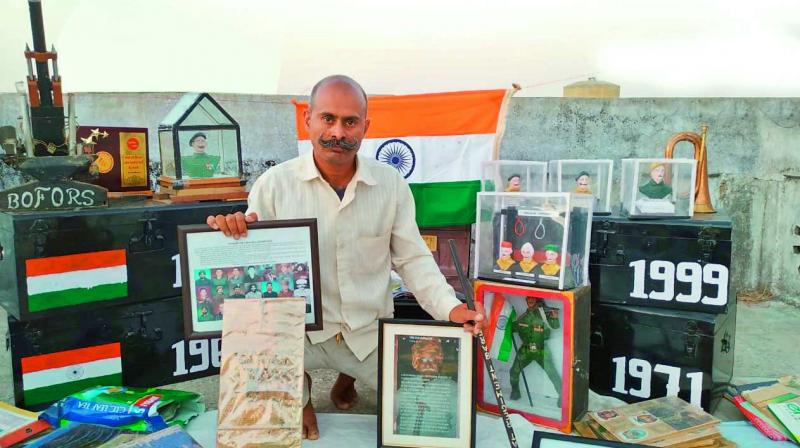 In 1999, the Kargil War between India and Pakistan sent a wave of patriotism across the nation.

The war changed the course of the nation and with that, it changed the life of now 41-year-old security guard Jitendra Singh Gurjar, who  like many other young men wanted to join the Indian Army and serve the nation.

Unfortunately, he was rejected due to a medical condition and was forced to helplessly watch the consequences of the conflict.

But his patriotic spirit persevered and pushed him to reach out to the families of those martyred and for the last 20 years, Gurjar has been writing letters to such families, his recent being the families of 20 soldiers killed during the China-India clash in the Galwan Valley.

“The entire nation was talking about the Kargil war. People in my village used to walk miles and go to pay tribute to the martyrs. About 50 people would stand in a circle while one person would read the newspaper,” recalls Singh, adding that every day, there was a casualty from his village and around. “When the truck of the Indian Army would come into the village with the dead bodies of the soldiers, people would sing slogans for those who died on the line of duty,” he says.

The news of jawans getting martyred is short-lived for most people, but not for Singh. At the age of 19 when the war was well underway, Singh would collect newspapers from the railway tracks he had no money to buy them to gather the data about all the jawans.

After this, he would send letters to their families and acknowledge their sacrifice. He recalls the words of one of the martyr’s fathers, who said, “So what if my son died, my country is alive,” which filled him with patriotism.

Since the Kargil War, Singh has written over 4,500 letters to the families of martyrs, expressing his gratitude for their service. His heart-warming letters come with a sketch of a small flag of India and usually end with a self-composed poem celebrating the deceased soldier.

“They treat me like their son. They respond to my letters and call me to meet them. If I can’t be a soldier, at least I can be someone to pay tribute to the ones who gave up their life for the nation,” he says.

A security guard for over 17 years, Singh had changed seven uniforms and two cycles to commute from his one-room rented house in Surat to his place of work. When he started writing letters, a postcard would cost him 15 paise and would use flour glue to stick the newspaper cuttings that he would collect from the railway tracks onto his letters.

“At present, one letter costs me `9 and 50 paise. I used to do two shifts as a guard so would spend one salary on my family expenses and with one salary I would buy postcards and stationery to keep the data and write letters,” he says.

Singh’s decision to write letters has taken away everything from him his health, family and youth but not his determination. With a salary of ` 10,400, he faces financial constraints as well as the responsibility of a school-going son with whom he does not share a strong emotional bond.

This comes alongside his deteriorating eyesight, a result of writing in dimly lit places, but it has not once deterred him from buying postcards and writing to the families.

“I buy postcards every month. A few years ago, when the government increased the price of the postcard, I wrote many letters to the then Prime Minister but no one responded. Although the prices came down to 50 paise,” Singh recalls, further sharing that even the lockdown and pandemic has not stopped him from keeping in touch with those soldiers’ families via phone calls.

Growing up in Bharatpur, Singh was surrounded by various families that had generations of soldiers who sacrificed their lives at the frontlines of war. He now takes great pride in writing letters and organising Kargil Vijay Diwas in his village, which he has been doing since 2000.

“Initially, no one turned up, but later, when people became aware, they started coming and named that place Kargil Chowk. They now call me Major Sahab,” gushes the civilian soldier. However, the government remains ignorant of his efforts.

“Emotions have no role to play in power. I sometimes think that despite my work, I still don’t have a permanent security guard’s job so I can earn a bit more and buy more postcards,” he rues.

Talking about his future ambitions, Singh says that he wants to build a martyrs’ museum in his village for the next generation to remember their sacrifices. When asked about his moments of joy, he recalls his visit to the martyrs’ families and travelling by plane.

“The airline staff made an announcement about my work and people clapped for me. The pilot called me the nation’s pride; I was in tears. This was the best moment of my life,” Singh smiles, adding that one time, 500 students helped him with 11,000 postcards after seeing him writing letters while working at an IT institute. “The post office didn’t have that many postcards, they printed them on request and sent them to me,” he laughs.