Chopra’s in the ‘Pink’ of health

In a freewheeling chat, Priyanka Chopra talks about her love for taking risks, her struggle to make it big in Hollywood, and her key to marital bliss. 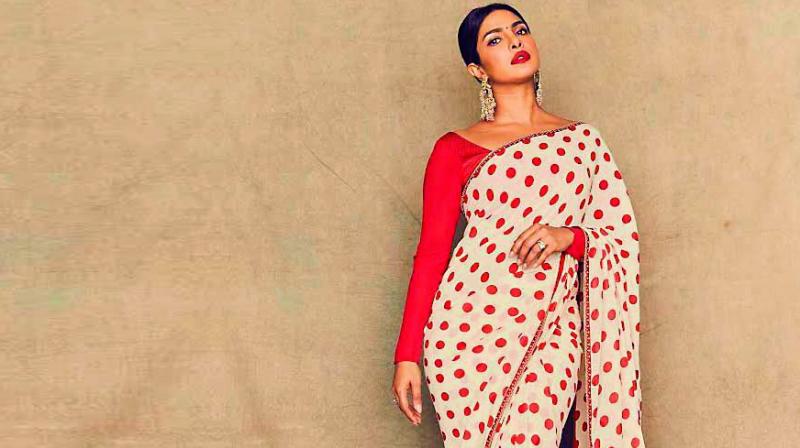 Our stars move in strange ways. And Priyanka Chopra-Jonas is no exception. Despite a hectic work schedule and a social calendar which is chockablock with glitzy parties and red carpet galas, Ms Chopra-Jonas manages to spend downtime with her folks in Juhu and go house-hunting with hubby Nick in Los Angeles. Little did mummy Dr Madhu Chopra know that her daughter would someday capture the hearts of millions in India and America. Chopra took the world by storm when she was crowned Miss World 2000. Cut to circa 2019, Priyanka is one of the few Indian actors, who has carved a niche in Bollywood and Hollywood. Not to forget her fiery activism as UNICEF’s Goodwill Ambassador for Child Rights and her big fat wedding to pop icon Nick Jonas. Although she is drowned with commitments, Priyanka’s love for honest storytelling has brought her back to the subcontinent in Shonali Bose’s The Sky Is Pink. Playing mother to a terminally sick daughter in the movie, Priyanka is doing what she does best – taking risks, defying norms and enjoying the best of both the worlds.

Not many commercial actors are comfortable playing a mother to a teenager. What made you pick this role?
I disagree. If anybody looks at my career they would know what I mean. I played a mother when I was in my early twenties in Pyaar Impossible. So, I am not the kind of actor who is afraid of playing different characters. I don’t play myself. I play characters and that’s an integral part of who I am in my daily life. It doesn’t matter what age I am playing. That’s not my concern at all. I look for challenges.

You are perhaps the only mainstream actress from Bollywood who has made it big in the West as well. What has been your approach to work in Hollywood?
When I went to America, I was a big star in India. But going to a new country, introducing yourself and asking for work is a huge struggle. You need humility and I am not scared of humility. You can’t have ego and pride. If I need something, I will ask for it. However, if you let ego come in the way then you will not survive. People feel Bollywood actors can only do dancing and melodramatic scenes. It was difficult to break that stereotype. I went for lots of auditions but I was never scared of them.

Actors are constantly judged for the kind of roles they play. Are you also conscious about picking the right scripts?
In entertainment, a lot of things come from fiction. Everything will not necessarily have a good message. Art is art. It is important to tell stories. That’s the beauty of living in a democracy where you can have an opinion and create whatever you want. Yes, it’s great when movies come out with a message, but I don’t think that should be the only responsibility of entertainment. When it comes to the backlash, I think criticism is subjective.

Your co-star in the movie, Zaira Wasim quit the film industry at a very young age. Do you think the younger generation has clarity about what they want to do in life?
I admire Zaira for knowing herself. As individuals, we need to know what our priorities are. She is an incredible actor. The kind of work she has done will be remembered in the Hindi cinema industry for a long time. I wish her all the best. I think it’s extremely admirable for someone to make up their mind. I think young kids today, especially teenagers, are so well informed that they mature at a very young age. They know what they want.

You have also produced The Sky Is Pink. How calculative are you with your films?
I don’t think of box office when I decide to do a film. I only think about the story. As an actor, I believe in taking risks because I feel you will never evolve if you don’t take risks. I believe in doing content-heavy films, and then every film has its own destiny.

You are a role model to many outsiders in the industry. What has been your formula for success?
The one really important thing is to not think anything as a ‘do or die situation’. There is so much criticism on social media and people take it so seriously. Only listen to the criticism of people who matter to you and not of people who you don’t even know you. The only pressures that you should take are the pressures that you put on yourself and not by society.

What’s the kind of support Nick offers as a husband? What’s your mantra for a happy married life?
Nick is an extremely supportive husband. When I was shooting for The Sky Is Pink, I was shooting till the last few days before my wedding. I was committed to this film till January and I had met Nick in June. My commitment to the film was first and Nick understood that. So we came down to India only about 20 days before our wedding to handle the logistics and make the final guests list. I feel Nick understands my passion and he supports it. We both know that our work is important to both of us. I think it is very important to have an honest sense of communication in a relationship. One should share his / her feelings instead of keeping it to yourself. Transparency is important in a relationship.