A ‘Twinkle’ in her thoughts

Tina’s novel traverses effortlessly from UP to Mumbai to Kerala to MP like a well-planned road trip. 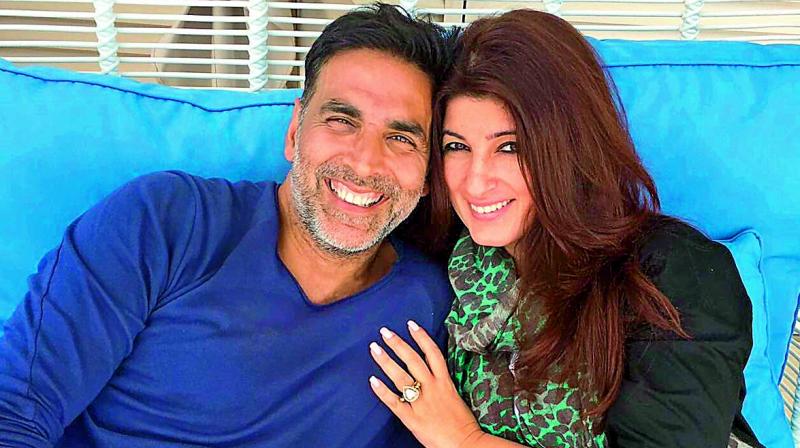 There is something about Tina Khanna. She is as uncomplicated as her writing. There is an instant emotional connect with her stories, because behind those endearing sentiments, often couched in witty words, lies the heart of a sensitive writer. There is no attempt to impress and Tina’s voice is as friendly as your next-door neighbour. She is better known as Twinkle or Mrs Funnybones (her best selling debut novel), that seriously gave many intellectually arrogant authors several sleepless nights. Nor is there any kind of smugness, despite the success she has achieved as an author. There is a child-like delight when you tell her that you enjoyed her book “It’s good to know. It’s reassuring,” she laughs heartily. “I’m relieved. You are the first person outside in the universe who has read it,” she adds making you feel somewhat privileged with this confession.

The Legend of Lakshmi Prasad is Tina’s second book, a sweet-sour collection of heartwarming stories that make you laugh heartily or sigh with sadness depending on which page you are on. The writing is simple, lucid and evocative. Most new age authors, brimming with overconfidence, tend to showcase their extensive vocabulary. Tina is a rare but wonderful exception.

“I’ve read books where you feel the author has followed a Thesaurus. If you want to make a point, and know what you want to say, don’t complicate with words. I want people from different backgrounds to read and enjoy my book. I wrote in a language that we all speak and just made it a little more complicated than that,” she responds.

The book gets its title from the first story, a feel-good read as it provides a quirky take on a village celebrating the birth of a girl child. Even in post modern India, this may not quite be the reality that pervades our lives but it’s a wonderful concept that needs to be applauded.  Ask her if her birth as the first born was celebrated with as much joy and she retorts, “I don’t think such issues mattered to my family. We live in different circumstances. My mother never brought up mine or my sister’s birth or my father felt any different. But I must add that even in similar circumstances like us, the birth of a male child, especially if the first child is a girl, is important. So we can’t really say it doesn’t exist in our world.”

Tina had a privileged upbringing as the daughter of India’s biggest superstar, the late Rajesh Khanna and his equally talented wife, Dimple Kapadia, And as a much welcome first born in her home, she has not been privy to the desi melodrama that surrounds the birth of a son. In fact when Tina got pregnant, she prayed for a daughter. “We were two sisters and I was looking forward to having a daughter. In fact we had a bet as to what I would have, I wanted a daughter. I lost the bet 14 years back when my son was born. I think it was a motorcycle helmet,” she pauses briefly trying to recollect old memories.

In The Legend of Lakshmi Prasad, the birth of a girl child is met with acute disappointment. But Tina’s own joy knew no bounds when her four-year-old daughter Nitaara was born. “I was overjoyed as there had been a long gap between the two, this was an unexpected bonus and it has been wonderful and she has been wonderful. She is a lot like me, you see yourself through someone else, the only way of being immortal.”

That’s why it was imperative for a character in the novel to bring about a social change in that fictious village: “Each time a daughter is born, we will celebrate and plant ten jardalu trees for her and they will belong to her forever. Ten trees like the ten fingers with which we women can hold our own destinies firmly in our hands.”

However the planting of trees is not just a symbolic gesture in the novel, meant to make many a female reader misty-eyed. In reality, Tina works with a group called Rastaa Chaap and they get together to paint dead trees. “We also planted 320 trees before the monsoons. It may not be a large number but we are a small group of 15 ladies. Maybe that’s why there is a tree in every story that plays a pivotal role,” reveals the author.

From spearheading a movement to celebrating the birth of a girl child, Tina moves on to the middle-aged world of Noni and her sister Bini, the protagonists of her second story (Salaam Noni Apa),  that make you laugh hysterically at their antics. This gentle narrative of two sisters seeking solace in each other’s company in the winter of their lives finds resonance in Tina’s own happy world. “I love this story most. I have been trying to write since 18 and I kept failing, This is my third attempt at writing this story.  The sisters are hysterical. I laughed while writing it.”

Besides the obvious humour, what comes through is an almost organic understanding of the Aga Khani culture. And here comes the revelation. Her nani was Aga Khani and in her acknowledgments, Tina has thanked her nani for dragging her to jamatkhaanas in her childhood. “Isn’t that a blessing of growing in a multicultural upbringing, you get to see so much, where you get exposed to so much, I was blessed that way, forget everything else, what about the great food like khichda which takes a day to prepare. I don’t get it anywhere else. I was blessed in that way,” she reveals and hopes to end up growing old with her sister Rinke, like the two protagonists in the novel.

“I’m very close to my sister and see this happening eventually. Women tend to outlive men and are left pretty much alone. My only wish though is I hope she is the fat one and I am the thin one,” she says a tad mischievously.

Tina’s novel traverses effortlessly from UP to Mumbai to Kerala to MP like a well-planned road trip. It offers a fun roller coaster ride replete with quirky moments. Tina travelled to Kerala, where she spent two weeks alone, grappling with the local culture and thus was born the likable but nutty Eliza Thomas who marries impulsively and drives her family up the wall. “I have met several fiercely ambitious women, who are doing so well but are completely hopeless when it comes to relationships.”

And just as it appeared like her book was done, she chanced upon this true story of Murugappa in a newspaper. Determined to make him a part of her fictitious world, Tina chased the man for three months before they finally met in London first and then Coimbatore. Thus was born The Sanitary Man from a Sacred Land — a tribute to Padma Shri Arunachalam Muruganantham or Muruga as Tina calls him, because like she cheekily puts it, “my tongue rips over his name”.

The stories may talk about hidden conflict, hasty decisions and bitterness in marital bonds but Tina strongly favours the institution of marriage. “I would totally advocate marriage. It is nice to have a partner, especially the right partner, who is supportive of everything you do. It is about being each other’s cheerleaders. It is nice to have someone waving the pom-pom for you.”

That’s why in her characteristic witty style, Tina has dedicated this book to her husband Akshay Kumar: Each time there is a power cut, you, my friend, always have a flashlight handy.

“Akshay is my cheerleader. I have narrated every story to him and he is a patient listener. He gets very excited and is my strongest supporter.” The couple, who has been married for 15 years, shares a very normal marriage. “He is normal, I am normal. A lot of people get lost in this world of spotlight. I grew up in it so it’s not heady. Akshay grew up in a grounded family, his sister is grounded. His mom, who is a lot like me, is decisive and independent. That’s why his feet are firmly planted on the ground. Also, as a couple we don’t encourage sycophants around us,” she reveals.

This just reiterates the first line of this story. She is a simple lady unaffected by the trappings of fame. And that’s what makes her characters believable because like Tina, they are unpretentious and humane.