Ayutthaya’s crumbling temples are reminders of the grandeur of old Siam. 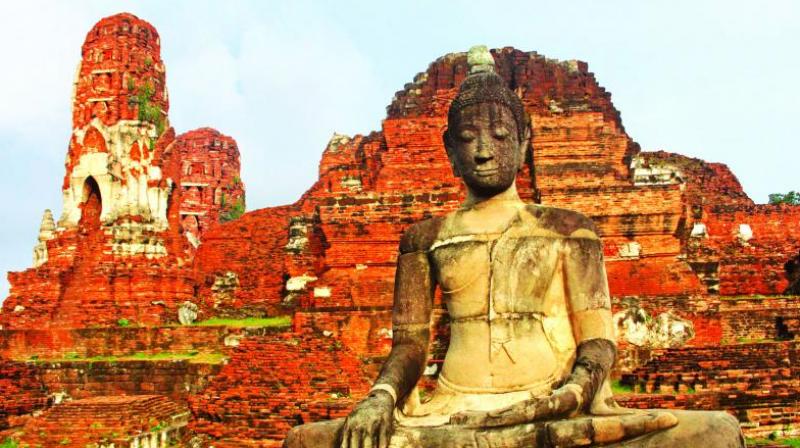 It was decided much before our Thailand trip — we will keep one day for Ayutthaya, charmed by the photos on the internet. Not exactly a picture of mountains and trees and cascading waterfalls. This one charmed with its past, with the mostly-red pictures of its ruins. The large and broken structures had obvious long stories that we thought we could discover. You don’t really need to be a history buff to enjoy Ayutthaya, but if you are, you will love it even as you hear about it from men and women who once went there. And that’s what you do when you are in a foreign country, you listen to these tales and let yourself be lured by the experts who saw it all. 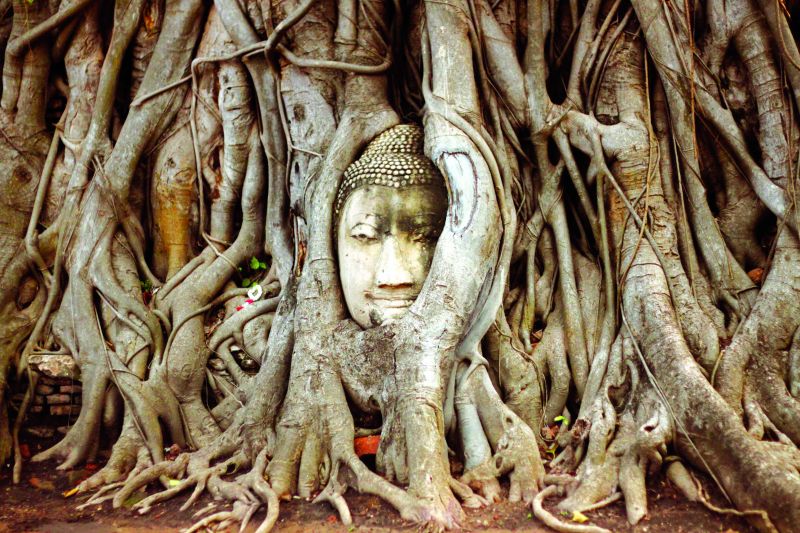 Buddha in the roots at Wat Mahathat.

Travelling with us from Bangkok railway station — Hua Lamphong — to Ayutthaya was a Bhutanese man who had been there many times, and Irena from Germany, who was going there for the first time. One of the many joys of a train ride is meeting people, just as clueless as we are, and occasionally, a veteran traveller. At the station, we let ourselves be canvassed by agents of tuk-tuk drivers. After a lot of bargaining an agent agreed to take us around for 700 Baht. Our driver was a man in a hurry. He took us to the first stop and then handed us over to another tuk-tuk driver, a middle-aged, patient man who let us hang around each of the stops for as long as we liked. He’d ask us to try and return by a certain hour but we mostly failed to. It was a question of more places in less time or more time in fewer places. Since we kept getting lost in the beautiful ruins, especially being photography enthusiasts, we chose three spots to spend the day — Wat Yai Chaimongkhon, Wat Phrasisanphet and Wat Mahathat. These are sites of the Ayutthaya Historical Park that cover the ruins. There is much more of the city of Ayutthaya, which had once been the capital of Thailand. 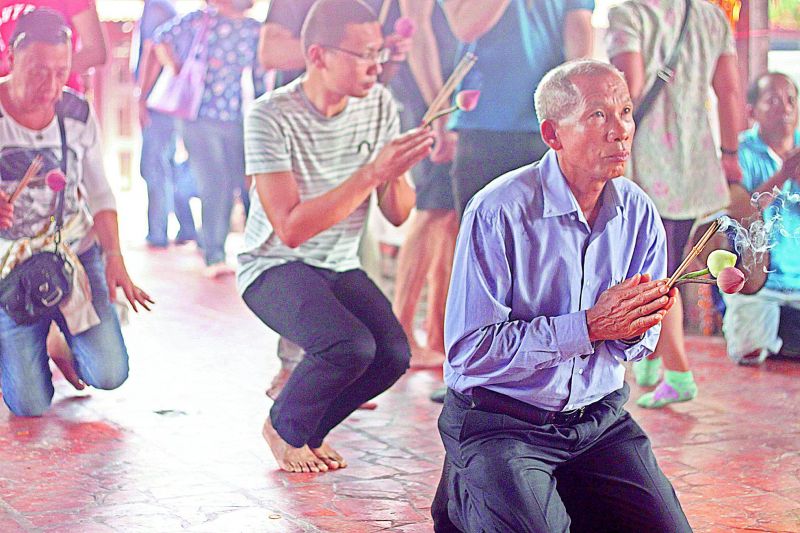 The name intrigues. Ayutthaya sounds suspiciously similar to Ayodhya, India’s darling city where Lord Rama is believed to have been born. In the walls of Wat Phra Kaew, a Buddhist Temple in Bangkok, you find mural paintings on 178 panels depicting the story of Phra Rama of Thailand’s national epic Ramakien, the Thai version of Ramayana. The connection comes again in Ayutthaya, the ruins of which are full of broken Buddha statues. It is believed to have come through trade, when Hindu merchants from India brought Ramayana to Thailand. But it didn’t thrive and gave way to Buddhism. Even so, Ramakien is still recognised as a national epic. 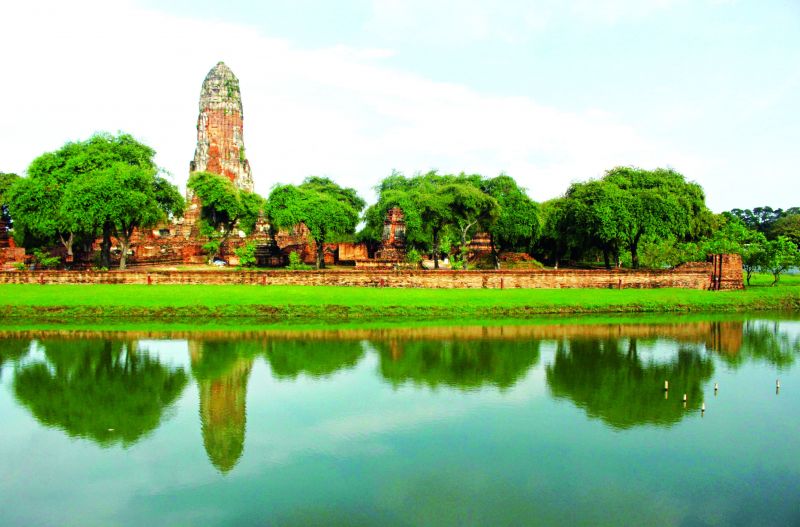 The ruins of Wat Phra Ram.

A lot of it got ruined along with the lovely and large Buddhist statues of Ayutthaya with the Burmese attack of the 18th century. Burma captured the city in 1569 and destroyed it in 1767. Two centuries later, Ayutthaya has turned into a city with a glorious past that travellers come to. The biggest challenge when you travel around Thailand is language. Few people speak English and asking directions or guidance can be a problem. The names of places too don’t come easily to a foreigner’s tongue, so they don’t get what you are looking for. You will have to rely on the descriptions written on the outside of sites or else join a guide’s group, which can take the fun out of exploration. 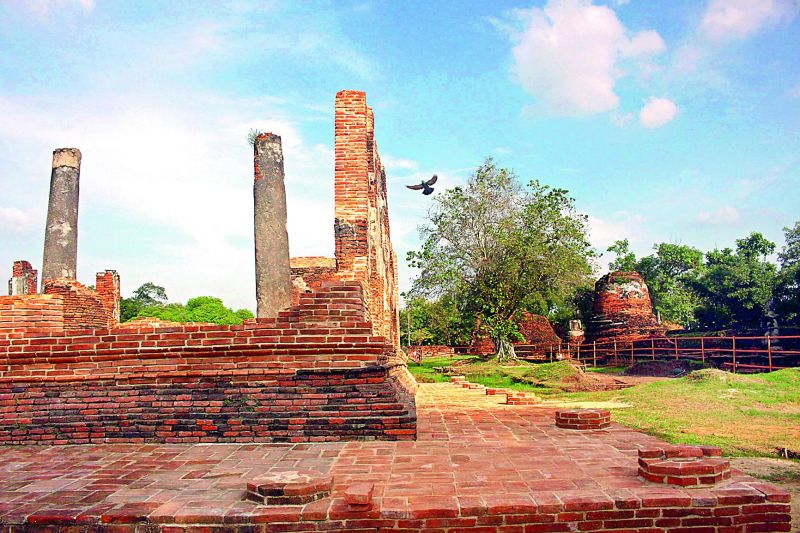 The ruins of Wat Phra Sisanphet

So (from the written descriptions) we learnt that Wat Yai Chaimongkhon is a monastery, which was built by King U — Thong in 1900 BE “to accommodate monks who were ordained from Phra Wanratana Mahathera Burean in Ceylon”. Inside is a large golden Buddha, worshipped by devotees on knees, reminding one of church prayers. Quite a few Buddha statues are to be found here, in varying sizes.  But it doesn’t have the ruins that Wat Phrasisanphet has. We reached there after a quick lunch. It was situated on the premises of the royal palace during the reign of King U — Thong again. In 1448, the site was donated for the construction of a temple. Three stupas contain the ashes of three kings — Boroma-Tri-Loka-Nat, Boroma-Rachathirat III, and Ramathibodi II. 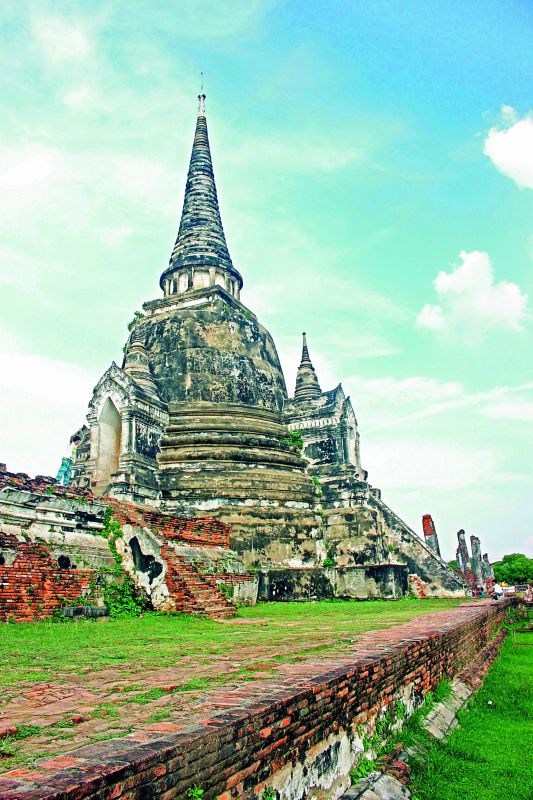 The ruins of Wat Phra Sisanphet

The site is full of red structures — small and big — in differing stages of ruin. Some of the Buddhas are without heads, some have lost a limb or more. Steps to the top of towering structures lead to mysterious-looking open places, but no rooms, no insides.  Outside the site is another smaller structure to quickly catch a glimpse of, because by then our patient tuk-tuk man was beginning to lose his cool. The number of hours and places he agreed to take us to had to be fulfilled and the train back to Bangkok could not be missed. So there was a run-to-and-run-out-of stop to have a view of the Wat Phra Ram, a monastery at the cremation site of the first Ayutthayan monarch, Ramathibodi I. This view by the water is easily a photographer’s delight. 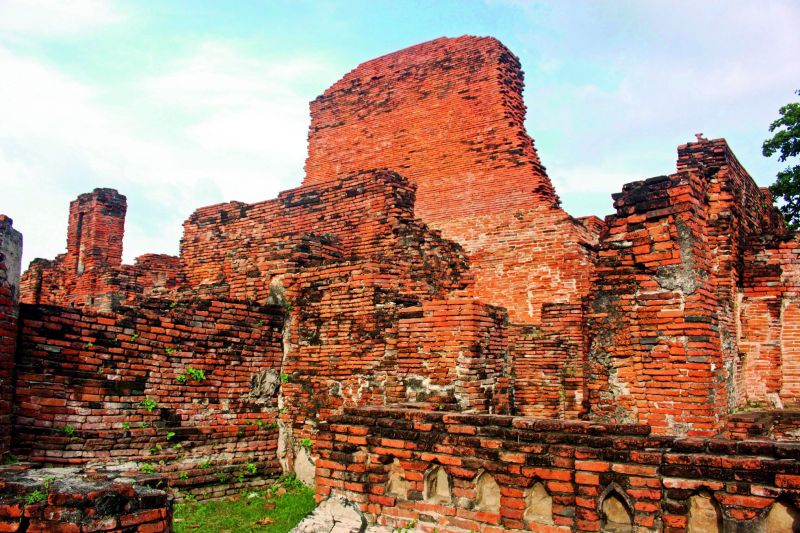 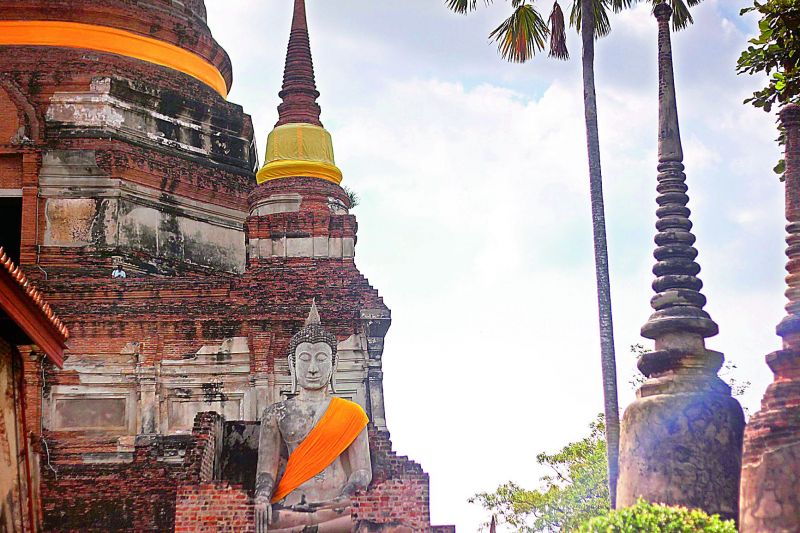 Visitors keep taking pictures standing next to this grand structure, whose roots grow into the ruined walls behind it. There is more inside, a gigantic Buddha — unbroken — at the centre of it all. Perhaps even the attackers could not entirely wipe these structures out. You’d like to imagine they wanted something left, to tell the old tales to faraway travellers.