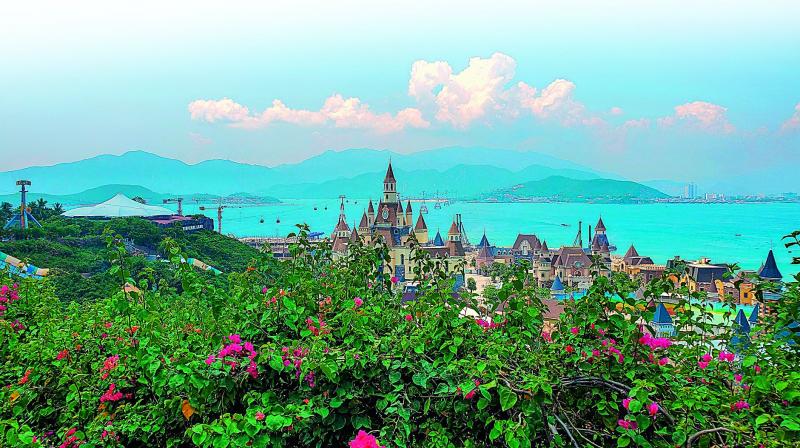 At the crack of dawn, the seaside town of Nha Trang, in the eastern coast of Vietnam, is already bustling. A group of women, assembled on the beach, perform synchronised workouts to upbeat tunes while elderly onlookers, seated nearby, watch the proceedings with interest. This morning ritual is a noisy affair and faint strains drift up to the veranda of our sea-facing suite.

As the sun begins to rise higher, fishing boats bobbing on the rocky sea are back with the day’s catch and morning walkers, who appear like moving dots in a matrix from our elevated sea-facing suite, make themselves scarce as tourists begin splaying out at various spots on the beach to soak up the sun. 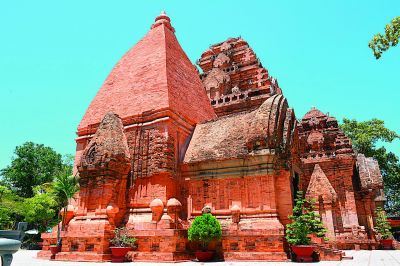 Our first stop is the Hon Chong promontory that has a panoramic view of the mountainous coastline and nearby islands. After a short ride, we find ourselves descending a flight of stairs to reach the cape. We pass the ‘Heaven’s Gate’ — a rock that hangs precariously between two larger stones, and walk towards the towering Hon Chong at the far end of the promontory.

he eponymous stone, a massive formation that leaves us spellbound has a local legend attached to it. Apparently, an inebriated giant was pushed off the cliff by fairies who would bathe in the waters near Hon Chong. To memorialise this story, there’s a massive gouge in the rock that resembles a handprint. We take a breather at the adjoining Bai Duong Beach—less popular and populated than the main beach — with clear waters gushing over powder white sands. 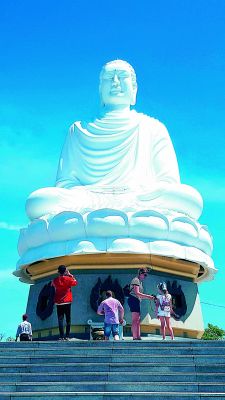 Post the sightseeing, we decide to explore the city’s cultural history and book a local taxi — 20 dollars for a few hours. First stop — Po Nagar Cham Towers. Erected between the 7th and 12th century, the temple complex has been used as a place of worship for Cham, Chinese and Vietnamese Buddhists and also has Hindu influences. One of the towers, for instance, has a linga inside the main chamber, while another houses an idol of Lord Shiva with his consort. Being much higher than sea level, this peaceful spot looks down onto the busy beach town of Nha Trang and the fishing trawlers crowding Cai River estuary. Local legend has it that the river’s Xom Bong Bridge survived WWII bombings due to the temple’s spiritual protection. Our taxi next stops at Long Son Pagoda which houses an awe-inspiring 24-metre-tall statue of Buddha seated on a lotus throne. The 150-steps hike and the blistering heat has us beat and we retreat to our hotel bar for some R&R.

As the sun disappears from the horizon, we decide to explore the city’s landmark sights on foot. The closest attraction from our hotel is the Tram Huong Tower known locally as ‘Lotus Tower’. This building serves as a great reference point between walking and strolling along the beach and helps us identify the street intersection that our hotel is on. Our leisurely walk sparkles up an appetite. Luckily, just a few 100 metres away, on Nha Trang beach, we find enterprising fisher women busily attending to their stoves, grilling everything from clams to lobsters—right on the footpath. We sample a plate of juicy lobster, chopped into bite-sized portions and transferred to a thermocol container with a lid. Slow roasted on grill over a mild flame, the minimalist preparation is completed with a squeeze of lemon as a final garnish. But while the shell has been cracked open from a side, one requires to scoop out the meat using disposable cutlery provided by our vendor. Needless to say, this wasn’t the most convenient meal of the day. But once we manage to excavate the succulent chunks of meat glued to the cavernous flaming orange shell, life doesn’t seem so bad after all.