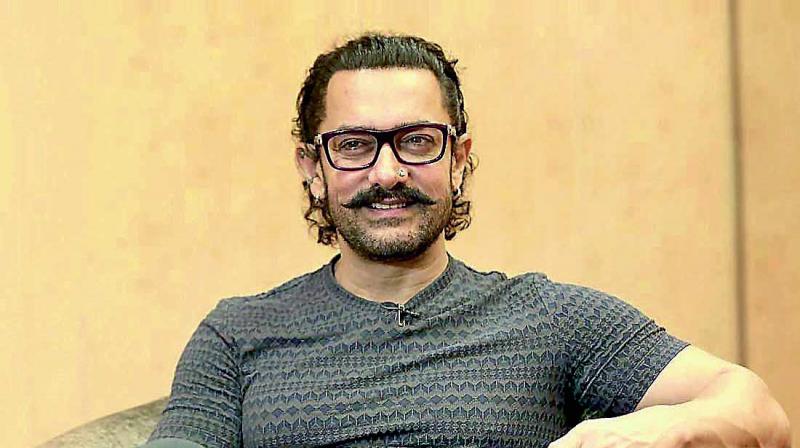 What they did not know was that there is a long list of film personalities who had opted for the surrogacy route already. Amir Khan (in picture), Shah Rukh Khan, Sohail Khan, Karan Johar, Tusshar Kapoor, Priyanka Chopra, Preity Zinta, Shilpa Shetty and Sunny Leone are some of them in India while even the Kardashian sisters had done it abroad. — DC File Image

Ever since Vignesh Shivan, husband of well-known Tamil actress Nayanthara, made it known to the world on October 9 that the couple had been blessed with twins, both boys, and published a photograph, too many people have been worked up in too many ways that they are saying too many things without even ascertaining if they know what they are talking about.

Even mainstream media embroiled itself in what is now being projected as a ‘controversy’ though I would blame social media for all the nonsensical exchanges over what should have been dismissed as a private moment of celebration for the couple. Perhaps Shivan started it all by choosing social media to make the personal announcement and the first set of naysayers came on board, questioning the possibility of a woman being delivered of a child or two within four months of marriage. The star couple had been in the news all along and their wedding at a luxury resort in June was common knowledge.

Those doubters, who had racked their brains on reproductive science without taking into account the fact that the couple had been dating for about seven years before marriage, triggered the first wave of discussions on social media and some television channels. Some grown up adult discussants had to be told that one need not be married at all to have a child. Till then it was okay because what followed was the discovery that the couple had engaged a surrogate mother, from which exploded some sparkling nuggets of information, knowledge and ideas. One of the most mind boggling things was that Nayanthara had done a ‘revolution’ by not taxing herself with the task of undergoing the pregnancy.

The ‘revolutionary idea’ of not using her own womb was even attributed to what Periyar E V Ramasamy had told women in general to not being a child producing machine and also suggesting that they cut off the uterus. Those who gave the ‘revolutionary’ title to the actress – of course in social media – were her ardent fans who were jumping in joy not because she had become a mother but had not tampered with her body.

None of those quoting Periyar, know that the founder of the Dravidian movement had only asked women, which means all women, to shun motherhood if possible and not advised a rich and privileged woman to use another woman’s uterus to bear her child. But they went gaga over their screen idol – the female superstar of Tamil cinema – having been so smart and intelligent to harness the fruits of scientific innovations.

What they did not know was that there is a long list of film personalities who had opted for the surrogacy route already. Amir Khan, Shah Rukh Khan, Sohail Khan, Karan Johar, Tusshar Kapoor, Priyanka Chopra, Preity Zinta, Shilpa Shetty and Sunny Leone are some of them in India while even the Kardashian sisters had done it abroad. So what is there to rave about Nayan, as she is fondly called by the fans?

It was then some naysayers came down like a ton of bricks, citing the law. Well, a celebrity couple violating rules is indeed a juicy subject for discussion in television studios, newspaper articles and of course social media. So, apart from trolls and memes, serious discussions ensued on social media platforms on the legitimacy of what Nayan and Shivan did.

Legal experts and surrogacy specialists jumped into the fray with their views and it was revealed that surrogacy as such has been banned in the State, though it once had localities in Chennai that were called colonies of surrogate mothers. Poor women in need of money did rent their wombs for couples who could not bear children due to medical complications.

Then it became a sort of industry involving middle men, hospitals, doctors and others exploiting the deprivation of women for huge profits. It was then new laws were brought in following complaints and it is for the authorities to find if Nayan and Shivan have broken any of those laws. But the self-styled consciousness keepers of society started referring to the laws and found that one of them stipulated that the surrogate mother should be a relative of the biological parents and started harping on it.

So some social media channels went in search of the surrogate mother and found her to be a relative of Nayan in Kerala.

Ahead of that, other media channels found women who had been surrogate mothers at the time when it was a flourishing medical business and interviewed them to bring out the poignancy in their stories, highlighting on facts like the surrogate mother being not allowed to see the face of the child once or feeding it after delivery. Amidst all this cacophony, someone said that it was the daughter of a famous actor of yesteryear who started it all. True, she, as a gynecologist, was the pioneer in in-vitro fertilization and had helped hundreds of childless couples have children but why drag her name into it now?

That is social media, about which Italian philosopher and writer Umberto Eco said: ‘Social media gives legions of idiots the right to speak when they once spoke at a bar after a glass of wine without harming the community. Then they were quickly silenced but now they have the same right to speak as a Nobel Prize winner. It’s the invasion of idiots.’