The 52-year-old actor does not want to be boxed in a particular genre of movies, Akshay is keen to do different kinda roles. 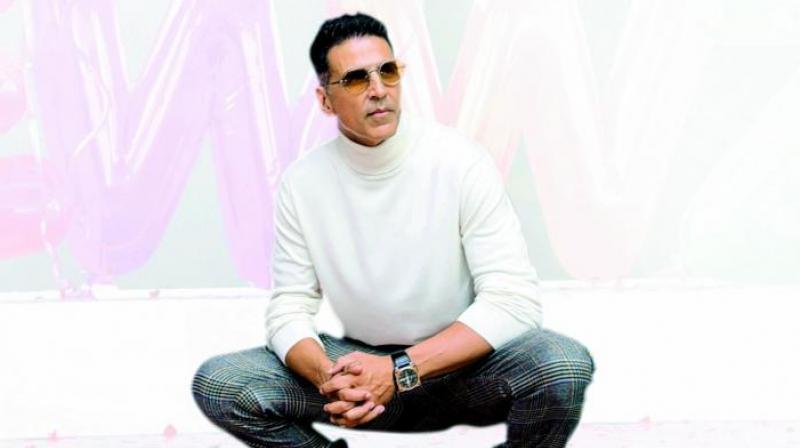 From standing on top of a flying plane to jumping into a hot air balloon, from wooing leading ladies on the silver screen to appealing men to buy sanitary pads for their wives, Akshay Kumar has always proved his mettle and versatility. Be it action, comedy or movies with a social message, the macho khiladi pulls it all with ease and élan. The 52-year-old actor is now gearing up for a comic ride with Kareena Kapoor Khan in Good Newzz.

Your movie Good Newzz speaks about IVF, how sensitively have you guys dealt with this subject?
We were very careful since it is a serious subject, but the movie has a lot of comedy in it as well. It is an important subject, especially for families who cannot have children. Since IVF’s discovery, eight million babies have come via IVF. It has saved many lives. Even now people use the term ‘baanjh’. You will get the message once you watch the film.

You have been doing different kind of movies, is it a conscious effort to not get slotted in a particular genre?
If I say I am comfortable with one genre you will put a tag on me. I don’t want any kind of a tag. Earlier, I was only doing action movies and I was bored of it. I never wanted the action hero tag. Even now, I don’t want any tag. I am comfortable playing all kind of roles.

You are the only superstar who has worked with anumber of new directors.
The truth is when ‘big people’ don’t take you one has to start his/her own journey. You cannot just sit at home thinking, you have to start working. Raj (director of Good Newzz) is my 21st new director. I feel the greed for good work is a lot more in newcomers. It’s a do-or-die situation for the new directors because they have to prove themselves.

Do you think big directors didn’t come to you and went to the Khans ?
I don’t know where they went but they didn’t come to me. I can only tell you that they went to the people who deserved it. It is not only the Khans, we also have the Kapoors and other actors. So people who deserved got it. I still don’t have big directors. Please ask Adi Chopra and Karan Johar about this.

Comedy has different layers how do you see the line between brainless and sensible comedies?
There are different layers of comedy like there is Mr Bean – solo expression, Charlie Chaplin – physical, situational and slapstick. I am very happy that I got a chance to do different kind of comedies. I got to do slapstick comedy with Houseful. People may call it ‘senseless’ but there is an audience for it. To make people laugh at your own expense is the hardest thing but unfortunately people don’t give credit. At the award nights they don’t give credit to it. If somebody has done a good role in comedy then give them the best actor award. It is true, actors who do comedy are not taken seriously in this industry.

You will be romancing Manushi Chillar (21) in Prithviraj Chauhan. The age difference is huge, why don’t we see vice-versa?
When I came in the industry and I acted with Sridevi, Madhuri and Rekha. I have already done it. You should ask people who have not done it.

You have worked with Kareena before, what are your memories with her?
I still remember when I was working with her sister Karisma, Kareena was still a kid. I use to play with her on the sets.

Many films have been bashed for showing stories that inspire the youth the wrong way or the way Bollywood treats women… what’s your take on it?
People should treat movies as mere movies. If a person is playing a negative character that doesn’t mean he is trying to teach you something bad. I am an actor and it’s just a character. If you have a problem, don’t watch the movie. The way you have freedom of speech and expression, actors also have the freedom to act. Also, the Censor which passes the movie is a government body. Some movies will have a social message, while some will be just entertainment.