The Secrets of Sri Lanka!

The evening sun setting was enhanced by our visit to the stunning Ruwanwelisaya stupa, which is known to contain the oldest relics of the Buddha in. 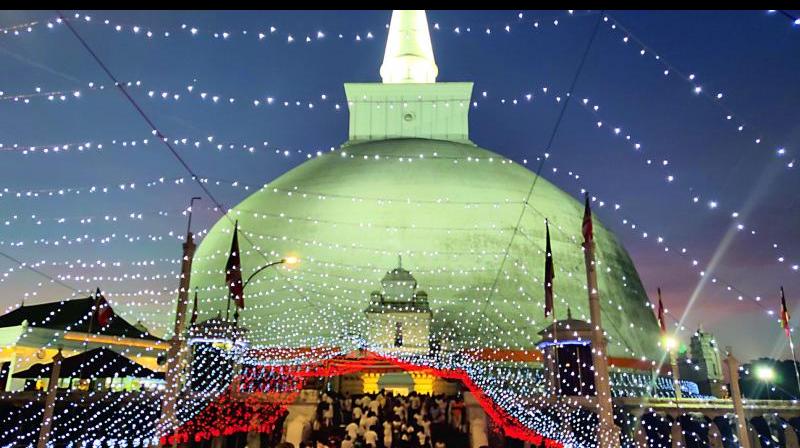 We ended New Year this year with a calm discovery of Sri Lanka’s Cultural Triangle, so called as it is concentrated with many Buddhist temples, sculptures, ancient monasteries and stupas that date back to over 2000 years. The area also covers some of the UNESCO World Heritage Sites including the ancient cities of Anuradhapura, Polonnaruwa, Sigiriya, Dambulla and Kandy. There are a number of monolithic rock formations that have been ideally transformed into places of worship.

The eight of us from my family decided to stay in a resort in Habarana, situated in the centre of the triangle, and take day trips to both Anuradhapura and Sigriya over the New Year. So accompanied by our cheerful local driver Wasantha we drove from Colombo for five hours to reach Habarana with Wasantha’s non-stop chatter of Sri Lanka stories enroute.

The erstwhile ancient capital of Sri Lanka,  Anuradhapura was an amazing historical revelation with the oldest monastery and also a portion of the Bodhi Tree, where Buddha got enlightenment, in Gaya Replanted there . The evening sun setting was enhanced by our visit to the stunning Ruwanwelisaya stupa, known to contain the oldest relics of the Buddha in it. Lit up with tons of candles and decorated by flowers, this stupa is one of the most sacred shrines of Buddhists the world over, they say.

When talking about this area of Sri Lanka its imperative to mention that the food in this region is delicious beyond comparison with the rest of this island country. We indulged in copious amounts of seafood including oysters and shrimps with Egg Hoppers (a typical Sri Lankan accompaniment made with toddy and rice topped with egg) made by local women employed by the resort at breakfast and dinner everyday.

The accompaniments of Seeni Sambal (dried Chilli with dried fish), Pol Sombala (coconut shredded with chilli, salt and onions) added that extra zing to all our meals. The Sri Lankan staples of rice and curry with egg kottu (shredded Sri Lankan parathas with eggs and vegetables and chillies) were an all-time favourite with all of us at every meal.  All this food was accompanied every evening by a Sri Lankan live band singing old and new tunes, which was the piece de resistance.

Considering these large meals daily that we indulged in over five days there, three of us my sister, hubby and me kicked off the new year with a hike to the famed Sigiriya Monolith Rock which is 1200-ft above sea level .

Also called Lion Rock, Sigiriya is a natural yet massive column of rock which is close to 200-metre in height. The site chosen by King Kasyapa now consists of the remains of his palace on the top of the rock while halfway up the rock is the gateway to higher ground through a structure depicting an enormous lion.

A UNESCO World Heritage Site, Sigiriya is considered to be one of the best preserved examples for ancient urban planning and is well known for its frescoes, the mirror wall, the gardens and its overall magnificence.

We hiked up the rock and walked down in just 1 hour 10 minutes, which came as a surprise to us as it was a steep climb nearly hallway up towards the end. Even Wasantha our driver was quite impressed by our quick timing.

I saw a part of Sri Lanka very different from its beaches, parties and city life. The Cultural Triangle of Sri Lanka makes one discover their strengths, and unfurl the journey path that will lead one to discover life’s truths and true potential’ Just like we felt climbing the Sigiriya Rock during our holiday.