My kids will be my kids, says Sanjay Dutt

Excerpts from a chat where Sanjay opens up about love for the women in his life, playing age-appropriate roles, the Dutt biopic, and more. 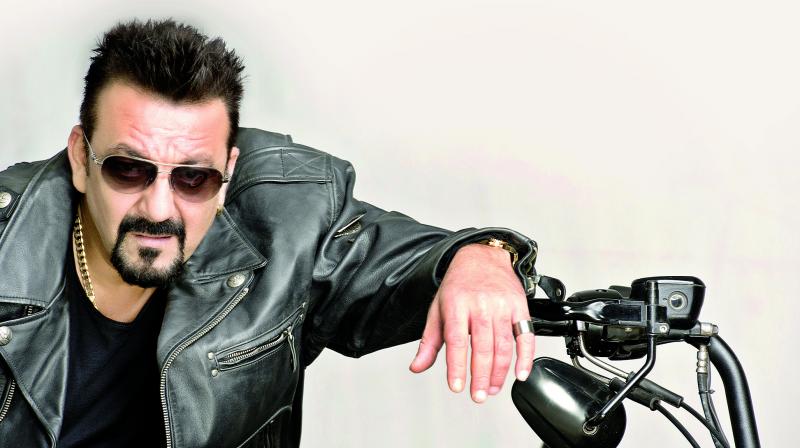 While he has quite the towering personality, Sanjay Dutt takes on a rather gentle tone when he talks. And that’s quite in stark contrast to the role of an aggrieved father he plays in his next, Bhoomi, rushes from which show him performing action-packed scenes in the drama. Baba — as he’s fondly called — sits down to talk about his role, softening up as he talks about his own daughters, Trishala and Iqra. Excerpts from a chat where Sanjay opens up about love for the women in his life, playing age-appropriate roles, the Dutt biopic, and more:

Bhoomi is your comeback movie. How has it been to come back on the sets and pick up from where you left off?
I can’t say Bhoomi is my comeback movie. But yes, it has been a couple of years and it was great to be back on the sets. The first day of shooting was very emotional for me. Just being with the lights and the cameras was great. It was beautiful. And those 50 days we shot for in Agra, they were beautiful. Yes, of course, it was very emotional for me to go back on the sets once again.

Dealing with sexual assault and setting things right, Bhoomi is being compared to recent movies like Mom and Maatr. Except this time the person setting things right is the father. Do these comparisons hold weight?
The topic is the same, yes. But the treatment is not similar. Like you rightly mention, this movie is about a father and daughter’s relationship. And I feel it has more connect than anything else — the bond between a father and a daughter.

Go on…
Well, I’ve seen that bond with my father and my sisters (Priya Dutt and Namrata Dutt). It was the way he connected with them. I think that for a father, his daughter is far closer. There’s always a stronger bond between the two. At least, that’s what I think.

You did a similar movie in the past called Pitaah. Did you draw parallels between your role in that movie and Bhoomi when you signed up for it?
I didn’t find any similarities.

Do you think in popular culture, the father and daughter bond doesn’t get shown much?
Firstly, I make commercial cinema. I work in those kinds of movies. Bhoomi is a very, very commercial movie with a kind of a message. In today’s day and age, I believe in beti bachao, beti padhao. And I believe in women empowerment. It’s possibly because I’ve been surrounded by women all my life. Starting from my mother, my aunts, my sisters, my wife and now my daughters too. I have a special connect with all the women in my life.

You have two daughters. Trishala is in her 20s, while Iqra is still growing up. How do you connect with them both?
See, Trishala is a grown up woman now; she’s a lady in her own right. I have to bond with her in a completely different way. With Iqra, I’m going through the phase of bonding in a whole different way. But there’s nothing difficult in either of the scenarios. After all, they’re both my kids and that’s where the chapter ends. My kids will be my kids. Period.

How well did you get along with your on-screen daughter Aditi Rao Hydari?
It was very nice. She’s a very good actor herself, and we got along very well. During the course of shooting the film, we had to bond well together to get those emotions out and get them right. And that was great. She’s also a wonderful person.

Have you had a tough time with the action sequences you’ve been shooting for?
No, it wasn’t difficult at all. Maybe the weather when I shot for Bhoomi wasn’t the best. It was the Chambal forest and the heat and dust can get to you. But that was it. The rest of it was okay to deal with. I didn’t have any trouble with the action scenes.

Your last few roles in the Munnabhai series, Zanjeer, Agneepath and more have seen you take on varied characters from comic to villainous. How do you choose your roles?
You have to hear the subject. And that subject has to excite you. For example, Agneepath excited me a lot. I had never played an all-out villain before, an actual bad guy. I think, the character of Kancha Cheena was larger than life. But most of all, I really enjoyed working in that film.

There have been quite a lot of romantic lead roles you’ve played over the span of your career. Do you feel like being a romantic hero again?
Well, now I can’t play the romantic lead, can I? Except if it’s a mature love story; then it makes sense for me to do it. I’m absolutely okay with doing age appropriate roles.

There’s a biopic being made on your life. Did you think your story could be a subject for a movie?
I could never imagine that happening. But there’s something in my story that must have intrigued Raju (Rajkumar Hirani) that he really wanted to make this. My process with Raju and Abhijat (Joshi, screenwriter) was a great one. We spent a lot of time together talking about things. It helped that it was Raju making it. He’s the only guy to make this biopic.

Do you think Ranbir Kapoor will do justice to the role?
He’s perfect. (smiles)

You’ve done television once before while hosting Bigg Boss. Does it still have an appeal for you?
Absolutely. If I get something interesting, like a good talk show, why not?