Big John bares his funny side

The actor, is half Malyalee and half Parsi, wanted a respite from serious films. 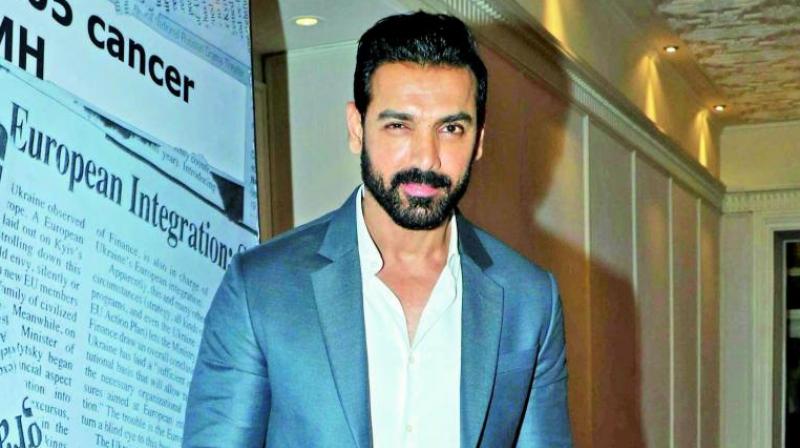 With his enviable physique, killer looks and gentlemanly demeanour, John Abraham (46) can sweep any woman off her feet. But after gripping the audiences with films like Batla House and Parmanu, John is making a comeback to comedy with Pagalpanti, a family-friendly movie directed by Anees Bazmee. The actor, is half Malyalee and half Parsi, wanted a respite from serious films. John has realised that coming back to comedy has increased his fan base, as people from all age groups and walks of life love to have a hearty laugh.

How does it feel doing a comedy movie since you have been doing serious films lately?
I am very happy to return to pleasing family audiences after a long time. I can confidently say that people of any age, be it a six-year-old or a 96-year-old, can watch Pagalpanti together. There are no double meanings at all. It is a clean film that is still entertaining.

Why did you choose to do Pagalpanti in particular?
I wanted a little breathing space as well as a break from serious films, which is why I took on this film. I still enjoy serious films like Batla House and Parmanu, but Batla House was really heavy. This film will reach out to everybody, it’s a light-hearted movie. It will be multiplying your audiences, while adult films divide your audiences.

People say audiences should leave their brains behind before watching comedy films. Is it the same for Pagalpanti?
You cannot critique this film, it is harmless, fun-filled, simple, and sweet. The hilarious comedic scenes will surely bring the house down with laughter.

Has your style of comedy improved with each film?
Yes, I had just started my film journey before doing Garam Masala, so I was very nervous. But I had Akshay Kumar, Paresh Rawal, and Rajpal Yadav who helped me give my best, whatever I did.  Like a painting can only be loved if the painter has painted a beautiful picture, characters that actors paint on the celluloid need to be painted to the best of our abilities. I improved with every film, as I always try to break the benchmark that I may have created in my previous film. For example, director Aneeze Bazmee told me that my performance in Pagalpanti is 10 times better than Welcome Back. I am lucky to work with him.

Have you watched Akshay Kumar’s Housefull 4? Where do you stand on the bad reviews it got?
I know for the fact that people want to laugh. During the festive season, you ask anyone where they’re going, they will respond, ‘to watch Housefull 4. Akshay’s film has done well, and I am happy that this genre works. But I have not watched the film myself.

Your films often have a touch of politics in them, which can stoke controversy. How do you deal with the repercussions?
My dad is very politiclly aware, so I know a lot about politics as well. I make sure my films comprise a hint of politics, and I express my opinions based on what I understand. I am not affiliated with any political party so I deal with the repercussions as they come. During the release of my film Madras Café, an activist asked me how I could deem LTTE leader Prabhakaran as a terrorist. I simply replied that he killed our prime minister (Rajiv Gandhi). My films Batla House and Parmanu also saw certain objections that I had to face. I do not know why people object, but it’s very important, to tell the truth through certain films.

Do you think actors should do films that teach something to the audience?
Actors are not models, they are role models. If you are aware of something then speak on it, but don’t just hold a placard if you are not. Don’t say anything because Hindustan is more sensitive now, and what you say will be taken out of context. If I am saying something about the Aarey Colony, it is essential for me to first know how many trees have been cut, where the Metro car shed will be made, whether or not there are alternatives, etc. I would have to know this first and only then make a statement.

How do you deal with such controversial subjects with such ease?
It’s honestly because I know more than many other people in the industry. For example, I pay attention to why India backed out of RCP deal. If I were to ask 10 people about RCP, nine of them may not even know about it. Every actor needn’t know about everything, but I just read and so much, and I go back into the history of that topic. I do so much research, and only speak to the things that I know about. That is how I am able to get my message across clearly, this is very essential.