Here is a glass of hot wine!

Wine is definetly an inevitable part of fine dining. How about trying a piping hot spicy mulled wine. 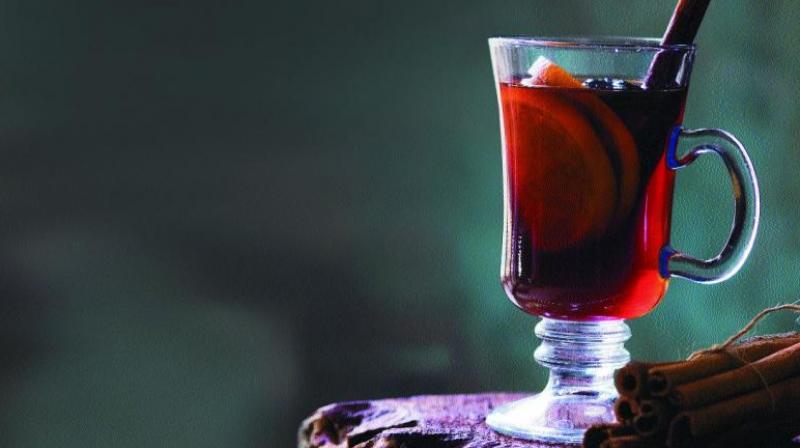 A more elaborated version of usual red wine is the mulled wine that has also become an inexplicable part of various celebrations in different parts of the world. (Photo- Sony Dinesh)

Wine has been a cultural symbol of fine dining for decades. It has evolved as a part of life and diet and has gradually shifted from being just a source of nutrition to a complement to food. Be it meat or cake, the strong alcoholic yet fruity flavour of  wine that is attained by fermenting fruits (mainly grapes) makes it one of the most preferred accompaniments for various kinds of savoury dishes as well as desserts.

A more elaborated version of usual red wine is the mulled wine that has also become an inexplicable part of various celebrations in different parts of the world.

The warm, sugary and spicy beverage that is usually made with red wine combined with various spices, berries and raisins has been an intrinsic part of X-mas celebrations since the 2nd century A.D. Mulled wine is a term used to describe wine, usually a red variety, infused with spices and served warm. Bitter orange is a common additive; however, certain recipes use figs, ginger, or even raisins instead. Alcohol-free mulled wines can also be made by doing small alterations. The red wine can be replaced with fruit juice or boiling the mixture until the alcohol has evaporated off is also an option. Alcohol-free versions are usually simply referred to as mulled cider.

Mulled wine is said to have been created in the 2nd century by the Romans who would heat wine to defend their bodies against the cold winter. As its popularity continued to grow throughout the Middle Ages, Europeans would mix heated wine with spices because they believed it was good for health and prevented the body from various sicknesses.

Mulled wine has become a favorite tradition during the winter months because of its warming qualities.

Sony is a passionate food photographer who loves capturing and recreating the traditional food, which is not much in vogue today.

Depending on the country of origin, mulled wine is called by different names. It is popularly known as Glogg in Sweden, Vin Chaud in France, and Glühwein in Germany. There are slight variations in ingredients as well depending on the region.

Though usual mulling spices include cinnamon, cloves, nutmeg, star-anise, allspice, and vanilla, the addition of fruit or sugar to sweeten the mixture also varies from recipe to recipe.

The type of alcohol included in mulled wine again varies from recipe to recipe. Most recipes begin with red wine and may have one or more other liquors like Vodka, brandy, rum, cognac, sherry, and akavit added.

Mulled wine is popularly called Glogg in Sweden. It mixes a fruity red wine with strong alcohol drinks like brandy or rum. They add cardamom, cinnamon, cloves and ginger to spice it up and then top it off with some raisins and slivered almonds. For a nonalcoholic Glogg, one can substitute orange juice and grape juice for the alcohol.

Russia's Glintwein is almost same as the German recipe.

Bulgaria's Greyano Vino recipe is red wine heated with honey and peppercorns, for a bit of the sweet and spicy flavor.

Method
Combine all the ingredients and heat it in a saucepan over low heat.(Do take extreme care not to boil the wine)
Simmer for half an hour to one hour to allow the spices to infuse thoroughly.
Serve hot or warm.