A Journey of faith

Leo travelled through various parts of India for five long years before he could put the book together. 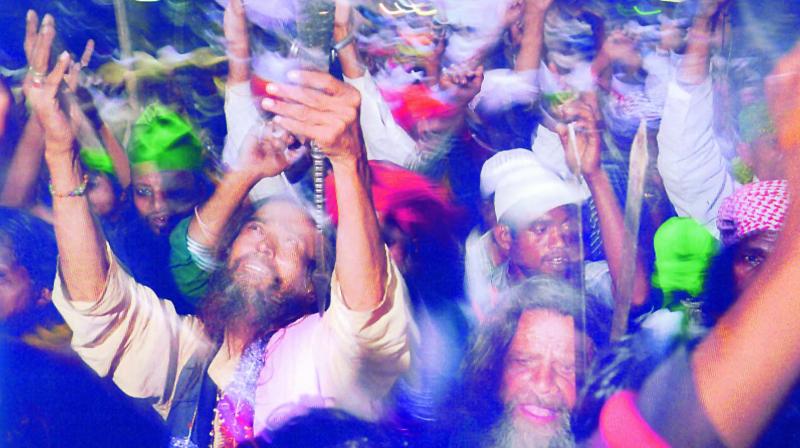 Piligrims reach Ajmer and react to the first sight of their destination: the shrine of Sufi saint Moin-ud-din Chishti.

Drawn by the land’s spiritual appeal, photographer-author Leonid Plotkin’s travels through the Indian subcontinent brought him closer to the ‘ultimate truth’ and resulted his book Nostalgia for Eternity: Journeys in Religion, History and Myth on the Indian Subcontinent.

The diverse religious traditions of India has attracted many people. The land blessed with poets, philosophers and scholars of various faiths has been visited by many time and again to discover the ‘ultimate truth’. In a zest to understand India and subcontinental religions better, photographer-author Leonid Plotkin came to India in 2009. After spending five years in India photographing people from various faith, Leo has now published his book Nostalgia for Eternity: Journeys in Religion, History and Myth on the Indian Subcontinent. 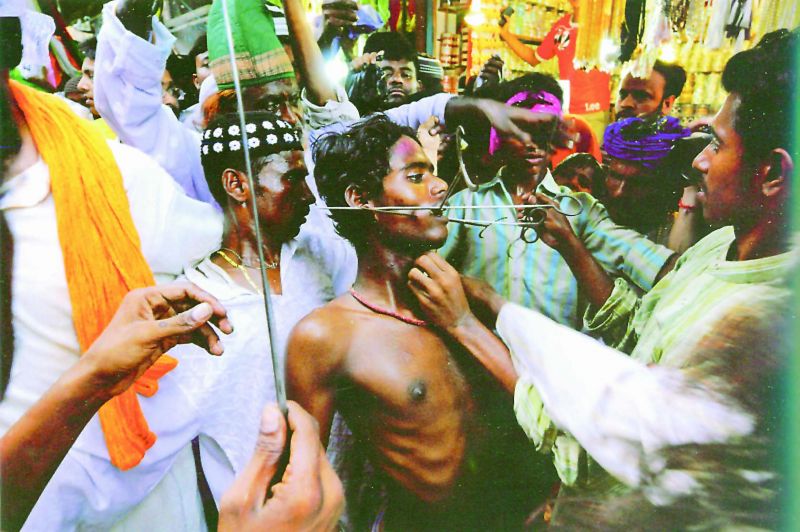 A self-mortification ritual of the Rifa’i fakirs, a lineage known for extreme practices. Very few Sufis engage in such rites 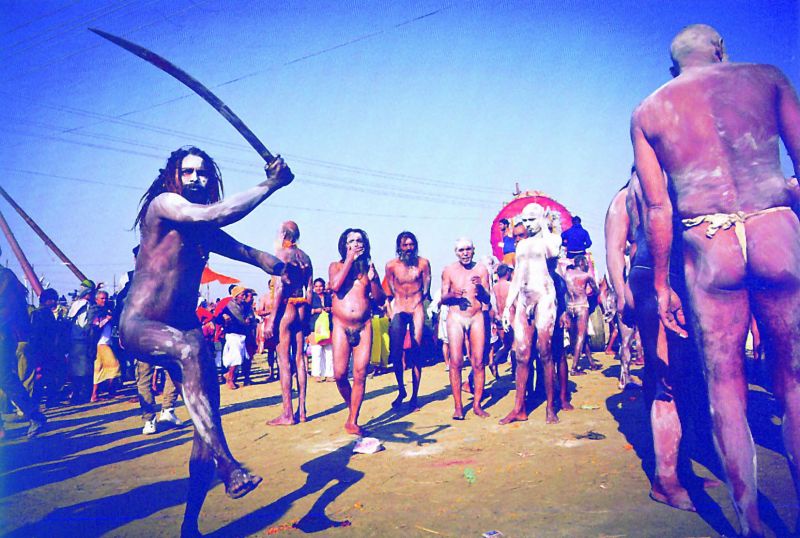 The ghost of armies past. A naked sadhu brandishes a sword after his ritual bath in Ganges

Ask the photographer why he chose India as his subject, and he says, “What makes India unique in the modern world is not only the variety of approaches to ‘ultimate reality’ that people here continue to pursue, but also the antiquity and historical continuity of its many living spiritual traditions. I chose to photograph in India because here the ancient river of spirituality, with its source forever hidden in depths no one could ever plumb, continues to flow unimpeded. Over the centuries and millennia, it has sometimes changed course; it has run higher and lower; it has merged with other currents, and it has branched out innumerable times. But in contrast to many other civilisations, in India that river has never been dammed and has never run dry. So I came to photograph in India because I hoped that by exploring that river and its many branches and tributaries I could approach something beyond history and beyond time, and also have a glimpse of the paths that others follow in search of the same.” 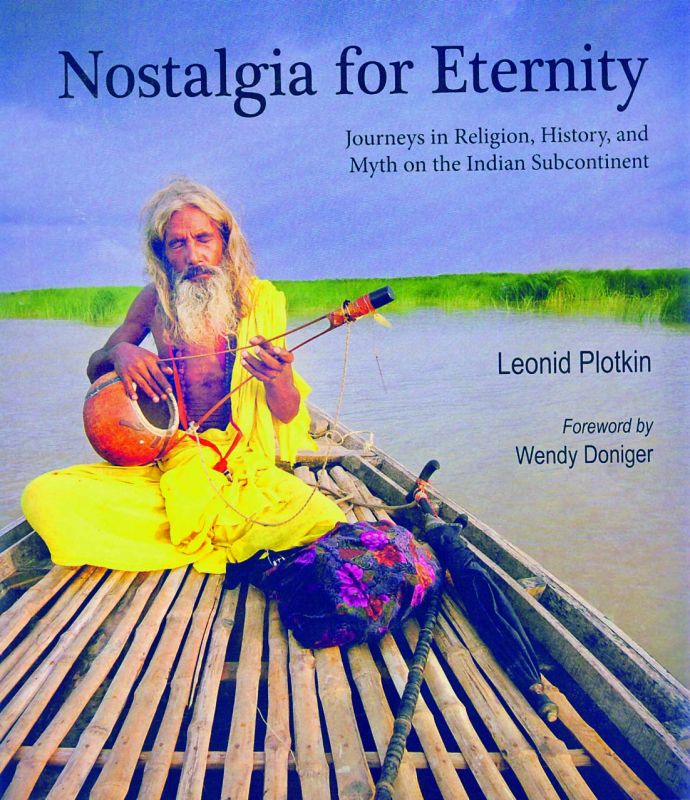 The book cover of Nostalgia for Eternity: Journeys in Religion, History and Myth on the Indian Subcontinent by photographer-author Leonid Plotkin 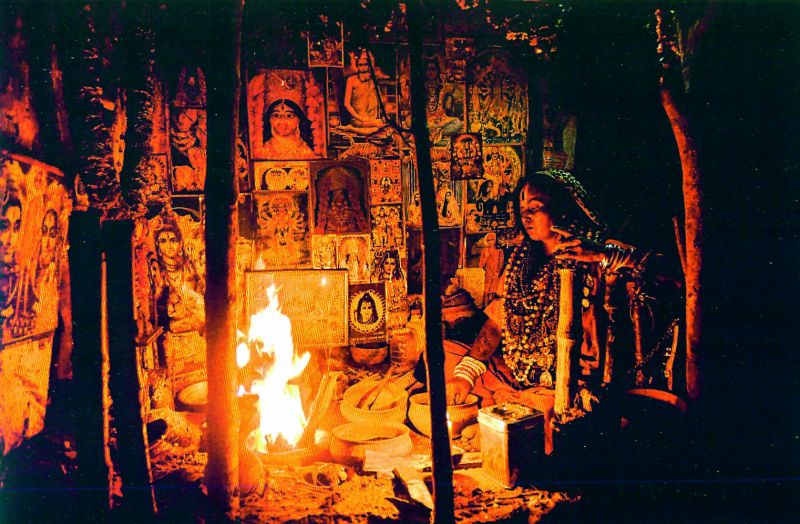 A sadhvi, or holy woman, in Tantric practice

Leo travelled through various parts of India for five long years before he could put the book together. He reveals that he had to battle a few wars before he got those magical snaps. One challenge that he faced time and again was language.

A sadhvi, or holy woman, in Tantric practice 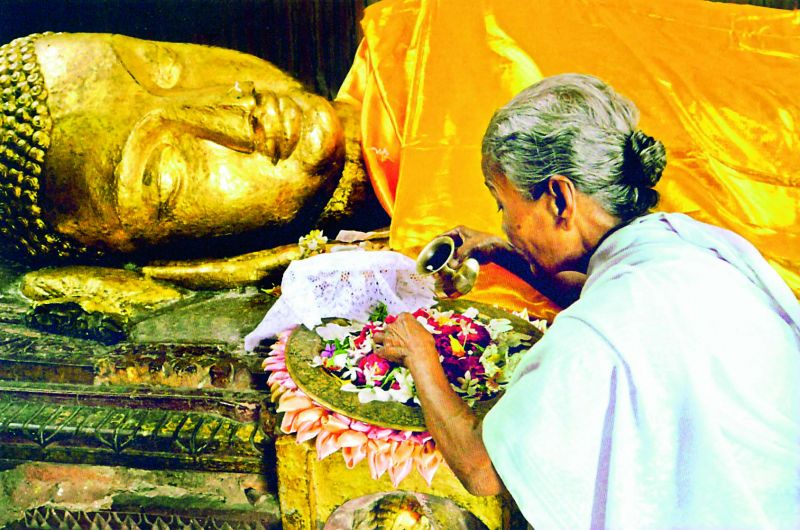 A piligrim makes offerings in front of an ancient gilded structure of the dying Buddha in Kushinagar near the place where he died, probably in his eightieth year. His last words were reported as, “Decay is inherent in all worldly things. Strive for your own liberation with diligence”

“Communication was difficult sometimes, but remarkably even in the most remote places sooner or later someone who could speak at least a few words of English would often magically turn up. And not infrequently in the kinds of situations where I was photographing speech was superfluous. A smile, a gesture of namaste, a slight bow with a hand placed on the heart, this was all the communication that was often required.

“The challenges had more to do with practicalities. Food was never a problem. But I slept in many uncomfortable places. For someone coming from the West, the lack of personal space is also quite trying. Most Westerners are accustomed to privacy and solitude, both of which are hard to come by in rural India, especially for a foreigner.”

The photographer-author shares that working on the book opened his eyes to the beauty and variety of traditions that exist beyond the conventional categories of Hindu or Muslim or Buddhist. Sharing an anecdote from his travels, he says, “I knew a Baulfakir in a village in West Bengal, Halim. He and some other Bauls were invited once to perform at a folk music festival in Paris. So Halim flew to Paris, his first time on an airplane and outside of West Bengal. He spent a week in Paris, and the organisers took him on tours and showed him the sights of the city. I was very excited for him; thinking about what an amazing experience this would be if I were in his situation. ‘So did you like Paris?’ I asked him when he returned. It turned out he was completely unimpressed. What he could see of Paris — the resplendent monuments, the stately architecture, the lights, the restaurants, all the glamor and sparkle that awes tourists and visitors to the city — all seemed to him unimportant. ‘So do you want to go to Paris again?’ I inquired. He shrugged, ‘If they invite me, I’ll go; if they don’t invite me, I won’t go.’ It made not a bit of difference one way or the other. Though a poor man living in a village in West Bengal he had everything he needed right there. Contentment was within and not in Paris or anywhere else.” 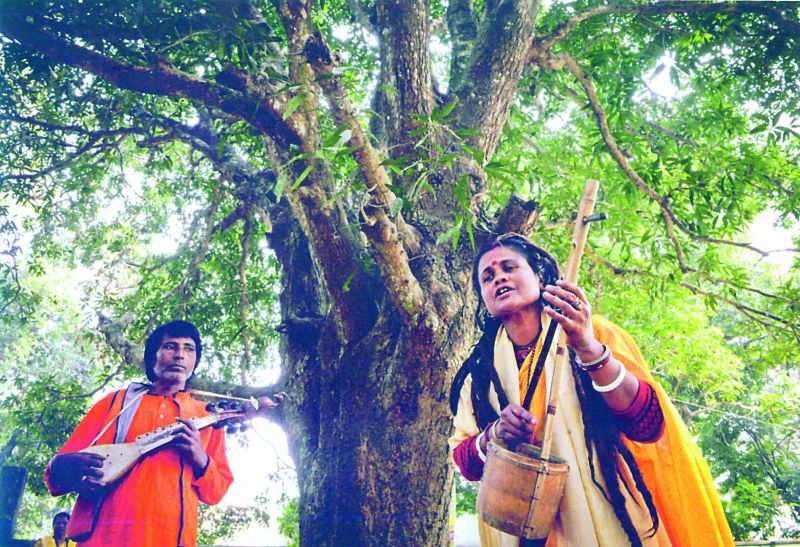 Bauls sing at a gathering in a village in West Bengal

Leo adds, “There have always been people in this land who have succeeded in seeing beyond scriptures and theological strictures, when the old and inherited religious forms became stifling instead of liberating. Kabir, for example, is another great saint who immediately comes to mind. 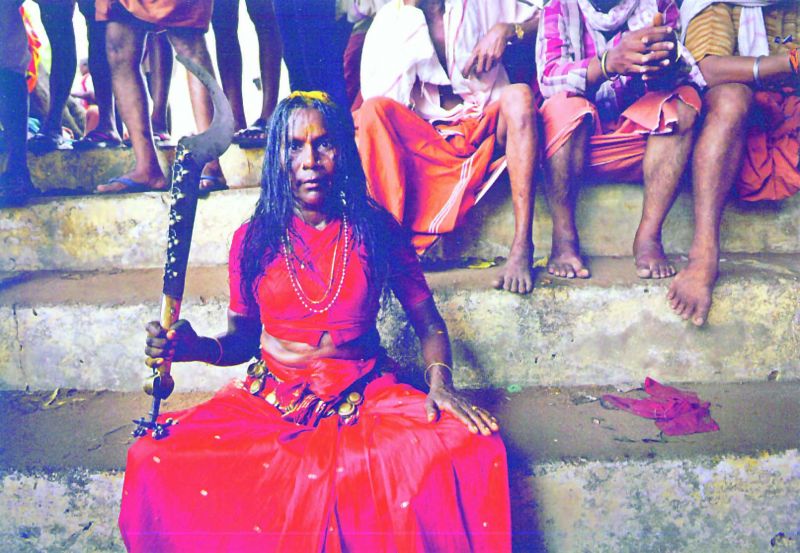 An oracle of the Mother Goddess. Ther are called Velichappadu, literally ‘the illuminators’, or ‘the bearers of light’

“In our time, when literal and exclusionary interpretations of various religious creeds continue to spawn so much suffering and oppression, the example of India’s mystics and syncretic spiritual traditions is a powerful reminder that no single theology has a monopoly on the truth. The beauty, depth and spiritual vitality of these traditions shows that it is not people who exist to serve the demands of religious dogma, but rather religion that exists to serve the best and highest aspirations of human beings.”