Zimbabwe is as fascinating as it is adventurous for an amateur traveller. But above all, it is one of the most spectacular places in Africa. 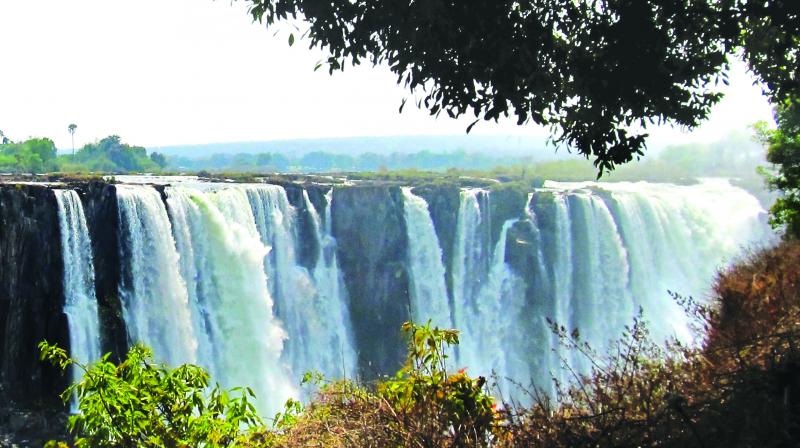 Mention Zimbabwe and people will come up with unfortunate stories, and hostile scenarios. I, however, ignored the doomsayers and travelled to this southern African destination to explore this mesmerising country, where elephants seem to outnumber humans.

First stop was Victoria Falls, which is acclaimed as one of the seven natural wonders of the world. Here, the tourists come in droves. As we stepped outside Victoria Falls airport, a merry band of Zulu dancers welcomed us with unearthly sounds and wild gyrations to drum up the typical tribal experience.  Fried mopane worms and crocodile meat were on the lunch menu. This was really, truly Africa!

The next day we took a two-kilometre-long walk around the falls. The imposing statue of the discoverer David Livingstone glowered at us from the starting point.

At every turn there were stunning views of the Victoria Falls, rightfully described as the “smoke that thunders.”  A bridge across the treacherous falls connects Zimbabwe and Zambia and is a favoured spot for bungee jumping. A helicopter ride enables you to get a better view of the Zambian side. (However, quite unfortunately, one can click pictures through the glass windows only.)

The Hwange National Park, which is situated on the country’s border with Botswana, is only a few hours’ drive by road from Victoria Falls and spans 14,600 square kilometres. We stayed at the Safari Lodge, which is poised at the edge of a waterhole. Baboons and birds were all over the lodge. Curious impalas made eerie apparitions outside our windows at daybreak. Lions, elephants, giraffes, elands, kudus and others made daily visits to the waterhole. The animals seemed to co-exist peacefully. Only the arrival of the lion set off whoops and warnings and caused the abrupt disappearance of all the other drinkers.

The games drives, which venture deep into the bush, were exciting. We found our jeep surrounded by elephants at several places. The driver would stop the vehicle in deference to the black giants; and they weren’t even curious about us. For once, it was a great relief to be ignored.

The deer seem to know when the lion isn’t hungry. They get alarmingly close when he’s resting, but make sure one member of the herd is posted as a watchdog — it was interesting to watch this scene. The lion simply ignored them as they grazed barely fifteen feet away from him. The watch-deer looked relaxed but fixed its gaze on the predator, ready to sound a warning at the slightest change in his body language. 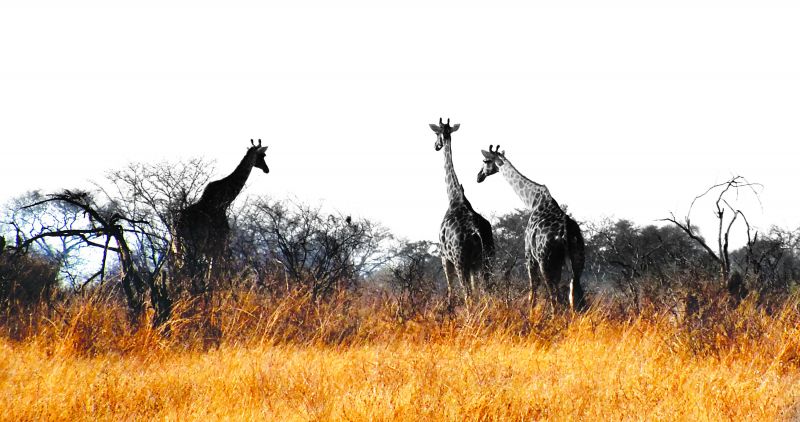 A herd of giraffe at the Hwange National Park

A hunt occurs once every few days — and only the luckiest of tourists get to witness this deadly dance of the lionesses. However, don’t even think about taking a walking tour with the guides, for not everyone is fortunate enough to get back.

At dinner a swooping eagle stole my fried impala. No wonder — because it tasted divine!  The locals eat elephants we were told, but all they served us was eland, kudu and other deer varieties.

Harare, the capital, is well connected by air to all major African cities, but crime is a concern. Border-crossing is a high-risk activity and road journeys can be harrowing. Political discourses are an absolute no-no. The local currency is worthless — and out of circulation except for the trillion dollar notes they sell as mementos. I picked up a five trillion note for a few minor greenbacks — and felt like a true-blood trillionaire.

A sunset cruise on the Zambezi evoked semi-spiritual vibes. Hippos and crocodiles in the water, and elephants on the shores. Mouth-watering meat snacks and beer served on board. Delightful conversations with the staff. An exquisite blend of sound and silence — Zimbabwe is a must-visit destination for the adventure hungry traveller.

Pushpa Kurup is an IT professional and a travel enthusiast