‘I never refuse a good role over money’

Swara Bhasker opens up about her new venture, battling trolls on a regular basis. 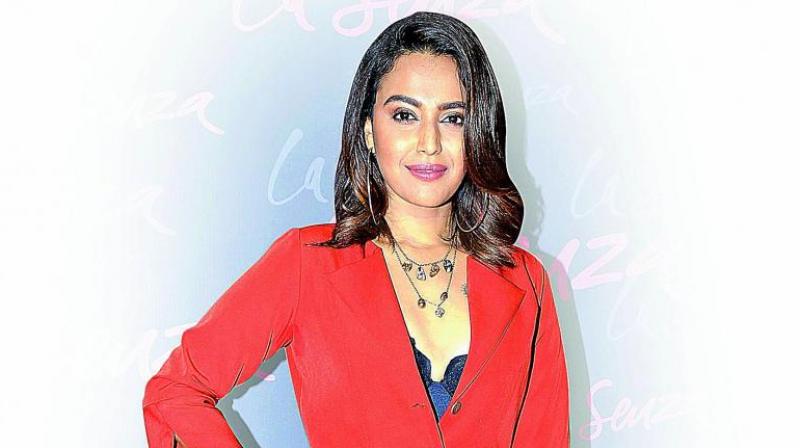 While her last film, Veere di Wedding (2018), created quite a stir, we haven’t seen much of Swara Bhasker on the big screen. The actress who has headlined critically acclaimed films like Nil Battey Sannata (2016), and Anaarkali of Aarah (2017) in the recent past has been in the news, as she vociferously lent her support to the #MeToo movement, and is often seen unflinchingly airing her views on events unraveling in the country. The actress also has to deal with online trolls, but she continues to soldier on the path she thinks is right, which is perhaps why we even saw her campaigning for political opponents this year, in the run-up to the Lok Sabha elections. Swara has also been busy on another front, as she forayed into production with her production house, Kahaaniwaale in January this year. We caught up with the actress to find out about her plans post turning producer and all that’s keeping her occupied at the moment.

Since your last film, Veere di Wedding, the wait to see you on the big screen has been long. Are you consciously not taking up films at the moment?

Honestly, yes. After Veere, when I looked at my filmography, I felt that whatever film that would come next has to be a notch higher in terms of my performance and the script. Films such as Nil Battey Sannata and Anarkali of Arah have been landmark films, not just for me as an actor but also for Bollywood. Meanwhile, I got web-related projects that I liked. I am working on an interesting film at the moment and am also producing another.

Also, since last December, I have been busy setting up my production house, finding the right story and acquiring the rights from the concerned person. The last six months have been a transition period for me, and it’s exciting and challenging. I really wanted to challenge myself and push boundaries with my next film, which is a biopic on Krishna Sen.

What is the Krishna Sen biopic all about?

We are in the process of scripting and once we have the script, we will know how to go about it. I need to bulk up to look like a man because Krishna used to dress up like a man. She is a woman who feels like a man. I need my body to look the part; I will have to cut my hair too. We may go on floors by December.

How do you plan to make the film viable?

I have taken charge and decided that I will take a subsistence fee. I have told my brother, who is the co-producer of my film, to pay me so that I can meet my monthly needs, whether it is my EMI or salaries for my staff.  I think I should set an example of making the film viable as it has to be made with the right budget.

I didn’t come to Mumbai to make money; I came here to be a star and to be known, which is different from making money. If I’ve liked the script, I have often told the producers that we will work out the money aspect later, but I never miss out on a film that I want to be part of. I hope the actor in me remains alive enough to never refuse a good role over money.

Your work has been critically acclaimed, but you haven’t won many Awards. Does that bother you?

I don’t fret about things I can’t control. It is not just National Awards; I have never got a Filmfare despite being nominated every year for my performances. So that’s okay, what can I do?I don’t want to think about what I have not received because it creates bitterness. I have been in that phase, where I felt that I am not getting what I deserve.  As far as National Awards go, it’s a government thing. I have spent most of last year calling out the government regarding various issues. So I doubt I will be a favourite candidate. But that’s fine.

So is that the price you pay for being outspoken?

I think so. Any choice you make in your life will have consequences. If speaking out has consequences, then I am sure staying silent will have different kind of consequences too. For me, I just don’t want to be that person.

With so much competition around, do you feel nervous or insecure?

I used to be anxious about my career, but between Nil Battey and Veere, the anxiety has vanished. If you ask me what other actresses are doing, I don’t even know. I really don’t feel insecure. It’s been nine years in the industry and  it doesn’t bother me. There is no dearth of good work as long as you keep working on your craft. What I am really worried about is my craft getting stagnant and this is my great anxiety. I want to learn something new and hone my acting skills.

Have you become thick-skinned or does online trolling still affect you?

I just don’t read comments. I am sorry to say this, but unless it’s from a verified handle I refrain from reading them. I look at it when I want to torture myself. Otherwise, I don’t read them, because it’s so horrible and why should I bring that negativity into my life? So now, I have become immune to it. A lot of people have supported me and I am grateful to them.

Recently my mother read some of the comments, and she was crying when she called me. She asked ‘how can people write this about you, how do you deal with this?’ I told her, ‘mom, never read my comments’.

Most of the #MeToo accused have gotten a clean chit. What do you think is the future of the movement?

I think people don’t realise that it’s not an organised movement; it was an expression of people and their stories.  Everyone used the hashtag, so it felt very organised. There is no founder or participants in this movement, and that should be clear. You have to see it more as a social phenomenon and as an expression of real life experiences of women. Sexual harassment at the workplace is a universal phenomenon and it’s a plague. The problem is that we don’t really know what qualifies as harassment at work. A lot of stories that came out as #MeToo — and I am saying this as someone who is sympathetic, I don’t think it was sexual harassment at the workplace. Yes, maybe it is sexism, but was that sexual harassment at the workplace? I don’t know. So, we should use this opportunity to start having conversations. It’s true that not enough has been done.

You took part in political campaigning this year. Would you ever quit films and join politics?

I don’t want to give up on films right now. I campaigned for people whom I believed in, but I don’t want to enter politics at this moment. That was not my intention, but I can’t speak about 15 years from now. But for the next five years, I am very keen on concentrating on my film career.