DNA and police investigations revealed that she was held inside a local temple where she was drugged, raped and killed. 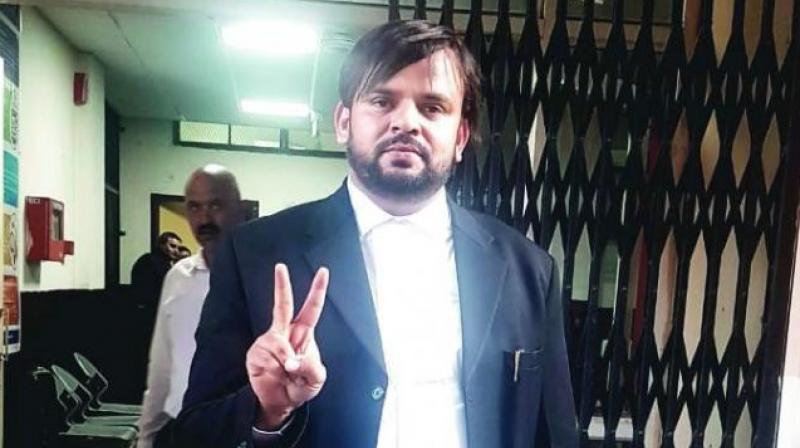 Mubeen Farooqi making a ‘victory’ sign outside the Court in Pathankot.

Eighteen months after the heinous Kathua gang rape and murder rocked the nation, a group of determined, hardworking professionals worked cohesively and against all odds to bring the accused to book

A week after an 8-year-old nomad girl went missing on 10 January 2018 in Rasana Village of Hiranagar Tehsil of Jammu and Kashmir’s Kathua District, her body was found in the woods near her village. DNA and police investigations revealed that she was held inside a local temple where she was drugged, raped and killed.

The police arrested eight persons, including the caretaker of the temple, his son and a Special Police Officer for their alleged involvement in the crime. A police Sub-Inspector, a Head Constable and another SPO were also arrested on charges of destroying evidence. The Crime Branch (CB) of the J&K police, which investigated the case, concluded that the girl was targeted to terrorise the Gujjars and other nomadic Muslims into leaving.

They were sentenced to life imprisonment and fined Rs 1 lakh each for murder, with 25 years in jail for gang rape. Police Sub-Inspector Anand Dutta, Head Constable Tilak Raj and SPO SurenderVerma, convicted for destruction of evidence, were fined Rs 50,000 each and handed five years’ imprisonment.
For Mubeen Farooqi, the lawyer at the Punjab and Haryana High Court, Chandigarh, who represented the family of the Kathua victim in the court, it was about team work. “Everyone in the prosecution team worked hard with a strong sense of commitment and need to deliver justice,” he says.

Mubeen, as President of the Muslim Federation of Punjab, decided to meet the victim’s parents at Rasana more than a year ago, amidst the mass protests over the crime. He wanted to help them. But Hindu right-wing groups and lawyers protested the arrest of the eight men. All of them pleaded “not guilty” to the charges against them. However, the gory incident evoked widespread outrage across the country, with various political, social and rights groups demanding exemplary punishment for the accused.

After the Supreme Court ordered the case to be moved out of J&K, the day-to-day trial commenced in the first week of June 2018 at the District and Sessions court in Pathankot. Mubeen, a resident of Malerkotla city in Punjab’s Sangrur District, volunteered to represent the victim’s family in the court.

But Mubeen soon found himself to be the victim of severe intimidation. “I faced extreme bullying, abuses and character assassination on social media. But when I remembered what that little girl had to endure, I found the courage I needed and knew I couldn’t stop till I brought her culprits to justice,” he recounts.
There was lot of pressure from different quarters wanting to influence the trial. “This wasn’t just a case but a mission for me to fulfill. And Alhamdulillah (Praise be to God), it’s SatyamevJayate (Truth Alone Triumphs). This victory belongs to all communities — Hindus, Muslims, Sikhs and Christians,” reveals Mubeen.

Team effort that pushed through

Helping Mubeen were other equally committed professionals whose sole purpose was to see that the proceedings were taken to their logical conclusion and that the court dispensed justice. They included Pathankot’s district attorney Jagdishwar Chopra and advocate Santokh Singh Basra and J&K police Crime Branch (CB) prosecutors Harminder Singh and Bhupinder Singh. In fact, before the accused were moved to the Gurdaspur central jail in July 2018 following an SC directive, the CB duo would bring them all the way from Kathua to appear before the District and Sessions court at Pathankot despite the many risks involved. The CB in Jammu not only collected very strong evidence against the accused but also engaged a talented team of prosecutors.

"Religion or ethnicity was not a consideration for anyone in the team. All that mattered was delivery of justice,” emphasises Mubeen.

Noted lawyer Indira Jaising, known for her legal activism in promoting human rights causes, is another person Mubeen applauds here. “Several people want to take credit now, but it was Indira Jaising who made every effort to ensure that the case was sent out of J&K where the accused had a nexus with a particular brand of politicians and some government functionaries. Her efforts ensured that the SC transferred the case to Pathankot. She and her team worked very hard and were regularly in touch with me to collect all relevant information and to advise me on the case,” he says.

A three-judge bench led by the then Chief Justice of India Dipak Misra also directed the trial be held daily and in-camera and said it would monitor the trial, asking other courts to stay off the case.

Problems were aplenty, but Mubeen faced them all with the courage of the determined. For instance, some of the more than 50 lawyers representing the accused objected to Mubeen’s appearing on behalf of the victim’s family, stating that the SC had not issued any such directive. But the judge overruled the objections after Mubeen and others submitted a strong argument. Over that, some members of the Kathua Bar association openly backed the accused and heckled the prosecution team, even preventing the accused from being produced in court.

However, the victim’s family, Mubeen and some other members of the prosecution are not happy with the quantum of sentences and the acquittal of Sanji Ram's son Vishal Jangotra. They plan to move the higher court.

“We’d demanded capital punishment for the main convicts. Also, the police officials who became partners-in-crime were handed only five years’ imprisonment each, which is less severe than was expected,” observes Mubeen. IGP Ahfadul Mujtaba, who heads the CB, says the police will challenge the acquittal of the seventh accused if needed.