Aditi Rao Hydari is the very picture of poise in all walks of life. In a chat, she talks about her career and the world at large. 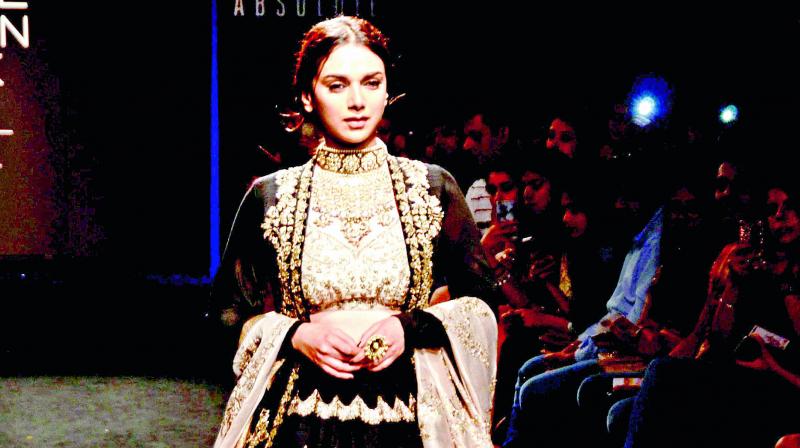 Hailing from royalty, Aditi Rao Hydari says that men and women were treated the same in her family. “Belonging to a family of educationists, I was treated in the same manner. Both boys and girls enjoyed the same privileges at home,” she says. “As a girl child, I was given the same sort of importance. And so I’m able to take my own decisions.”

She adds, “Ever since the time I entered Bollywood, I have been paying my bills and managing all my personal and professional work. Above all, existing here in Bollywood with dignity is what makes my mom proud of me. Especially when people visit my home and applaud my professional moves, it’s something that makes my mother very proud of me.”

With all the news of children being mistreated and abused in the society today, Aditi is concerned. “Anyone who is not in a position of power is considered powerless,” she sighs. “There could be instances of people who may be physically challenged in some way or the other and considered feeble. These people are often mistreated in some ways. We even see many times that little boys become victims of an inappropriate touch. Sometimes they’re murdered. We need to empower all children by educating them. Education empowers one and all in the long run.”

Even as she’s worldly wise, Aditi seems pretty focused on her career, as she charts her own way. “Nowadays everyone’s shouting ‘me, me, me’ from the rooftops. So in such a state of affairs, I don’t like to join the bandwagon. I like to go ahead slowly and wisely,” she explains. “I don’t like to keep shouting about my talent. I must confess, filmmakers see me in their characters and approach me, enabling me to be a part of some great films.”

How was her experience working with Sanjay Dutt and Omung Kumar in Bhoomi? “I never felt I was inferior in any way while working on Bhoomi,” she says. “I was allowed to give suggestions, and if I felt that as a girl, Bhoomi would never speak like this, Omung sir and Sanjay sir would accept it. I have always had a great working experience with all my filmmakers. And while the movie is about a father and daughter relationship and I play the title role of Bhoomi, Sanjay  never had an issue with the name. It’s teamwork. And Sanjay is so grounded that he doesn’t even realise the huge icon that he is.”

Aditi confesses that she’s happy at being picked by ace filmmakers. “I’m privileged and blessed to be working with the likes of Mani Ratnam and Sanjay Leela Bhansali. I remember, when I was working with Mani, I allowed him to speak first about his movie. Similarly, it would be great if Sanjay speaks first about Padmavati. I believe that they invest their hard work, and are passionate about filmmaking, breaking all boundaries with every film of theirs. So anything spoken by them first on behalf of their film needs to be their prerogative. They have that magic, that Midas touch in their work. I can only say I’m happy to part of a movie like Padmavati.”

The actress wants to do her bit to ensure natural beauty get its due in society. “As an actress, through my films, I would like to educate women that natural beauty need not be tampered with. In Bhoomi, I’ve not donned any make-up. Looking good comes from within,” Aditi says. “The more pious feelings you have, the more your outer beauty shines. We need to eat properly too. I eat well, but will eat biryani unhesitatingly too! One need not touch real beauty using unnatural processes. Through my profession, I will try to educate all youngsters that looking beautiful naturally will impress one in both reel and real life.”

Her ideas about living a holistic life translate into a larger part of her day-to-day activities. Quiz her on not being a party bug, and she says, “In today’s day and age, social media and publicising, and being present every day at parties has become all important. However, I beg to differ from the trends. I do not like to attend any party I’m not invited to. But if I am invited, I make it a point to be there to support my friends. Just recently, I flew from Hyderabad for interactions and to attend the premiere of Farhan Akhtar’s Lucnkow Central. I will see to it that I make my presence felt where I’ve been invited. In any case, I’m not somebody who wishes to be seen at industry parties, without any rhyme or reason. Mujhe randomly kahin dikhna pasand nahi (I don’t like to be randomly seen anywhere),” she concludes.