Out of the BOX punches

This unique fighting method between two people involves basic boxing steps that can be practised by all age groups. 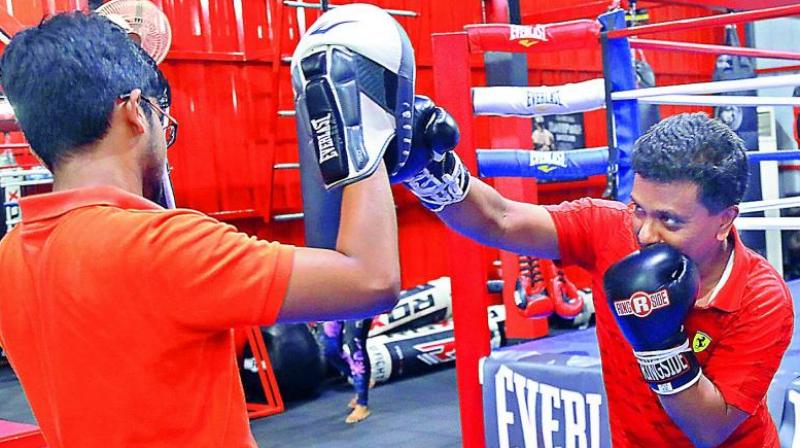 People in different age groups fighting it out can evolve into a core regime. Cross Age Boxing is a unique fighting method developed a few months ago under the mastery of CIAL director NV George and former Mr India KS, Vinod, at Title Boxing Club, a boxing studio in Kochi. This is to be performed between a younger and older person. Cutting edge training practices and state-of-the-art equipment in play, Cross Age Boxing involves a few basic and safer boxing practices that can be practiced by men and women across age groups. At the studio, this is a most sought-after training by members within a family say, a father-son duo, granddad-grandson, mother-daughter, or aunt-niece.

“Considering the energy level, the younger member is likely to be faster and accurate to make moves. The older person would have more power and experience, giving him/her an opportunity to scale up to the capacity of the other. This could considerably improve the punching speed and body movements. It does not matter if either one among them does not possess any prior experience in sports or physical activity. They would gradually learn the techniques,” says Vinod. The following moves can be done by those occupied with protective gloves and some basic knowledge on boxing.

Jab is a basic punch that takes comparatively less energy to deliver. It serves the purpose to punch, push or distract the opponent. Keep the hands up, elbows in and knees slightly bent. Bring up the back heel. When one hand is ready to strike, the other hand is in a position to protect the chin. Here, drawing his attention on focus pad, Anil is preparing to initiate fast punching.

Box master is advanced equipment that does not necessitate a boxing coach to hold the pads. It is meant for doing boxing style focus pad work out. Those who work out on the box master experience greater boxing style fitness. Participants here are indulged in conditioning their body on the equipment. Following the instruction from the trainer, they are punching on the printed numbers on the box master. At the end of it, each one would earn certain points based on the performance. It increases cardio capacity and improves cognition. Physically, a person may feel more agile. 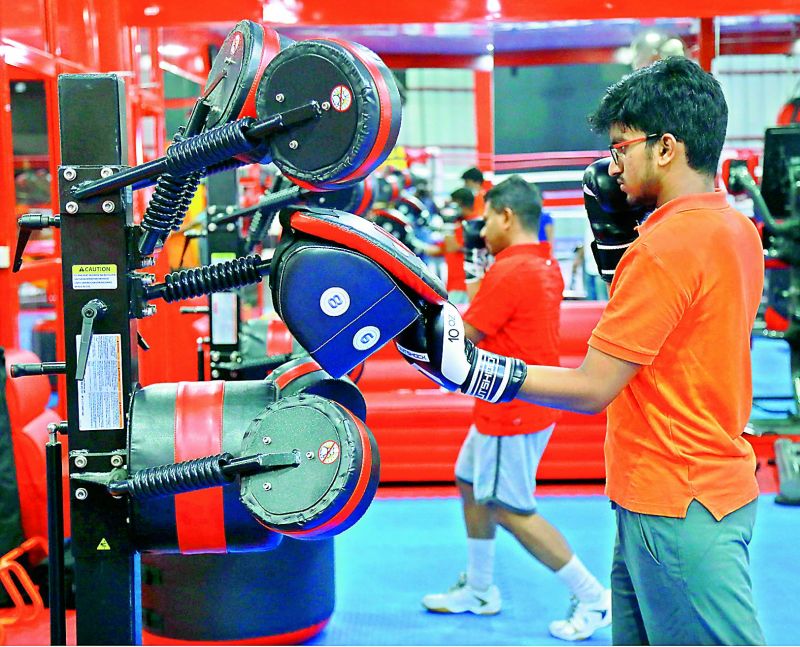 One of the most innovative and state-of-the-art boxing and fitness equipment available on store is Sparbar. It is a cutting-edge imported and patented product for those who are keen on taking boxing into the advanced level. It involves a hit and wave methodology. The bar, rested on the pole, can be rotated 360 degree. When one of the two participants rotates the bar, the opponent should deftly escape from it hitting on the body by pushing the bar with the hand. In the process the person may bend below the bar, and safeguard the position. For every hit, there would be negative marks. 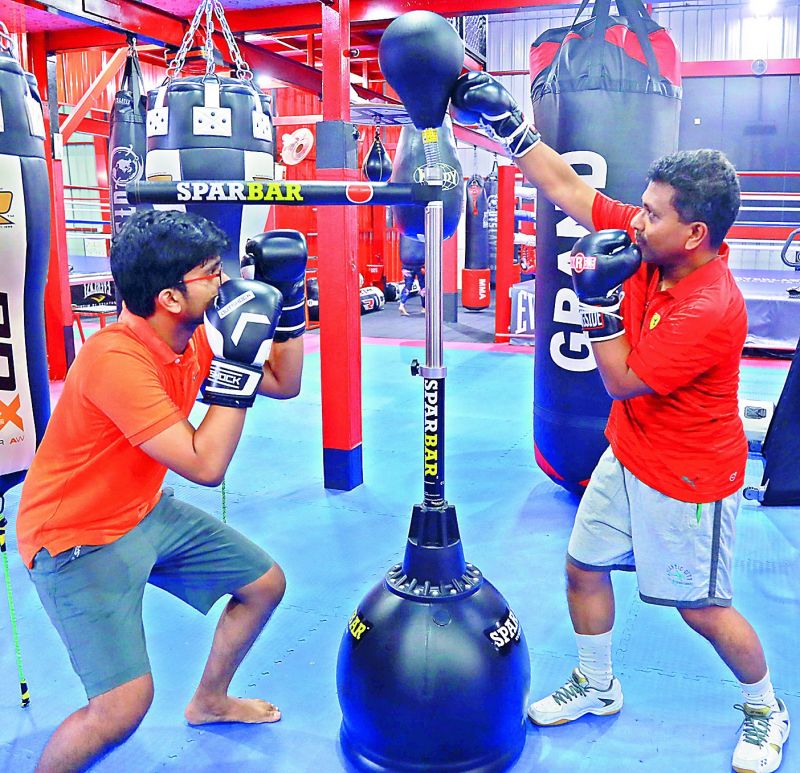 Another kind of punch in boxing, the right hook is “performed by turning the core muscles and back, thereby swinging the arm, which is bent at an angle near or at 90 degrees, in a horizontal arc into the opponent.” The punch is aimed mainly towards the chin, at other times, it is applied for body shots as well. Timing matters a lot to involve in this act. A badly executed right hook may, in the worst case, end up with the opponent finding it difficult to breathe thereby losing consciousness. The photograph shows an excellent timing that blocks a right hook targeted towards the forehead. Right hook increases internal stamina thereby helping a person to improve confidence. 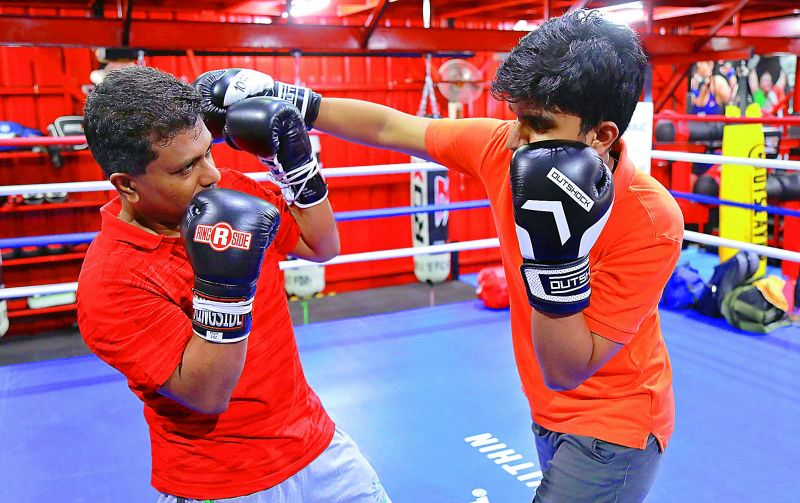 The punch travels in a vertical line towards the chin or solar plexus of the opponent. The closer the proximity between the boxers, the more dangerous the impact is. It begins from the opponent’s belly and moves in an upward motion. Here, a sharp uppercut from Anil is cleverly defended by Ankith. 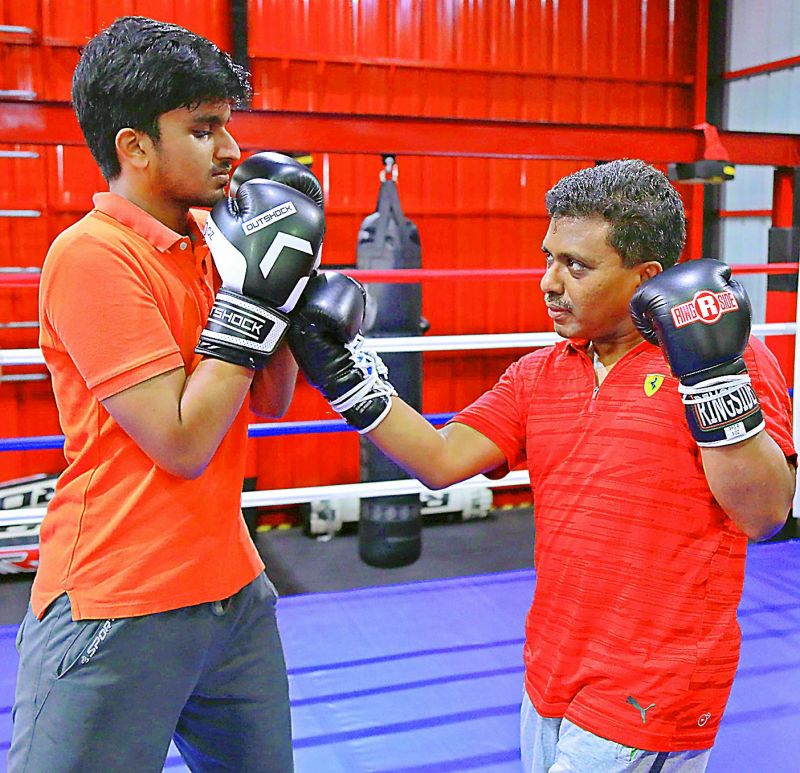