Age on Sunday   25 Jul 2020  Ain't we like this only: Indian Matchmaking touches a raw nerve
Age on Sunday

The latest reality series on Netflix has left netizens fuming. But is it because it’s too close to the truth? 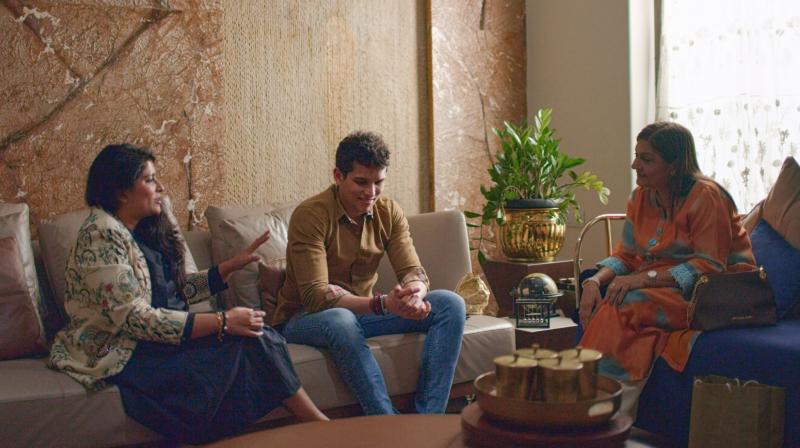 Still from the show 'Indian Matchmaking'

When corporate communication professional Rujuta Deshmukh’s mother set up her profile on various matrimony sites, Rujuta went with the flow and attended an event organised by one of these matchmaking sites.

To her surprise, the 28-year-old met her future husband and is set to get married in January next year. While Rujuta’s meeting was a typical arranged marriage scenario, there was no ‘kundali matching’ or ‘assessing the girl’ on the basis of her complexion or weight.

Mumbai-based Anindita Dey—married for over a year now — also met her husband through her parents. However, Anindita makes it clear that while it was her parents who set up the meeting, the final decision was completely hers.

She didn’t let anyone define her qualities or label her negatively for being opinionated and career-driven.

However, the reality around marriages, and arranged marriages in particular, changes when one logs onto Netflix’s reality series Indian Matchmaking by Smriti Mundhra, who was nominated for Academy-Award Best Documentary Short Subject in 2019 for her film St. Louis Superman, which she shared with Sami Khan.

Despite all of Smriti’s good intentions, netizens are having a hard time deciding whether to hate or love the show. Because Indian Matchmaking follows matchmaker Sima Taparia analysing families and boys and girls to find suitable matches.

In an age when people believed to be largely pushing away the stereotypes, breaking free from the regressive patriarchal mind-set of society, this show throws light on the ugly truth of Indian matchmaking.

Like it or not, the show accurately points to the realities of any Indian family that dives deep into caste, colour, height and an ‘adjusting’ girl while seeking a match for their son.

In other words, it hits the bullseye when showcasing the circus that Indian marriages, mostly considering how even the most well-to-do families can't still avoid checking the kundali, complexion or height among other conventional criteria.

Author and TEDx Speaker, Aditi Mathur Kumar, merely laughs out at the mention of the show. “I agree that the show highlights all the stereotypes we have been trying to break free from. But it simultaneously hurts because it is the reality that people face once in their lifetimes and want to forget. Yet, I think this show brings that back that memory and serves it to them on a platter,” Aditi adds.

Many have disliked the show, taking to social media calling it cringe-worthy and regressive, among other things, but that doesn’t change the reality. Sima Taparia, who has been a matchmaker since 2005, finds nothing backward in her business.

“Ninety-five per cent of my clients opt for kundali matching,” says an earnest Sima. “The reason they opt for an arranged marriage for their children is that otherwise, they see how marriages fall apart at a high rate. In India anyway, 50 percent are love marriages but people mostly want arranged ones, as those marriages last long.”

No matter how much the show makes one twitch, the truth is that a large population of Indians still opt for an arranged marriage. Despite Twitter rants on the show, calling it out for promoting colourism, cast and beauty standards, Indian Matchmaking elucidates the reality of Indian household loud and clear on the screen.

And it shows that a sure change in society as regards choosing a match today is that parents don’t force their choices on their children anymore.

“I wanted to show the different ways people in India and diaspora abroad are changing and evolving the idea of arranged marriage, the push and pull between traditions and individual needs, and present it in a way of dating show. As in the west, we do not see a lot of representation of South Asian on dating shows and important for me to put us in that space,” shares the director-producer  Smriti.

Twenty-eight-year-old Akriti Aggarwal from Haryana, whose parents have been looking for a match for close to two months now, may probably fall into that ‘rejection’ category, given the mid-set of the mothers showing through already. Akriti hasn’t met many men so far, but she has already been ‘rejected’ once for being tall. “A guy’s mother rejected me for being ‘too tall’. I am 5’8” and her son is 5’11”,” adds Akriti laughing.

Author Aditi Mathur agrees that parents, be it the girl’s or the boy’s, are detail-oriented when looking for a match; however, she is shocked at the unrealistic expectations from men on the show.

“It is the men who need to take a stand but they believe that arranged marriage will grant them a girl with age-old criteria,” asserts the author. “I do not think it is the ‘Aunties’ like Sima who are at fault but the expectations men have from arranged marriages!”

Shahzeen Shivdasani, a relationship expert and the author of Love, Lust and Lemons, reckons that arranged marriages can be a good way to meet a life partner, but she is also among those highly disappointed with the show.

“The show puts a lot of emphasis on how the woman has to be making all the compromises. Shouldn’t both parties do it? At the end of the day, relationships are about equality and no one should have to give up their identity to make something work,” she argues.

According to millennial marriage coach Leena Paranjpe, couples today want to get married only in the pursuit of happiness but aren’t ready when the wedding turns into a marriage.

“They have no planning and are completely unprepared for the marriage they get into. And so while they get married in pursuit of happiness, they end up taking a divorce in that pursuit. That’s because they aren’t ready to shoulder the responsibility of the marriage and nurture it,” says Leena, whose clientele includes about 70 per cent of couples from arranged marriages seeking help.

The director of the show, Smriti, argues that while marriages are largely a patriarchal institution that can often be regressive, the setup in India is changing dramatically.

“The new generation is moulding the idea of marriage to their individual needs and even rejecting it in some cases. But it is still something that occupies a lot of space in our minds and is a fact for a lot of people, particularly Indians and South Asian people,” adds Smriti.

She maintains that we still live in a patriarchal society, the reason a lot of aspects of it need to be exposed to break free the regressive traditions. “I think we need to be honest about that aspect of our culture, so we can have honest conversations between the two generations and evolve from some of our more regressive traditions but maintain the aspects that do serve us and speak to our core values,” asserts Smriti.

Addressing the backlash Indian Matchmaking has garnered in India, the director tells that the series is based on the loosest definition of arranged marriage and is happy to see a debate being sparked among Indians.

“There is not very much discussion about caste in the show because people are evolving in those ideas and in some cases, they are not and we should know that as well. I recognise that the show is about an issue that is extremely triggering for a lot of people, as many have strong opinions about arrange marriage and the idea of matchmaking. It is a good thing that it has got strong opinions because we as a culture need to address this, talk about, and figure out where we are going to go from here. And if this show has played a small part in starting that conversation then I am happy about that,” she concludes.