2016 Year of the Stunners: Three cheers! 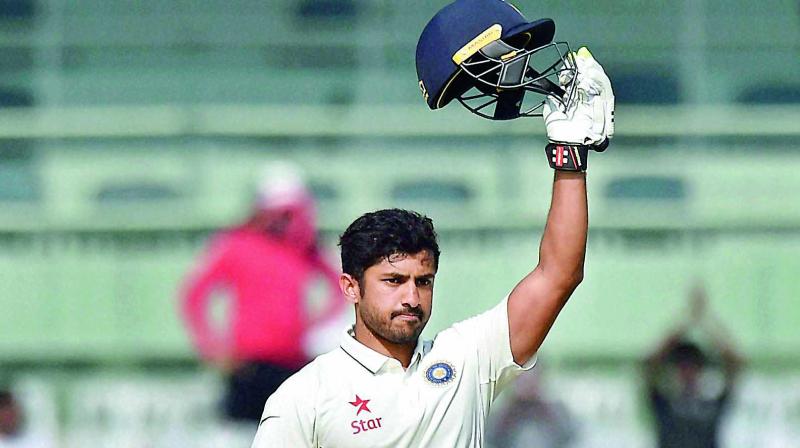 Those lucky mortals who had access to the inner sanctum of the M.A. Chidambaram Stadium on December 19, when records were being broken at breakneck speed and rewritten all by the same doer, would have had a torrid time deciphering what went into the making of Karun Nair.

The subdued expression with which he greeted the arrival of each new milestone into his fledgling Test career belied the enormity of his towering accomplishment. “There are a lot of things that occupy my head and contrary to what most people think, I do feel like savouring the occasion. But at that moment, I somehow betray the appearance of a restrained individual,” says Karun.

Almost as an afterthought, he immediately chips in and lays down the law that in order to shed his poker-faced image, he has to keep piling on more centuries, “I think I have to keep churning out big hundreds for me to be more demonstrative and until then, there is always the shower to take out my emotions.”

Considering that he was playing in his second Test alongside K.L. Rahul, someone Karun grew up with cricketing-wise, since the age of 11, it was inevitable that he was asked about the inseparable bond the duo shared. “It’s heartening to see that our careers have overlapped at the domestic level and also on the international stage. It’s disappointing for him to miss out a double hundred but I’m sure he will score many,” prophesies Karun.

Incidentally, both Karun and Rahul made their one-day debuts in the same match, on the tour of Zimbabwe, earlier this year. The iconic Sunil Gavaskar, who handed the Test cap to Karun, has spotted  traits in the Karnataka batsman to mark him out as a future star. “The influence of Rahul Dravid is too obvious to ignore. Dravid would have definitely contributed to his temperament. Karun has the combination of Rahul’s discipline and Gundappa Viswanath’s flair and strokeplay. If he keeps working on his fitness and discipline, he will be with the team for at least a decade,” the stalwart says.

Skipper Virat Kohli hasn’t tracked Karun’s domestic journey, but agrees that he is a complete package. “I haven’t seen anyone who sweeps so well in the current team. He is lethal when it comes to executing that shot,” said Kohli.

Kaladharan Nair, the patriarch of the Nair family, is filled with joy at seeing his son rack up so many records. “Seeing his passion for the game, I always encouraged him to pursue his interest since childhood. At the time, we never knew that he would reach this lofty level. I have never missed watching a match in which he’s played,” gushes the senior Nair.

One startling fact that has escaped the attention of many is that Karun likes defying not just the bowlers, but also the one thing that humans don’t have control over — death! He  had a close shave with a boating fatality while he was on a pilgrimage to Alleppey after receiving his first India call-up, and the boat he was travelling in capsised. After barely managing to swim his way to the shore, what came as a heartache was the news that his relatives weren’t as lucky.

Karun’s father also explains the soft corner his son has for his native Kerala, although, he was born in faraway Jodhpur.

“When Unni (Karun’s nickname) was born, I was working as the area manager of a tractor company in Jodhpur in Rajasthan. Soon afterwards, we moved back to Bengaluru. However, we kept our links with Kerala alive,” narrates Kaladharan. With the proud owner of a slew of enviable records in just his third Test, the puny-sized Karun could be the middle-order bulwark for years to come.

Know Karun
AGE: 25
Born in: Jodhpur, Rajasthan
Started playing cricket on streets after watching Sachin Tendulkar on TV. He used to copy his shots and style
Mother enrolled him into an academy in Koramangala (Bengaluru) when she thought it would be too dangerous for him to play on  the road
He is an ardent Manchester United fan
Loves playing table tennis with Indian teammates
He says being an athlete one has to make sacrifices and being away from family can be tough
His superstition is wearing his left pad first
Favourite movie is Chak De India
Enjoys listening to electronic dance music