A paradise waiting to be explored

The pristine river originates from the icy cold glacial springs of Hanskund, a snow-capped peak in the verdant Great Himalayan National Park. 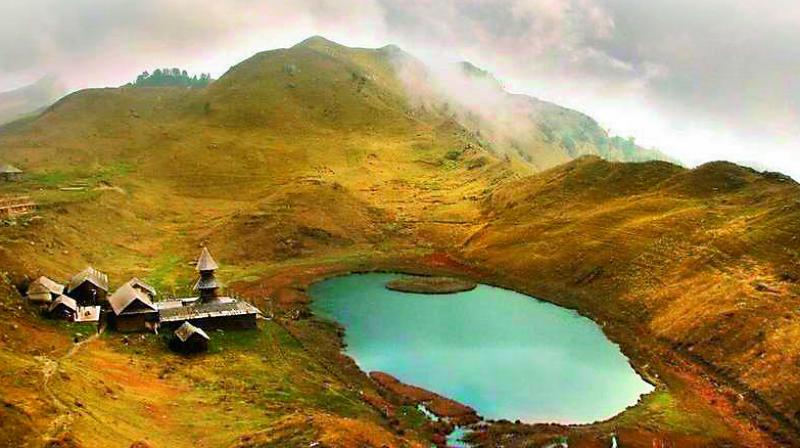 The lake is located at a height of 2730 m above sea level. With deep blue waters, the lake is held sacred to the sage Prashar and he is regarded to have meditated there.

Located in the Kullu district of Himachal Pradesh, Tirthan Valley derives its name from the Tirthan river, which winds its way through it. Tirthan is an adventure-centric getaway blessed with a wealth of nature’s treasures.  The pristine river originates from the icy cold glacial springs of Hanskund, a snow-capped peak in the verdant Great Himalayan National Park. 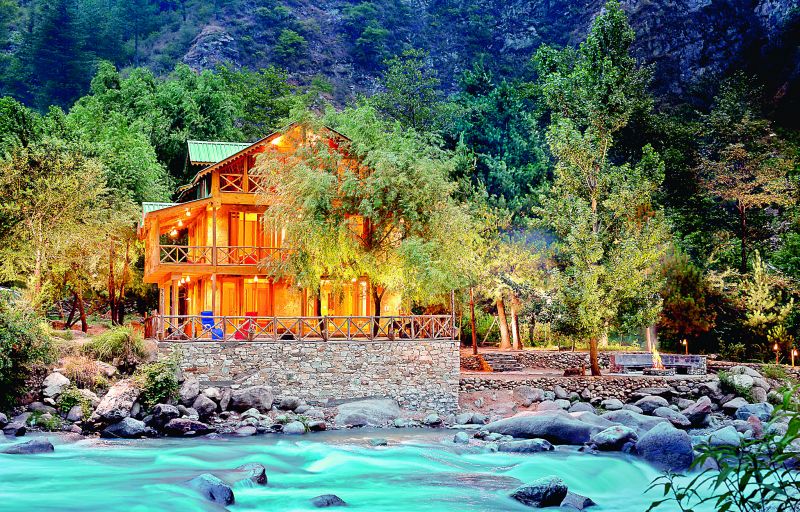 One can do a Tirthan Valley homestay, a popular mode of accommodation in this region. Homestays here offer the experience of unwinding in a lovely setting as guests come home to warm, friendly people who have opened their homes to visitors. Scattered in various parts of the Valley, they are a great introduction to the culture of the region and a great option for an extended budget stay too.

Of course, one of the must-do things in Tirthan is a trek to the Great Himalayan National Park, which is home to the snow leopard and rare pheasants like the Western Tragopan. However, the only way to see the core zone of the park is by foot. It takes four-five hours from Goshaini in Tirthan to reach the gates of the park at Kharongcha. There are several treks you can undertake - from Shilt Thatch to Rakhundi peak and Sainj Valley on the right, to Hanskund and Nada Thatch if you go straight and to Khorli Poi and Asur Baag on the left. 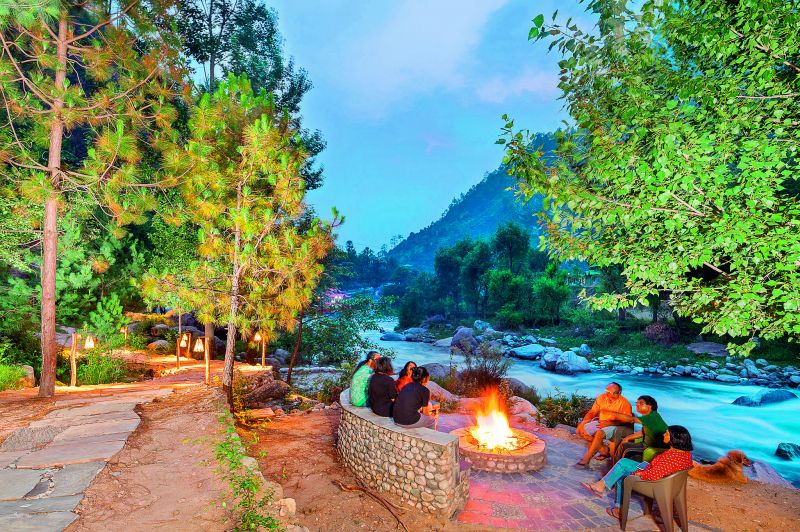 A visit to the Jalori Pass (Ragahvpur Garh / Seolsar Lake is a full day affair from Tirthan Valley) comprises of a drive and a trek by foot. Along the way, you cross the busy markets of Banjar, the quaint villages of Jibhi and Ghyagi and the magical views of Shojha. Though only 30 kilometres from Tirthan, the drive easily takes around two hours as there is a steep incline towards the Pass located at 3000 meters. From here, you can either venture into the depths of one of the biggest oak jungles towards Seolsar Lake or trek to the highs of Raghavpur Garh which has views to die for. If one has more time and you really want to experience the mountains, you can camp at Lambri Top or Sakiran Top and trek back to Tirthan from there.

From Jalori, one can visit the Raghupur Fort which welcomes you with snow-capped peaks. This picturesque site, located at approximately 3540 metres, has an old fort built by the Kulu king. The fort is surrounded by wide trenches with a small pond inside. There is a good camping ground here as well as fantastic views of the Outer Seraj valley.

On the opposite side is the Sareulsar Lake, located at about 3050 metres. This lake is tranquil and known for being the seat of local goddess Budhi Nagin. Pilgrims walk around the lake, pouring an unbroken line of ghee. Additionally, there is an abundance of effective Ayurvedic/naturopathic plants growing in the area, including Kauri, Patish, Losar, Talshi, Chunkari, Tangul and Dhupnu as you continue the trek up to Sakiran Top.

The Skirandhar ridge leading to Lambhari offers beautiful views of the Himalayas at Sakiran. There is also a beautiful temple of Rishi Shringiji.

One of the best things to do at Tirthan is to visit the Sai Ropa Tourist Centre which will roughly take about 2 hours from your local homestay. For people who don’t have time to venture into the Great Himalayan National Park, the Sai Ropa interpretation center offers a good insight!

One can also visit the Shringa Rishi temple and Chaini Kothi Temple which is a half-day hike from Tirthan. It can also be done through drive or a combination of hike and drive but this is a must-do for all travellers coming to Tirthan Valley.

The ideal way is to do it by a walk which starts from Sai Ropa. In between Banjar and Jibhi, a small walk takes us to Chehni Kothi, a towering 1500-year old castle built with stone slabs and wooden beams, and once the fortified residence of Rana Dhadhia, the erstwhile king of Kulu.

Interestingly, it used to be 15-storeys high but after the earthquake of 1905, only 10 floors remain. The ground floor has a bigger spread than the upper floors which recede a little with each level to look like a conical temple spire. It may look sturdy but given its age it is quite fragile, especially the balconies. But it sure makes for a spectacle, one that you feel great about discovering. Locals narrate that the Chehni fort even has a 400-metre escape tunnel (which is now closed) and a Krishna temple.

However, it is the Shringa Rishi temple at Bagi which is most visited for its intricate woodwork and pagoda style. Rishi Shringa is considered the patron deity of the Banjar Valley, which locals say, is his tapa bhoomi. Legend has it that he was the chief priest at the Putreshtiyajna of Raja Dasratha, a ritual for the birth of a son, after which Lord Rama was born.

Apparently, his retreat was so tranquil that sages and hermits from all over made the valley their own. As word spread, people from faraway places like Kulu, Manali and Mandi began to visit the valley along with their goats and sheep to graze. Slowly, as people realised the valley could offer them all that they needed, they began to settle in the area. The first rulers were the Maraich people, who were reputed to be over three metres in height. Later, the region came under the control of the Thakurs and then under the rule of the king of Kulu. 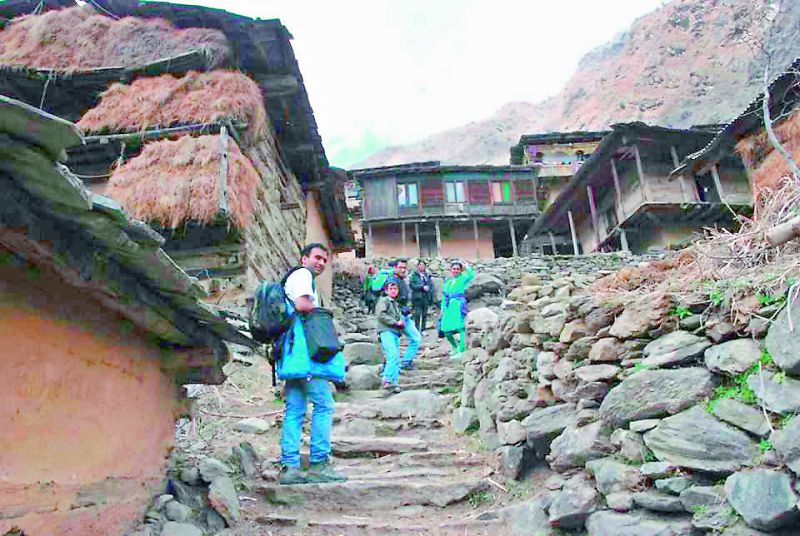 The Sainj Valley is the other part of the Great Himalayan National Park which is a must visit for the hidden treasures of Shangarh meadows. About 50 kilometers from Tirthan, one has to travel to Larji, Sainj, Neuli and Ropa to reach this beautiful treasure. Legend has it that the Shangarh meadows were made by the Pandavas to build a stairway to heaven. The Shangarh meadow is also a gateway to the UNESCO World Heritage Site of the Great Himalayan National Park. A trek from here to Lapah gets you to the Shakti Base Camp of GHNP.

For those interested in hiking, Tirthan offers a climb and camp at the Dev Kanda Ridge especially if it’s a moonlit night. One has to trek for four hours on a strenuous uphill beyond Nadar to reach the dominating ridge in the Valley. Spectacular views and an enchanting full moon overnight make the hike worth your while. The descent downhill the next day though faster, is not much easier than the climb. Still, a highly recommended hike for those so inclined.

Sarchi Village is a beautiful jewel in the entire Tirthan Valley. One can drive up a newly opened road (in 2014) to reach Sarchi. From here, you get a bird’s eye view of the entire Tirthan Valley and the Great Himalayan National Park. One can spend time in the local shrines paying homage to the village Gods. The mountain road snakes up from the bridge before Goshaini amidst flowering rhododendrons nestled between towering pine, oaks and deodars. For people who have planned a long term visit, contact local NGOs which are very active in the area for help. Volunteering with them is also one of the most productive ways to spend a memorable holiday in Tirthan.