Poised for a new challenge!

Bhopal-born Gupta has been familiarising herself with common pitfalls like exhaustion, malnutrition, frostbite, cramps, sunburn and hypothermia. 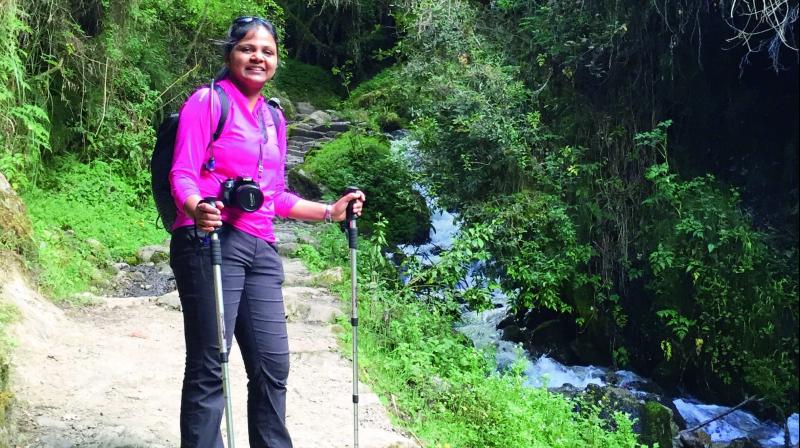 While Antarctica may not be on the ‘must visit destinations’ of most people, Purvi Gupta, an alumnus of Indian Institute of Technology (IIT) Madras is thrilled to be sailing to this coldest, driest, remotest, windiest and highest elevated continent on Earth. However, this is not a wilderness adventure or a tourist voyage. Gupta is part of a 79 women team from 13 countries to participate in a year-long programme that will culminate in a three-week field trip to Antarctica in 2018. In fact, Gupta is the only woman from India to be a part of the expedition that aims to create awareness about the low number of women in leadership positions, particularly in STEMM (Science, Technology, Engineering, Mathematics and Medicine). It is all part of a programme known as Homeward Bound, which was the brainchild of entrepreneur Fabian Dattner. The initiative originated in Tasmania, and was originally aimed at increasing the number of women in important scientific roles in Australia. However, it has now gained so much momentum that it has evolved into an international movement.

The women who come with different scientific backgrounds, from structural biology and astrophysics to geology and marine science will be given a chance to observe the effect climate change is having on Antarctica first-hand. On their ship, the MV Ushuaia, the women will discuss the latest research on climate change (focusing on Antarctica), share their work with each other, participate in leadership exercises, and strategise about how they can apply what they see to their work in the future. The aim of the journey is not only scientific, but also to create a network of women in the sciences that can support each other in changing the way leadership roles in their fields are filled.

“For me personally, an expedition to Antarctica is a dream coming true. I grew up across a number of towns across India, from Kharagpur to Lucknow to Delhi, and thereafter, studied at IIT Madras in Chennai. I somehow feel that experience made me flexible, adaptable and adventurous. Later, I worked in London and Singapore, and studied in France for my MBA degree at INSEAD. It is an ultimate symbol of global collaboration — the place which requires no visa and has been established as a zone of peace and science (as per The Antarctic Treaty meeting Kyoto 1994),” explains Gupta, who holds a degree in biotechnology engineering and is employed with McKinsey & Co, London.

The application for Homeward Bound was equally daunting and required a number of essays on leadership styles, science and engineering. In addition, every applicant had to upload a video essay explaining why they were the best candidate for the programme. The expedition is privately funded, and each of the participants is paying for their own travel and accommodation on the boat.

The education programme — Homeward Bound has five components delivered over a year, remotely prior to the voyage, on-shore in Ushuaia and on-board the ship. Last year, the team met scientists at US base, Palmer Station, to learn about the latest research in marine biology and oceanography. The learning for the outbounders will continue on the ship in the midst of icebergs, penguins, whales and women.

Despite being filled with wonder and excitement, the Antarctic is littered with crevasse fields; whiteouts; sharp-edged grooves and ridges; temperatures below -40 C and hurricane-speed winds. Bhopal-born Gupta has been familiarising herself with common pitfalls like exhaustion, malnutrition, frostbite, cramps, sunburn and hypothermia. “At the time of our expedition, it will be the Austral summer, and temperatures are around -6C to 5C. The weather can change drastically and one has to be prepared for rain, snow, fog and a high wind-chill factor. Lastly, I have to ensure all the necessary vaccinations for Argentina and any transit countries, including an up-to-date influenza vaccination. Also, there will be a doctor as well as a psychologist on board to ensure good health of all participants.” Hours on the badminton court (Gupta was the Badminton Captain for IIT Madras during her time there), long distance cycling and hiking trips will most likely see her through the grueling three weeks on the daunting island.

Apart from motivating young girls and women to pursue education, specifically in topics of science and engineering, Gupta is also an enthusiastic photographer. The DSLR camera she bought using her first salary accompanies her on all her travels. Additionally, Gupta also enjoys painting and picks up the brush as often as she can.