The President who stole the show

Croatian President Kolinda Grabar-Kitarovic, whose popularity has soared since the FIFA World Cup finals, is fun but fierce. 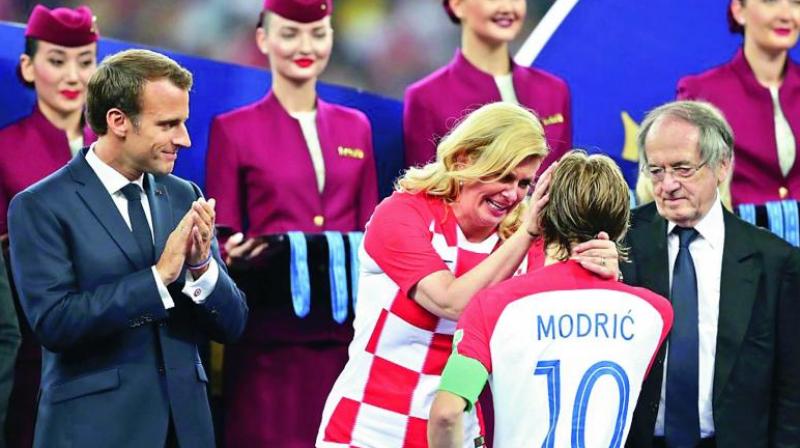 France may have bagged the FIFA World Cup on that rainy night in Russia this month, but it was Croatian President Kolinda Grabar-Kitarovic who stole the show. Dressed in a red and white team jersey, the leader was unabashedly cheering on her squad from the stands. And after Croatia lost to France, she walked out with pride and warmly hugged each and every player on the ground. It did not matter that the Head of State did not have the protection of an umbrella and was getting drenched in the rain or that her coiffured hair was all awry; her face was brimming with pride for her team that reached the finals this year.

Grabar-Kitarovic won a million hearts that day for her ‘hugplomacy’ and charm. It was obvious that she was not only the President of her country but someone who believed in the unifying power of sports. Grabar-Kitarovic followed the team in all the games after the group stage but missed the semi-final against England due to the NATO summit in Brussels. She flew from her homeland to Russia in economy class and watched the match with fans until people realised who she was and offered her a seat in the VIP area. Turns out that her love for football runs deeper than one would realise and there is a reason why she passionately cheered her team on — she played football as a young girl.

This isn’t the first time that Grabar-Kitarovic is the cynosure of all eyes. The combination of beauty and power has always ensured an interest in her. In 2016, the rumour mills began to work overtime when the photo of a buxom bikini-clad woman, believed to be of the President, was widely circulated on social media. Many were quick to express interest in moving to Croatia! But the photo was later found to be that of US model Coco Austin, wife of rapper Ice T.  Grabar-Kitarovic is also known to keep her cool in trying circumstances as a ‘wardrobe malfunction’ incident revealed. In 2015, a human rights activist Ivan Cicak was left red-faced after his trousers fell down just as he was receiving an important award from her. But did the president get ruffled? No, luckily Cicak’s dignity was saved by the fact that Grabar-Kitarovic was holding the large award in her hands, preventing anyone from getting a glimpse of his underwear.

So how did her life under the public eye begin? Grabar-Kitarovic was elected president in 2015 and was presented as the new, polished face of the conservative Croatian Democratic Union (HDZ). The party had earlier faced a slew of corruption charges over the years, the most talked about being those involving the former Prime Minister Ivo Sanader, who was involved in five overlapping corruption trials. Grabar-Kitarovic is also the first woman to be elected to office since the first multi-party elections in 1990. At 46 years of age, she is the youngest person to assume the presidency. The President has given a facelift to HDZ with her foreign education, excellent command over English and a previous high-ranking position in NATO.

To this charismatic and development-oriented leader, her country’s progress is of utmost importance. After being elected as President, she was quoted as saying, “I will not let anyone tell me that Croatia will not be prosperous and wealthy.” Prior to her election as President of Croatia, Grabar-Kitarovic held a number of governmental and diplomatic positions. Oh yes, she can hold her own against any world leader when it comes to intelligent conversation, thanks to her being a polyglot who can speak over five languages. She is fluent in Croatian, English, Spanish and Portuguese with a basic knowledge of French, Italian and German. She is married to former Presidential candidate Jakov Kitarovic since 1996 and has two children Katarina and Luka. Katarina is a 17-year-old junior national champion figure skater, an indication of how supportive the President is of sporting careers.

Grabar-Kitarovic is a beauty with a keen  mind. Take a look at her impressive qualifications. She has a Master’s degree in International Relations from the Faculty of Political Science at the University of Zagreb. She spent a semester in the US after entering a student exchange program and graduated in 1986. She is also a Fulbright Scholar who received the Luksic Fellowship for Kennedy School of Government at Harvard University and was a visiting scholar at the School of Advanced International Studies at Johns Hopkins University. And talking of powerful, she was also a part of the Forbes Power List 2017, where Forbes featured her at No. 39 on its list of powerful women.

No doubt Grabar-Kitarovic’s election is inspiring to the women of Croatia but she does not consider herself a feminist. In an interview, she said she wants equality for everyone. “I am not a feminist,” Grabar-Kitarovic told Euro News. “I am a person who just wants to see equality, equal treatment for everyone. So yes, I will push for the agenda of promoting women in business, and in political, social life and public life, but it does not mean that I want women to be advantaged in any way. I just want equal opportunities for everyone.”  Grabar-Kitarovic is also a practising Roman Catholic but still supports LGBT rights and is pro-abortion.