For an Indian kid who likes sports, Rajkumar had no interest in cricket. 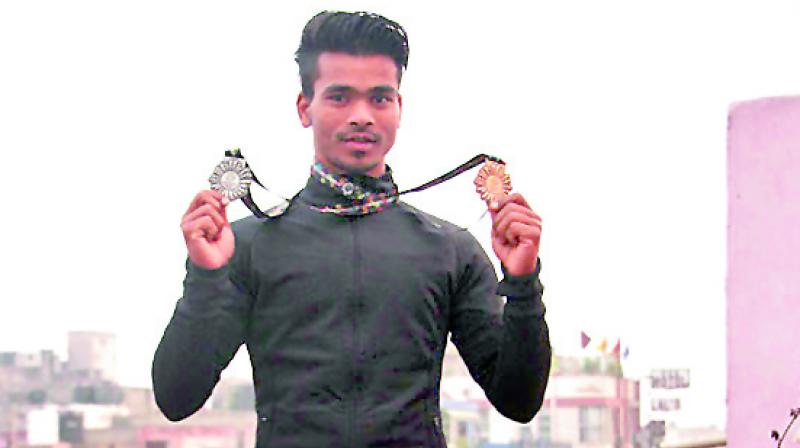 Figure skating gold medalist Rajkumar Tiwari grew up being called ‘patriwale ka beta’ (son of a street vendor) but he has continued with his ‘So, what?’ attitude and is busy chasing bigger dreams.

The lathi of a constable who was chasing away illegal street vendors hit Rajkumar Tiwari and broke his hand. The police station in-charge called the boy and expressed embarrassment. Why? Because the boy (who was helping his father, a street vendor in Sadar Bazaar in Delhi) is the first athlete to get India its first gold medal in the Special Winter Olympics in figure skating. Today, he wants to win a gold in the Winter Olympics in the normal category.

Hailing from a small village in Gorakhpur, Rajkumar, who was diagnosed with hyperactivity disorder, had to shift to Delhi for treatment. Living in the Paharganj area, his father, a street vendor didn’t have enough money to send him to a special school but fortunately they found Prabha Institute, a school-cum-NGO  that taught kids with physical and mental disorders. This is where Rajkumar’s life got a positive direction, and paved the way for his gold medal in South Korea.

He was interested in sports but kids in the village refused to play with him knowing that he can collapse any minute. This left Rajkumar feeling alienated. “In Delhi, when I saw physically-handicapped people play different games, I thought why can’t I? To think that I could now play with others filled my heart with joy,” says the 24-year-old.

For an Indian kid who likes sports, Rajkumar had no interest in cricket. He  began his sporting career playing handball and volleyball. In 2008, he got a chance to represent the state in a national-level tourney for special athletes in handball. “I got three t-shirts and two shorts that had Delhi written on them. Wearing that not only earned me respect in my locality but also gave me a sense of what being a sportsperson means,” Rajkumar says.

His good performance in the national games where Delhi won the silver medal earned him a spot in the handball team for Special Olympics World Summer Games in 2011 in Greece.

But his happiness was short-lived as the delay in getting his passport meant that Rajkumar was replaced by another player. “Everybody thought I was lying about going to Greece and so, I left everything and began supporting my father in the market because I thought if I had money, I could have gotten my passport,” he reminisces. Rajkumar grew up in a perpetual state of financial crunch and  would run errands for his landlord or take part in political rallies for some money and snacks. For the same reason, he used to do kar sewa in gurudwaras.

But as they say, life gives everyone a second chance. As his coach was shifting from the NGO-run school, he asked Rajkumar to assist him on one last tour to Srinagar. It is here that he saw snowfall and ice skating for the first time. A week later, the same coach asked if he would like to do figure skating as India was looking to send its ice skating team to Seoul for the Special Winter Olympics. It required Rajkumar to practice at Iskate in Gurgaon but the practice session would cost him Rs 450 per hour. For a person who had done only roller-skating a few times, he showed immense belief and conviction, taking the plunge. He invested all his savings in training. Though he had little coaching, Rajkumar took to ice like a duck takes to water. “I took the participation letter for Olympics to my landlord, who helped me financially. My father values money a lot but still he gave me all the money he had saved for my sister’s wedding. Even Iskate began giving him heavy discounts. I had won silver and bronze medals but
never the gold, and nobody expected me to win in the Indian contingent. But when the music played and the timer began, I knew that it was my moment and the gold that I won got India’s name on the top in figure skating. All the hard work paid off,” he says.

He even won a silver medal in the pair category. “From helping my father on the streets to eating and staying in five-star hotels in a foreign country, I have seen it all. I have seen the harsh realities of life and have also lived a dream,” he adds.

But his struggles didn’t seem to end. The prize money got spent quickly, and the series of felicitations gradually waned. Despite the gold, he had no money to carry on training. Several NGOs backed out, while letters to politicians and bureaucrats remained unanswered. While Iskate kept giving him discounts, he wasn’t getting any sponsorship to even pay the discounted price. At present, ONGC is supporting him through a scholarship. Today, he doesn’t compete in the special categories. His ailment is cured, and he is establishing himself as an able athlete in a sports that is taking baby steps in India. He won silver medal in the nationals in 2015 in the normal category. “I need to train everyday to win a medal in the Olympics and to be among the top 10 in the world. In two Asian Games that I participated, I realised we neither have facilities nor coaching of that level which other foreign players are getting. While attending a sponsored camp in the US, I saw why the country wins so many medals. I even got an offer to stay there, and represent the US, but I wanted to win it for India,” he says, proudly.

Be it the upcoming Asian Games, World Championship or the Winter Olympics, he is eyeing laurels for his country but at the same time, he knows the dream is far-fetched. “Today, I am teaching everything I know to my younger brother Manjesh, who is just 10 years old. So even if I can’t win a medal, he can or someone whom I train in the future can,” he says.