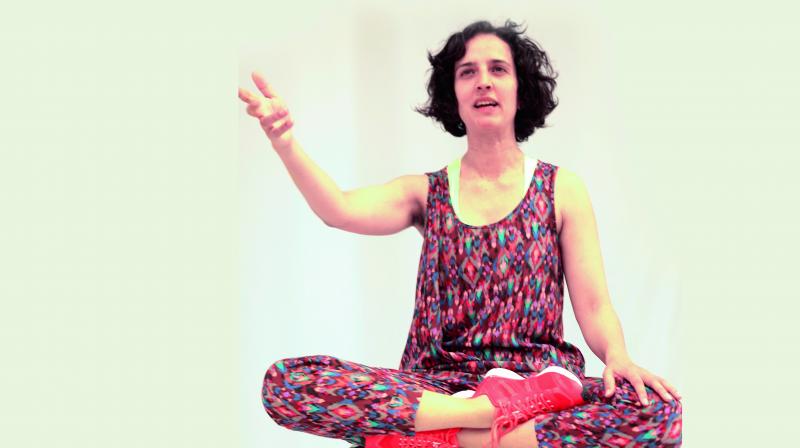 This is a huge responsibility to re-enact the works of reputed contemporary Indian dancer Padma Shri Astad Deboo. But,  his Swedish counterpart Rani Nair decided to take up this challenge after she met Deboo in Sweden in 2014. When Rani was introduced to the man by the then ambassador of Sweden, she didn’t know how famous he was. Things have progressed since that random meeting. And now, the dancer is preparing to tour with An Evening with Astad, a biographical dance of Deboo’s work and life. “I saw Astad’s show in Sweden and approached him to collaborate. Then when I performed at the Ignite Festival in Delhi in January 2015, I experimented with him on the dance floor to see if he wanted to go ahead with the collaboration. I had heard Astad’s name before but I didn’t know he was this famous. Otherwise, I wouldn’t have dared to ask him as I’d have been too intimidated,” Rani says.

Forty-three-year-old Rani was in Mumbai for a week-long rehearsal with Deboo, ahead of the show that will be premiered in Sweden in August. “Astad has had a career spanning over 50 years and we are focusing on the beginning — the 1970s and 80s — when he did a lot of experimental solo works. Historically, solo works have been important in pushing the envelope further and are more avant-garde.” “Astad is such an important figure in contemporary dance in India, in a way it’s a biography of Indian dance history,” adds Rani.

There are no recordings of these earlier works and that’s what drew Rani to these pieces. Deboo had recreated everything purely from his memory. “Some things were flashbacks and some were difficult to remember. When I look back at his body of work, it’s all gusty. Astad’s relationship with his work still feels so alive because it’s very flexible. Astad has a sense of humour, playfulness, and curiosity that is interesting.” The duo will be rehearsing in July when Deboo visits Sweden. Rani states that this collaborative effort will be an evolving piece because Deboo always has something new to add.

Rani is mindful of the fact that Deboo has been doing contemporary Indian dance about three decades longer than her. “Our aesthetics and approaches are different but I think that is interesting to bring together on stage. It’s a meeting between two different styles, regions, generations, etc.”

The Contemporary dancer has had a two-decade long career so far. A keen gymnast since her younger days, Rani learnt contemporary dance at the London Studio Centre in the mid 1990s during the South Asian Underground Music era. “I wanted to do what Talvin Singh, State of Bengal, and Nitin Sawhney were doing in music and bring it on stage.” So Rani studied  Kalaripayattu, Bharatanatyam and Mohiniyattam to understand the various movement techniques before adapting the same in a contemporary manner.

An Evening with Astad is not the first time Rani has been bequeathed with recreating an important piece of art. The dancer is renowned for Future Memory, her interpretation of Kurt Jooss-choreographed Dixit Dominus for danseuse Lilavati Häger. “I inherited Dixit Dominus in 2003. Lilavati was very proud of this dance and wanted to pass it on to someone who had knowledge of Western Contemporary and Indian dance. The piece is a second order performance — a performance about a performance,” she says. Rani admits that performing the last piece of the father of dance theatre, Kurt Jooss, for the first time was extremely unsettling for her. “One of my friends got me a little diamond ring at the premiere to encourage me. But I started to cry because not only did I have to live up to the expectations of people but also that of a diamond ring!” she laughs.

While Dixit Dominus was a legacy, Rani is glad that the project with Astad is just a collaboration. “We are making a part of history come alive, bringing out stories that were never told before.” Rani has performed Future Memory in India at the Ignite Festival in 2015 in Delhi. “I met Padmini Chettur, Preethi Athreya, and Mandeep Raikhy again when we were invited to Singapore. While in Mumbai, I went for a show by Adishakti — extremely well-performed.”