Things are hotting up between romance and tech as the future of dating is likely to involve VR dates, tech tattoos, DNA matching and robot love. 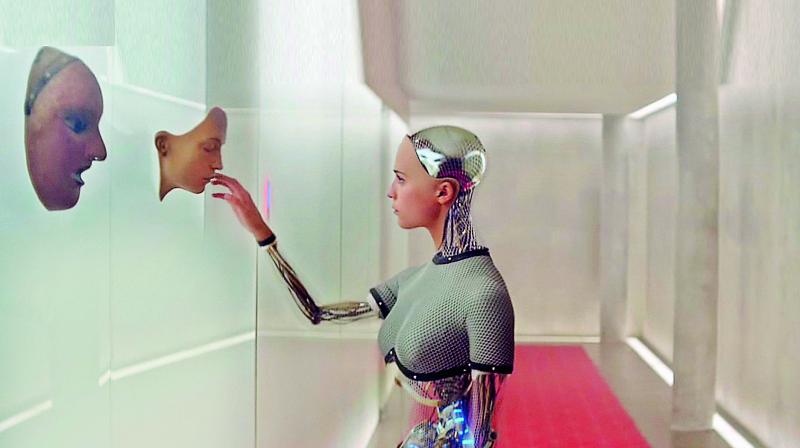 Dating (verb): A stage of romantic or sexual relationships in humans whereby two or more people meet socially, possibly as friends or with the aim of each assessing the other’s suitability as a prospective partner in a more committed intimate relationship or marriage

Imagine a technology that could tell you in real time if someone fancied you as they walked past. You could squeeze your fist if you saw someone you liked and that impulse would go straight to them. Or, flipping fidelity on its head here, the sensor could let your partner know if you held hands with someone else. By any measure, that does seem like a sea change. But the thing is, the sea is always changing, in big ways and small, from generation to generation and even year to year.

Tech-love-ogy
We are only at the dipping-toes-in-the-water stage with wearable technology and dating but investors are already looking skywards. According to reports and studies, the future of dating will involve VR dates, tech tattoos, DNA matching and robot love.

A funky shoulder pad-like wearable called Ripple sends an alert down your spine when it senses someone is hitting on you by calculating who in a room is attracted to you. “If the interest is mutual, Ripple perceives these natural reactions and amplifies the flirtatious language by moving in response to the suitor’s gaze,” the project’s site notes. The undulating sparkly tentacles would broadcast one’s excitement via sensors and computer vision technology. It remains unclear how Ripple would (or could) differentiate between wanted and unwanted attention.

French-born dating service Once seeks to match you using real-life human matchmakers and also has a heartbeat feature, which monitors your pulse response to every suggested match using your Fitbit. Each Once user receives a bespoke dating match every day at exactly 12 pm. The app then records lurches in your heartbeat and forms a chart comparison. These details indicate which people made your heart sing the loudest, enabling Once to offer you better matches in the future. 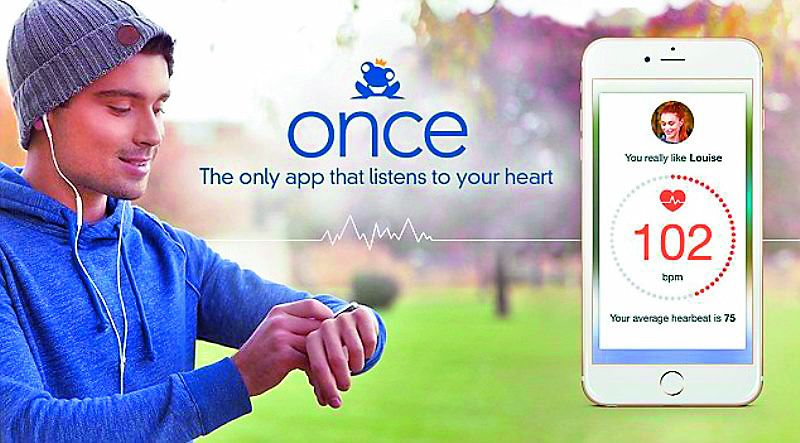 Emotion-sensing is having a bit of a moment with MIT’s Computer Science and Artificial Intelligence lab creating smartwatch tech capable of measuring audio and bio-signals to detect how you feel with 83 per cent accuracy. It’s designed to, one day, act as a social coach but the implications for connected dating are already being discussed.

Why just ‘like’ someone when you can go straight under their skin? Project Underskin is a digital tattoo concept from New Deal Design which will — in the ‘near future’ — sit under the skin. Its technology is currently wired for things like opening doors without a key — the tech would recognise a sensor in the owner’s hand so only they could use it. But it could also visualise your partner’s health, mood or feelings and even glow a loving shade of red when you and your partner hold hands.

Ideo’s concept Spirit takes this further with ingestible nanobots that replicate that fluttery feeling in your stomach when the AI system detects someone with similar personality traits nearby.

Figuring out love
Tech guru Rajiv Makhni believes the supreme quest for mankind has never been about land or money or sex, but has always been about love. “Every second of every minute of every hour of every day, mankind consciously or unconsciously seeks to find out about the idea of ‘true love’ — quotes on love, finding true love, is she/he my ideal love, long distance love, can love happen multiple times, platonic love, so on and so forth. But can we seriously ever figure out what is love? I don’t think so.”

Emotional intelligence
Rajiv feels hacking emotions or breaking EI or RI into data is terrible. “There is no accuracy, there will be no fixed results, it will be based on a someone else’s guesswork presented as fact, that’s bad. Mankind which has existed for centuries has still not figured out love, how can you expect a device to figure that out for you?” 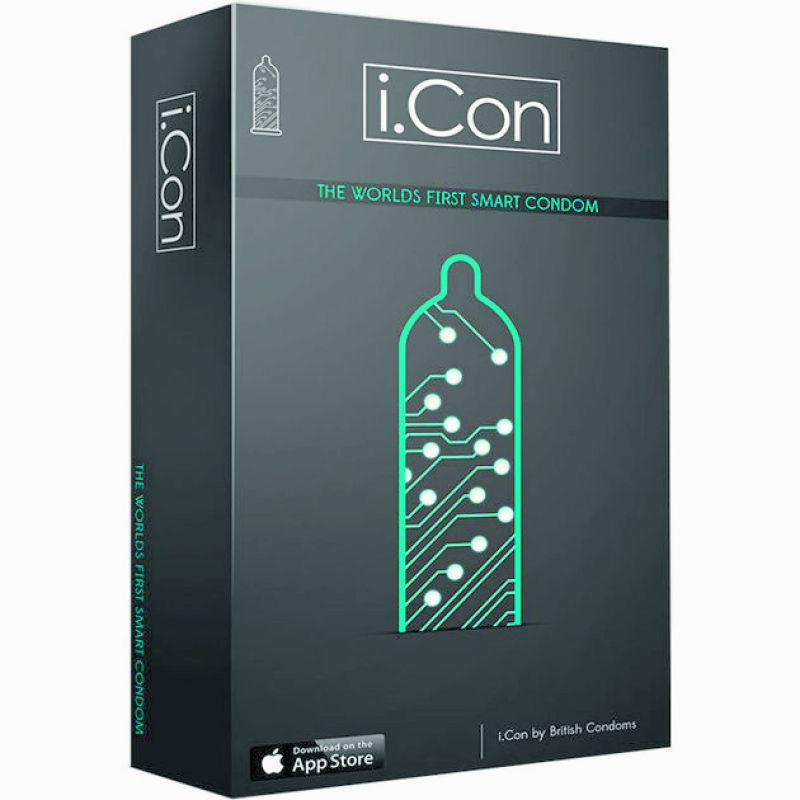 Critical about a British company called i.Con that’s accepting early-bird registrations for a sex wearable that’s being marketed as “the world’s first smart condom,” which will retail for about $74 when it launches later this year, Rajiv says, “It’s a definite stretch, considering the wearable makes no attempts to improve pleasure, prevent condom breakages and the passage of sexual diseases, or do anything else that is remotely useful. What’s the point here? Wearables have become so gimmicky.”

Portable match game
The school/college dance gave way to the singles bar which gave way to the personal ad, which gave way to the Internet which gave way to the smartphone — your handheld, in-pocket, 24-hour scanner for love. OKCupid and Match.com have always-with-you apps; Grinder and a host of other new apps trump that by swapping compatibility for geography: Who’s nearby and who’s available right now. Tinder gamified it all — dating and mating as a portable match game, with an unending succession of faces appearing on your screen, all dispatched with a swipe one way to pick the winners and a swipe the other to designate losers — and somewhere out there, your face is being swiped too. “Gamification has always been a big part of the mating mix. It’s what mid-century makeout games like spin the bottle and pass the grapefruit were about. Arm wrestling in a bar gamified which man’s fitness display will best catch the eye of a woman and so on,” says clinical psychologist Mallika Sharma, adding, “The thing is, technology is changing rapidly but human beings are not. Dating apps just let you collapse space and time in ways you couldn’t in the past. Back then, if I wanted to know if there was someone around the corner I could have sex with, I had to get up and have a look. Now I can do it all online. That’s different — a little — but only in the way that going out to a movie is different from streaming one at home.”

It can be a threat
Love in the 21st century is somewhat same and also different — mutating interestingly as we try to reconfigure it for lives led at a different speed, but its power is undiminished, its grip on our hearts as strong as ever. But there’s a note of caution that needs to be heeded, feels Nimish Dubey, tech guru and editorial mentor at a leading tech-based magazine, “I am not too sure tech and love are great bedfellows. Technology is great for communication, but that is where its role ends. After that it is really down to the human beings involved in it and how they decide to use it. My biggest concern is that tech hands jerks one hell of a weapon to misuse. In perfect conditions, yes, tech is awesome. But hey, we are in a world where FB and Twitter are messed up, and dreaming of a perfect world is not impossible. No matter which technology comes up, there is some person or company looking to ‘leverage’ it and there the problems start. Use the tech, but trust the human works best. Far too much of the tech beyond mobiles and computers have been niche and restricted to great demos. Which is why a lot of it has not really gone mainstream. I think the same is going to be the case here.”

Ripple, a sparkling, tentacled “accessory that encourages the experience of courtship in daily life,” was created at London’s Royal College of Art.

Futuristic romance
Varsha Dixit, author of several books on love and romance, is sceptical about the whole tech meeting love angle. “Love is associated with serendipity. It happens through chance. People fall in love at first sight, but it takes a lot of commitment for love to blossom. There are many moments when one might come across a love interest but the person may not realise what they are feeling. If you ask me to imagine if there was a device that could interpret my emotions and inform me that what I am feeling is a romantic emotion, and that device would be able to measure my emotional response when I see or meet someone and inform me how I really feel about them based on various data points, I don’t know what I’d say,” she says, adding, “Futuristic romance done through devices could be a fad but I feel it won’t last long. Just like it happens in an arranged marriage or speed dating, devices might help you find a shorter path to your mate but making the relationship work will still be the people’s responsibility and no device can help you with that. When there are humans involved, you have to leave room for human error. Would reliance on this device allow the person to find the perfect partner or confuse them every time they feel attracted to someone? Would this device reduce the chances of heartbreak because the decision to pursue a relationship was made on the basis of tangible data rather than gut instinct? I’ll leave it up to you to think over this.”