Artist Thota Vaikuntam talks about his journey as an artist, his influences and his love for where he comes from! 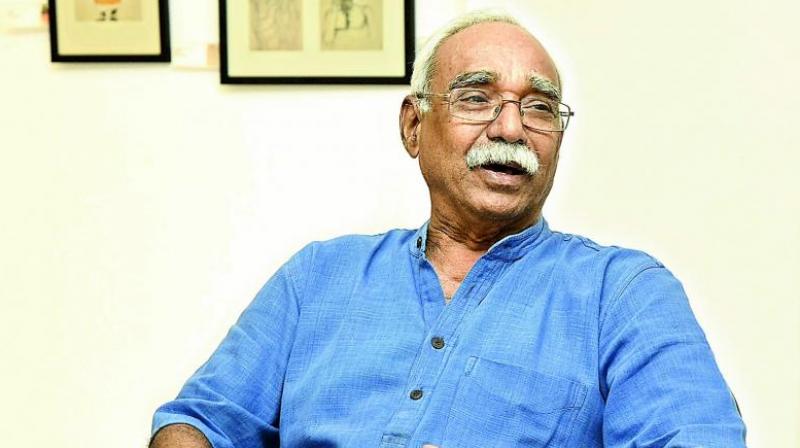 It was a pen gifted to him at the tender age of nine by the district collector for winning an art competition in his village, that sparked in Thota Vaikuntam his passion for art. The nationally-renowned artist, recognised for his bright and rustic paintings of Telangana women, Vaikuntam’s rarely seen artworks were recently showcased at one of Hyderabad’s leading art galleries — Kalakriti Art Gallery. Apart from his early charcoal and pencil sketches, the exhibition also unveiled figurines of Telangana woman sculpted by the London foundry.

Hailing from Boorugupalli, a small yet culturally vibrant hamlet in Telangana,  Vaikuntham had a natural knack for painting portraits. Encouraged by his peers, parents, and townspeople, the artist always drew portraits and paintings of superstars at the request of fans. However, he did not consider art as a career option until a friend suggested that they should travel to Hyderabad and check out the fine arts college there. “I come from a small family of traders. My father did not really have the kind of money to support my stay in a city like Hyderabad and fund my fine arts career, so I did not put much thought into the idea initially. However, after my matriculation, I did not find any other career option that interested me. So my family decided to send me to Hyderabad and did their best to support me financially,” the artist recalls. 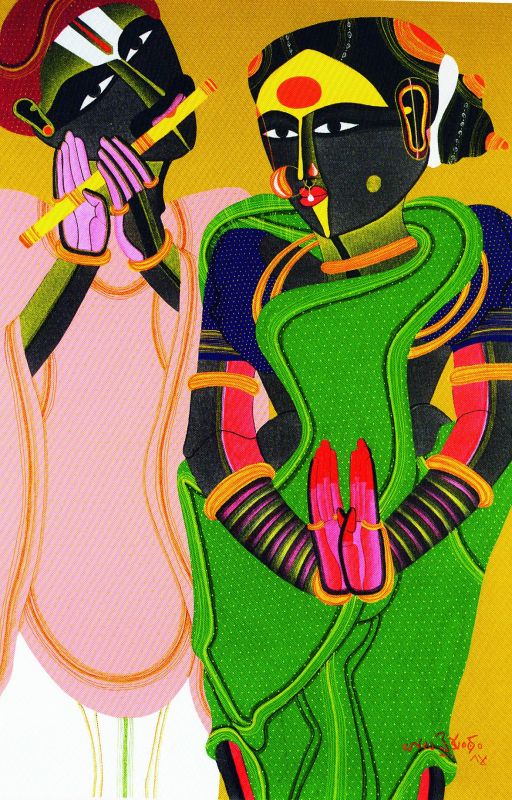 The artist spent his childhood days taking inspiration from calendar art, street plays, and village theatre. The vibrant and starkly painted backdrops of these theatre performances have greatly influenced his artwork, textures, and colour palette. However, his years at the Hyderabad’s College of Fine Arts and Architecture strengthened his resolve to become an artist instead of trudging down the usual path of becoming an art teacher or professor. Reminiscing about his time at the college, he said, “In the first couple of years, we would travel to the old city, find a chai bandi, order tea and biscuits, and sketch almost anything that caught our sight. We’d do this for days in a row. I’d tag along with seniors and we’d have intense conversations about European artists. French artists were in vogue at the time. We’d discuss the nuances of Expressionism, Impressionism, European artists, and their muses.” 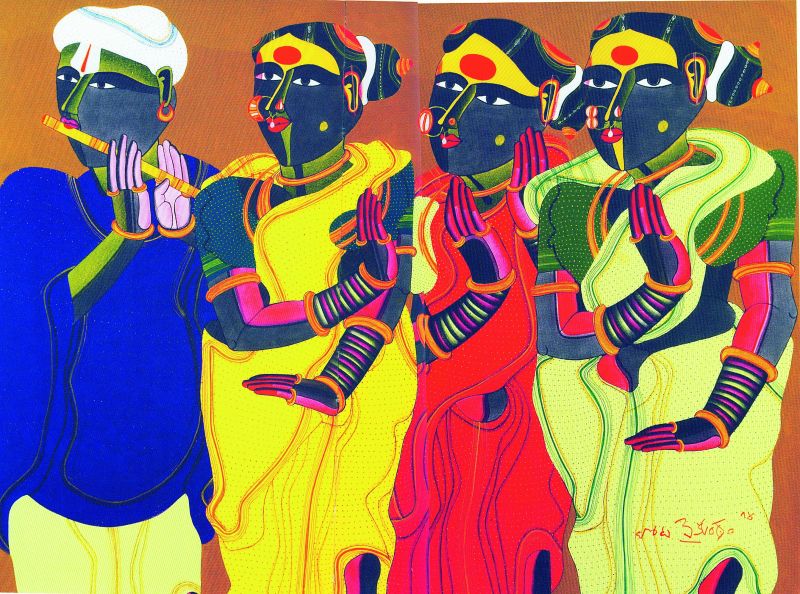 Vaikuntam pursued his Master’s degree in Fine Arts in Baroda where, under the guidance of the eminent artist-teacher K. G. Subramaniam, his outlook, towards the kind of art he was practicing, changed. In Baroda, he discovered a massive paradigm shift. Instead of discussing European artists and their works, he became part of discussions that concentrated on Indian artists, their work, a lack of originality and how European art heavily influenced Indian artists.

The nationally-renowned artist, recognised for his bright and rustic paintings of Telangana women, Thota Vaikuntam’s rarely seen artworks were recently showcased in Hyderabad’s. Apart from his early charcoal and pencil sketches, the exhibition also unveiled figurines of Telangana woman sculpted by the London foundry.

“I remember this one discussion where we were talking about Raja Ravi Verma. He was considered to be one of the most revered Indian artists. And yet, the group went on to critically look at how his painting techniques were very European while his subjects were Indian. This environment opened up a completely new world in my mind.”

It was after his stay in Baroda that the artist claims that he started looking for fresh inspiration in popular folk art and their performers. “Once I came back to Hyderabad, I started doing what you’d call commercial art. I realised that I had to earn a living from art and that as an artist, I might not always get to choose what I wanted to do. I’d paint portraits, even paint walls if required. However, I reserved my evenings and nights to paint for myself. I would paint what I liked, and I drew inspiration from my native village.”

During his initial days, the artist worked primarily with charcoal and pencil. However, once he realised that people were shifting away from black and white, he bombarded his canvases with the bright colours that adorned the women of his village. As Professor Anand Gadapa mentions in the artist’s retrospective collection — Bhaavanaatharnagam — about his initial charcoal and pencil collection, he writes, “These are the more convincing and stunning artworks ever produced by the artist in his artistic voyage. His later artworks seem to assert the regional, ethnic identity with a sort of undertoned articulation, which has now become even more convoluted and vivacious within his comprehensive chic of picture making.”

While sketching his village people, especially the women of Boorugupalli, was something he did to stay in touch with his roots, it eventually became his signature — an identification for his artwork. While the shift was not deliberate, Telangana women became synonymous with Thota Vaikuntham.

As the conversation comes to a close, the revered artist says, “If there is something that legitimately makes me upset, it is that in the name of modernisation, our roots, culture, and villages are being demolished. The village that I drew inspiration from no longer exists. The different workers and traders sitting in a common bazaar at their designated places — the weavers, the goldsmiths, the flower sellers — all provided a dynamic and rich visual aesthetic that I do not come across anymore.”