A Partnership Council set up under a Strategic Partnership Agreement signed in 2011 held its second meeting in Delhi in September this year. 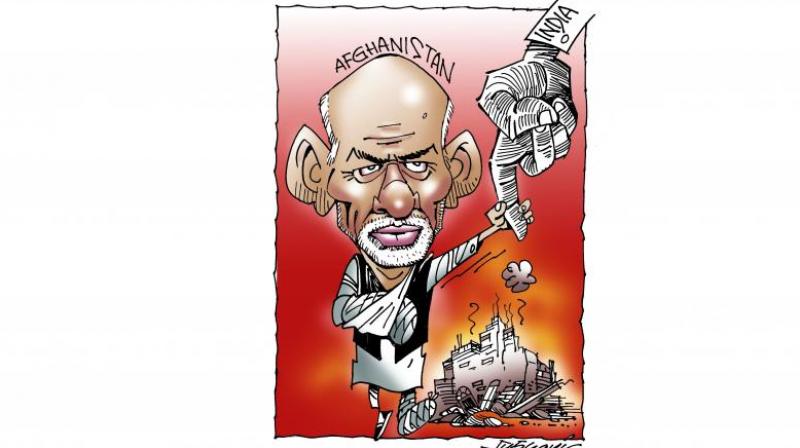 India’s development projects in Afghanistan valued at US$ 2bn at Indian costs have played a key part in this.

For a country that has been in almost continuous turmoil for the last 40 years, and one in the vortex of regional and great power politics since the Soviet military intervention in Afghanistan in 1979, the India-Afghanistan relationship has, somewhat contrary to trends in India’s relationship with many of its other neighbours, grown steadily over the last 16 years of democratic post-Taliban rule to become one of its strongest relationships in the region.

In the process, it has transformed a deep historical relationship in which India was frequently a target of military raids, campaigns and conquest but also a seminal partner in trade and civilizational exchanges, into a strategic partnership that enjoys national consensus in both countries and has expanded to include sensitive areas like defence and intelligence sharing.

As we turn the year, the relationship has become stronger than ever from the level of the leadership to that of people, cemented by India’s extraordinarily successful development partnership, scholarships for Afghan students in Indian universities, medical treatment and recreation in India, participation of Afghanistan’s increasingly successful cricketers in the Indian Premier League, the popularity of Bollywood in Afghanistan, and strategic breakthroughs in connectivity through the Iranian port of Chahbahar and an air corridor for Afghan products for the Indian market.

A Partnership Council set up under a Strategic Partnership Agreement signed in 2011 held its second meeting in Delhi in September this year.

In addition, from a country that was once viewed somewhat warily in the West as providing the rationale for Pakistan’s obsessive interference and sponsorship of terrorism in Afghanistan, the new US policy for Afghanistan and South Asia unveiled by US President Trump in August 2017, publicly acknowledged India as a force for peace and development in Afghanistan while bluntly identifying Pakistan as the source of terrorism and instability (del: in Afghanistan).

India’s development projects in Afghanistan valued at US$ 2bn at Indian costs have played a key part in this. Few countries, including larger donors like the US, EU or Japan, can boast of a well distributed development portfolio spanning crucial infrastructure directly, as Indian can. Like the Pul-e-Khumri-Kabul power transmission line in the north, the 218 km Zaranj-Delaram road to the Iran border and eventually Chahbahar port in the south, and the Salma Dam in the west, institution-building as in the new Afghan parliament and government capacity building through ITEC, education and training including the Afghanistan National Science and Technology University in Kandahar and over 2000 per year under ICCR, ITEC and ICAR scholarships, and small development projects benefiting local communities in far flung border areas especially eastern Afghanistan.

These have yielded huge political dividends. Afghan leaders have frequently described Indian assistance to Afghanistan as far greater than the figures in terms of value for money, both financially and emotionally. For the Afghan people too, they are symbols of India’s goodwill and friendship that contrast starkly with Pakistan’s destructive role in Afghanistan. These achievements are now being extended through a new generation of projects under an additional US$ 1 b outlay announced by Prime Minister Modi covering drinking water and other projects crucial to Afghans, and trade infrastructure and promotion initiatives that will give Afghanistan greater access to the Indian market partially overcoming Pakistan’s barriers to transit trade through its territory.

Looking ahead, these developments should also open up possibilities for Indian companies to invest in and develop Afghanistan’s natural resources in a mutually beneficial partnership that will add value, generate employment, and develop industries inhibited so far because of lack of transport routes and infrastructure, and catalyze a virtuous cycle of investment and growth.

These prospects of course depend entirely on political and security developments in Afghanistan likely in the coming years.  2017 was a difficult year for Afghanistan from a security point of view with several high profile attacks by the Taliban and IS-K (Daesh) against government, security, civilian and religious targets through the year including the National Assembly, Supreme Court, police, Shia mosques, Embassies and even hospitals. According to most assessments, Taliban and Daesh now control over approximately 45 per cent of the country.

These headline stories and figures, however, mask the considerable progress that Afghanistan has made over the last 15 years in terms of GDP growth, life expectancy, poverty reduction, education, health, especially maternal and child mortality, infrastructure and media freedom. Democracy and international assistance have enabled a bright new generation aspiring to build a new Afghanistan free from terror and war-lordism.

Yet, more challenging than the security situation where the security forces have been able to hold their own where it has really counted, beating back attacks on cities and most district headquarters, it is the political challenges that the Ashraf Ghani-Abdullah government is likely to face in 2018 that should be a cause of concern.

While President Ghani has brought in a much-needed focus on governance, development and reforms that are supported by the West and those seeking a change from past forms of politics, they have also taken Afghanistan into dangerous political territory where powerful ethnic leaders like Vice President Abdul Rashid Dostum and the governor of Balkh province, Atta Mohd. Noor have been alienated and humiliated and are now in open revolt. Dostum is in exile in Turkey chafing against criminal charges against him and plotting his return; while Noor’s recent dismissal by President Ghani has invited a defiant refusal to leave and a public outburst against Abdullah, exposing internal fissures within the Jamiat. Political behaviour and discourse have taken an ugly turn raising the spectre of a return to the political violence of the early 1990s.

Former President Hamid Karzai too thrown a challenge by calling for a loya jirga or grand council of elders to question President Trump’s military strategy for Afghanistan. Electoral reforms and parliamentary elections overdue by two years, and promised for July next year, do not appear anywhere realistically in sight inviting public demonstrations and threats by the opposition.

In addition, the return of Hizb-e-Islami leader Gulbuddin Hekmatyar from Pakistan has altered and fractured the political balance and space in Afghanistan based on a tacit compact between a Pashtun President and the mainly Tajik-based Jamiat. With the Hizb-e-Islami back and on his side, President Ghani seems emboldened to pursue his reform agenda at the expense of ethnic leaders who still command vast ethnic and tribal loyalties. While admirable, these developments have the potential to put the post-Taliban compact and consensus under severe stress. India’s standing in Afghanistan today owes much to its success in enlarging its support for the Northern Alliance during the struggle against the Taliban to an ecumenical support for Afghanistan as a whole, irrespective of ethnicity. Today, it is one of the few countries acceptable to all. If this consensus breaks down, Indian diplomacy is likely to be put to test. Unlike in 2014 when the US intervened in the Presidential elections to cobble a compromise power sharing government with both contenders, the US now does not seem to be interested in getting involved in domestic politics.

Can India take the lead in rallying as many of Afghanistan’s well wishers and domestic constituency together to preserve the post-Bonn consensus?