Demo, GST no downer, India in a sweet spot

With both domestic and global economy showing signs of recovery, hopes have sprung anew that 2018 augers well for the country. 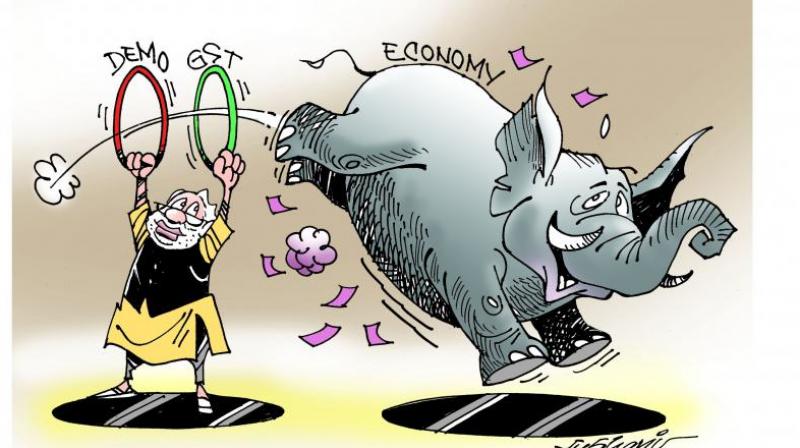 To conclude, India is in a sweet spot today and investor confidence is growing.

We step into the New Year amidst indications that the global economy is in a much better shape than in the past. The US economy is showing a turnaround in growth and the Euro area is witnessing broad-based recovery. Besides, the Japanese economy is indicating early signs of economic growth while most developed and many emerging economies have witnessed an upswing in economic activity. All this bodes well for the sustainable and moderately higher growth of the world economy in 2018.

On the domestic front, the Indian economy is showing nascent signs of recovery having shrugged off the economic disruptions caused by demonetisation and GST implementation.  GDP growth has quickened to 6.3 per cent during July-September 2017-18 from the uninspiring performance in the previous quarter. Several sectors have exhibited a recovery in growth following the slowdown around the initial period of the implementation of GST. Presently, much of the uncertainty generated by the introduction of GST has settled down even though some issues remain to be resolved. At the same time, benign inflation, robust foreign investment flows, booming stock markets, burgeoning foreign exchange reserves and stable macro-economic conditions have ignited confidence among investors that the recovery process would firm up in 2018.

With both domestic and global economy showing signs of recovery, hopes have sprung anew that 2018 augers well for the country. There are expectations that the Indian economy would continue to show an improved performance as our inherent strengths and the proactive policy environment have spawned new growth opportunities. It is anticipated that India would return to emerge as a bright spot in the prevailing world order with GDP growth likely to accelerate to 7.5-8.0 per cent in 2018 from a projected 6.7 per cent in 2017.

In this context, the government’s recent move to unravel a slew of incentives to facilitate investment activity, such as the announcement of enhancing public expenditure on infrastructure, boosting private investments and addressing the problem of delayed payments to the MSME sector is noteworthy. Besides, the much-awaited government decision to recapitalise Public Sector Banks (PSBs) would go a long way to revive bank lending and facilitate job creation.

Taken together with the recently passed Insolvency and Bankruptcy Code, and the move towards speedy resolution of NPAs, bank should resume the lending operations and pave the way for private investment revival. Further, the Government has launched significant programmes at the national level aimed at enhancing public expenditure on roads and highways in a strategic manner including port connectivity and border and cross-border roads will have a big multiplier impact on economic growth.

What is more, the implementation of GST is an outstanding reform which has been successfully implemented in 130 countries which is set to transform the economic landscape of the country. The government is also supporting new initiatives, focused on administrative efficiency and ease of doing business which would stimulate private investment, going forward. India has achieved a quantum leap in its rank on the World Bank Doing Business Report 2018 from 130 to 100. The latest report validates the commitment of the government to fast-tracking economic reforms, addressing red tape and facilitating business, which it has undertaken in mission mode over the last three years.

Going forward, the manufacturing sector needs to gather momentum for fostering growth with inclusion. The salience of manufacturing in GDP needs to go up from 25 per cent by 2020 to augment growth and create jobs.  A boost to labour intensive sectors including services would do much to aid job creation.

In the last three years, the share of manufacturing has improved and this is primarily due to the ‘Make in India’ initiative. But we are much behind our neighbouring countries such as Thailand, China, the Philippines and Indonesia. We have to do a lot of catching up. A lot more action is required from both the Centre and the States to facilitate ease of doing business and also to persuade the state governments to resolve issues relating to land and labour.

At the macro-level, there are administrative reforms that require attention. Some such reform measures include privatisation of state owned companies, bringing down stake in public sector banks, corporatisation of railways, rationalization of taxation, among others.

To conclude, India is in a sweet spot today and investor confidence is growing. All this portends well for 2018. We are optimistic about private investment reviving which would set the path for improved growth in the coming year.