Lessons from China: Economy for dummies

By 1978, after the death of Mao, it was an economy going nowhere with a bloated population and great poverty. 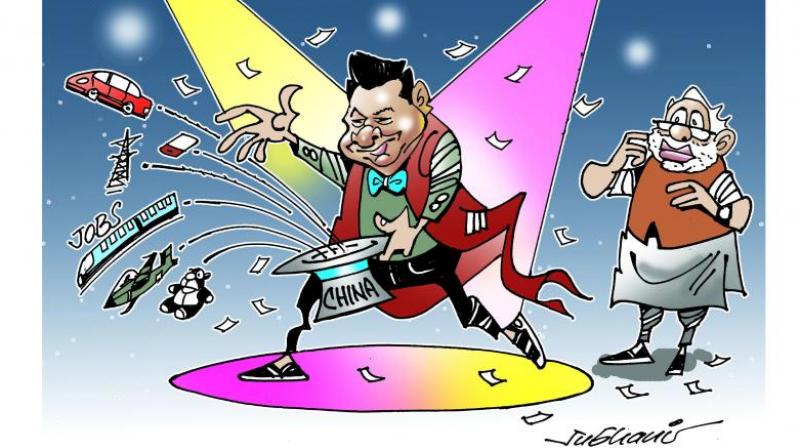 India did not invest adequately in infrastructure, only 4.7 per cent of GDP where the need was 6.5 per cent.

In 1950 both China and India were rebuilding their economies after a long period of war and unrest. Both independent, one Communist and the other Democratic. India was in much better shape, the largest economy in Asia, with a relatively sophisticated economic system. China went its own way plunging into the chaotic and destructive Cultural Revolution and the Great Leap Forward.

By 1978, after the death of Mao, it was an economy going nowhere with a bloated population and great poverty. India had turned its back on its long history of capitalism and adopted a Socialist economic model with State Control. It grew only around 3.5 per cent per year, with a population growing at 2.5 per cent unable to tackle its challenges while it watched the miracle growth of Japan, Germany and South East Asia. With government control, increasing corruption and increasing civil dissatisfaction, it too was going nowhere.

In 1978 China opened up inviting foreign capital, promoting its coastal areas for investment, freeing  agriculture from state control, introducing a One Child Policy  and investing in infrastructure. Today it is a $12.5 Tr economy, the second largest in the world and at $22.5 Tr in PPP the largest economy. India opened up in 1991 after an economic crisis, grew impressively in $ terms at 8.8 per cent per annum and is today a $2.5Tr economy, way behind China.

What are the lessons from China’s growth for India?

China first focused on investment in labour intensive industries to create jobs for its huge labour force, in textiles, garments, toys, light engineering and assembly, electronics etc. it created special economic zones, whole districts next to the coast with different laws for business. The massive increase in employment created the resources from increased consumption and taxes to invest in infrastructure. It enabled the growth of large firms which could invest. It’s banks lent freely to state owned enterprises too. China had a decentralised economic model where the Provinces made many economic decisions, granted incentives, marketed themselves and nurtured industries with almost no red tape. The key target was job creation. China invested massively in skill development and in her Universities. It created very many new cities, promoted urbanisation and benefited immensely.

China soon attracted over $1.5Tr of FDI becoming the factory of the world, the largest global importer and exporter and through mercantilist policies created a foreign currency kitty of over $4Tr and managed its currency to keep its advantage. It used a sophisticated supply chain through Hong Kong to dominate global trade. It shifted over 400 m people from the land to the city and factories. It now boasts of some of the most sophisticated industries.

India did not invest adequately in infrastructure, only 4.7 per cent of GDP where the need was 6.5 per cent. China over invested at 8.7 per cent while it needed only 6.5 per cent. As a result India’s supply chain costs are at 14 per cent of GDP creating a high cost uncompetitive economy while China is at 6 per cent creating a competitive low cost economy. The recent GST will remedy it somewhat but huge investment in infrastructure is needed. India did not invest in her cities, discouraged urban planning depriving her cities of autonomy and good governance creating an urban crisis. It championed the romantic notion of rural villages, failing to understand that rapid urbanisation was the future.

The lessons for India are very clear. Incentivise and increase investment in labour intensive  industries to create more jobs. Remove restrictive labour regulations to increase job creation. Allow firms to grow faster in all areas by dereserving goods for MSME and making them grow bigger. Reduce corporate taxes to 25 per cent for all to increase internal generation of resources and reduce capital intensity by reducing depreciation rates. Incentivise job creation by special tax breaks. Increase investment in infrastructure to at least 6.5 per cent of GDP, release investment resources  by divestment in State owned mature infrastructure assets.

Improve productivity of ports, reduce power theft, improve speed on highways and in railways and reduce the cost of doing business by removing unnecessary regulations. Keep a level-playing field between Indian business and FDI. Allow investment in educatation by the private sector to improve skills and human capital, grant full autonomy to the top 200 universities to increase innovation. Above all, invest in her cities including in new cities to promote rapid urbanisation which could enable delivery of civic services to improve quality of life, give freedom to cities and towns to govern themselves and create new jobs.

China has many lessons for us. Their companies will dominate the world in future. India should learn from the Chinese success as it is the only country with a 1.3b+ population which started off in 1950 with a similar economic and social structure and succeeded in dominating the world.