Books   01 Sep 2019  Who were the three guardian angels in Anupam Kher’s life?
Books

Who were the three guardian angels in Anupam Kher’s life? 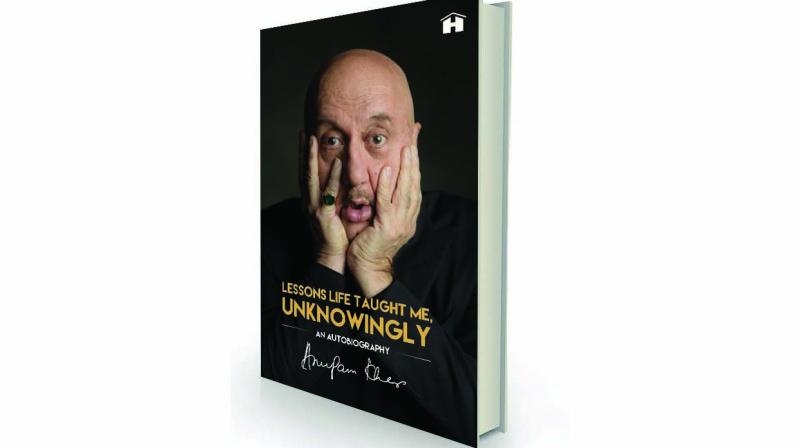 After being taught and trained by Balwant Gargi and Amal Allana, my natural progression was to move on to National School of Drama (NSD), New Delhi. This time I gained admission. In Delhi, I discovered that theatre was at a crossroads. The 1960s had marked the heyday of theatre in the nation’s capital. The nation entered a state of turmoil in 1974-1975. Prime Minister Indira Gandhi imposed internal Emergency on 25 June 1975, which lasted till end-March 1977.

I was very excited about learning. I was learning make-up from Indudada, yoga from Sharmaji, modern Indian drama from Nemichandra Jain. We had Mohantydada as our music teacher. Rita Kothari was our movement teacher. Nibha Khanna was our classical Indian drama teacher. And, there was the great, the one and only, E. Alkazi himself. My seniors were the likes of Pankaj Kapoor, K.K. Raina, Naseeruddin Shah, Raj and Nadira Babbar, Ranjit Kapoor, Anil Chaudhary, Om Shivpuri and Om Puri, to name just a few from the long and illustrious list. We were exposed to performances at Kamani Auditorium, Shri Ram Centre, Little Theatre Group auditorium and Triveni Kala Sangam. There were two other aspects to my life in Delhi that were running on parallel tracks. One was the stay in the hostel of Vakil Lane, next to Bengali market. Life was full. Something in this ‘full life’ was taking over, which was to consume me later. Once again, I had fallen in love! At the NSD, there was this girl who entered my life and fell in love with me.

Here I am reminded of a very interesting incident from those days. Because of my emotional state of mind, I had not been able to submit my western drama project on Pier Gynt, the five-act play in verse by the Norwegian playwright Henrik Ibsen. Alkazi, always somewhat dramatic by nature, said to me: “If tomorrow, by 2 o’ clock you don't submit your project, then you're out of the school! Don't even waste your energy in coming here... just leave the school at 1.45.”

Given my frazzled nerves, I could not finish the project. So, I wished my class fellows goodbye with the words: “It was great being with you... goodbye friends... I will be leaving today as I have been asked to leave the school.”

However, one of them cautioned me (I believe it was Satish Kaushik): “I suggest you attend Mr Alkazi’s class and tell him personally. After all, he has been your teacher for so long.”

Often, if he wanted to make a statement, Alkazi would come to the class in a put on bad mood which put the fear of God in all of us. He said: “Okay. So, let me ask you one final time. How many of you students have completed the western drama project?” Out of fear, I could not say anything, so I just kept quiet. He said: “Let me check with each one of you. Suhas Khandke, have you done the project?”

He didn't say anything to me. The class continued. I finished the project that night with the help of Satish Kaushik. I imagine that I had successfully slipped something by my ‘guru’.

Many years later, while I was shooting for a film in Pahalgam in Kashmir, I learnt that Alkazi was also holidaying there. I decided to meet him. By this time, he had quit the NSD and theatre for good. And I was a recognised actor in my own right. On meeting me, he said: “Well done, Anupam. Very good. I am very proud of you. I saw your film Saaransh in the Regal Theatre... it’s a very good film. And you were very good... brilliant. I’m glad... By the way, I am planning to go for a picnic why don’t you join me?”

For me, going for a picnic with Alkazi was like going to the moon with Neil Armstrong. I said yes without any hesitation. We went to the riverside and found a quiet corner where he had some cold beer bottles. I used to hardly drink at that time, and even today, I am more of a ‘social drinker’, but that afternoon, I was very happy about the fact that I was actually having drinks with my teacher whom I adored, admired and revered like God. After a glass-and-a-half of beer inside me, I said: “Sir, I have been wanting to tell you something for a very long time and, I think, today is the day to say so. You remember the incident about that class project on western drama, which I couldn't do on time? Well sir, when you were checking who all had completed it, I was able to trick you. Because that day, you had questioned each one of us about who had done the assignment and while all others said, ‘I have done it. sir...’”

Alkazi interrupted and said: “You said, ‘I will do it...’” He looked at me and said with a light smile: “Anupam, what makes you think I did not notice it? I remember you said, “I will do it sir”. But, if I had pointed it out and stopped there, you would’ve not been sitting here and sharing a beer with me now.”

That was the magnanimous Alkazi, who through his sharp and crisp memory remembered a minor incident like this even decades later.

I count as one of my singular achievements to be the chairperson of both these institutes — National School of Drama and the Film and Television Institute of India.

I allow myself the luxury to say it myself, but I did the most unbelievable work at the NSD. It was the high point of my life. An appallingly poor student in academics, who barely made it through school but then went on to outdo himself, first at the Department of Indian Theatre at Panjab University in Chandigarh and later, in National School of Drama, the country’s highest and most prestigious institute of theatre, I had conquered the world.

I would be failing in my duty if I did not mention the three hands... the three guardian angels of my life — my drama teachers who guided me, groomed me and moulded me in my self-discovery as an actor. Each one taught me lessons that have stood me in good stead. The first, as you may have guessed, was Balwant Gargi, who opened my eyes so that I could appreciate the magnificence of theatre and life. The next was Amal Allana who taught me how to bring to life on stage the characters from the page of a book. And, finally, the one and only, the NSD director, reputedly the ‘king of Indian theatre’: His Excellency Mr Ebrahim Alkazi. He taught me that the grander your vision, the larger will your world be! And the deeper you feel from your heart, the more humanity you will exude!

In June 1978, my education at the National School of Drama came to an end.

Excerpted from the chapter titled ‘Graduating in Theatre’, with permission from the publishers, PenguinRandomHouse