A timely warning about fascism to a tottering world

The fascist takeover of her native Czechoslovakia forced her to flee with her parents. 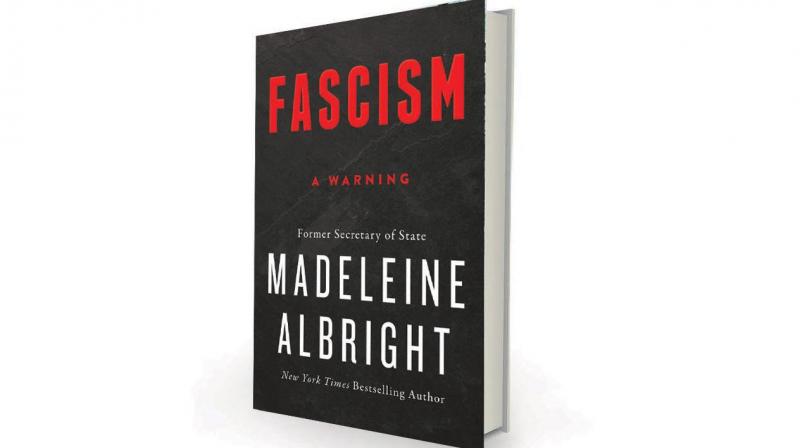 It is not difficult to see why this book has been on the New York Times’ bestseller list since it hit the stands earlier this year. Not only is it utterly relevant to our times but is also a surprisingly good read: history written with unusual flair and a lifetime of experience in the theory and practice of statecraft.

This is former secretary of state of the United States, Madeline Albright, at her brilliant best, highlighting the threat of fascism that continues to threaten democracies around the globe. For her, fascism is not mere history or a concept. She writes of how she has suffered its consequences: “On the day fascists first altered the direction of my life, I had barely mastered the art of walking. The date was March 15, 1939. Battalions of German storm troopers invaded my native Czechoslovakia, escorted Adolf Hitler to Prague Castle, and pushed Europe to the threshold of a Second World War.”

The fascist takeover of her native Czechoslovakia forced her to flee with her parents. England and later the US offered sanctuary and, eventually, opportunity to rise to high office.

Now in her eighties, Albright remains a remarkable intellect who does not hesitate to speak her mind and rail against all that she considers egregious, fascism being a primary target. She still takes classes on foreign policy at Washington DC’s prestigious Georgetown University and speaks before eminent gatherings.

Albright believes in American democracy and fears the scourge of fascism that wrecked Europe in the 20th century could once again surface. The election of President Donald Trump added to her “sense of urgency”. The world, she believed, is tottering once again at the edge of a precipice.

“As secretary of state, I was proud to join Presidents George H.W. Bush and Bill Clinton in calling the United States ‘the indispensable nation’,” she writes. “I worry today that the country is, by its own choice, becoming less admired and less relevant in shaping world affairs. Partly for this reason, I believe that fascism and fascist policies pose a more virulent threat to international freedom, prosperity, and peace than at any time since World War II.”

President Trump, she argues, “is the first anti-democratic President in modern US history… If transplanted to a country with fewer democratic safeguards, he would audition for dictator, because that is where his instincts lead. This frightening fact has consequences. The herd mentality is powerful in international affairs. Leaders around the globe observe, learn from and mimic one another. They see where their peers are heading, what they can get away with, and how they can augment and perpetuate their power. They walk in one another’s footsteps, as Hitler did with Mussolini — and today the herd is moving in a fascist direction.”

To press her point about growing fascist tendencies in rulers around the globe, Albright devotes several chapters of the book to each of her favourite political villains, including the late Venezuelan President Hugo Chavez, Turkey’s President Recep Tayyip Erdogan, Russian President Vladimir Putin, Hungary’s Viktor Orban, American senator Joseph McCarthy, Serbia’s Slobodan Milosevic and North Korea’s Kim Jong-un. There is a lot on President Trump too, although he is not labelled as a fascist.

A big chunk at the beginning is devoted to the rise and fall of two iconic fascists — Benito Mussolini and Adolf Hitler — who championed, defined and implemented fascism in its worst form. “Mussolini caught Hitler’s fancy”, recounts Albright, “because they both favoured the same machismo-laden rhetoric of daring, nationalism, anti-Communism, and war”. They both knew that fascism appeals to the fear and confusion in people and once they had acquired power, they consolidated it ruthlessly through violence, intimidation and abuse.

Albright observes: “We might want to remember the explanation that Hitler gave, in 1936, for his popularity: ‘I will tell you what carried me to the position I have reached. Our political problems appeared complicated. The German people could make nothing of them… I, on the other hand …reduced them to the simplest terms. The masses realised this and followed me.’”

The problem therefore is also partly with the people who seek easy solutions to complex issues, react instinctively to challenges and stop thinking when problems seem insurmountable. This provides fertile ground for demagogues to exploit and prompts some among them to gradually acquire total power.

In the end, the people must constantly assess their leaders and pose the right questions. “We should be awake to the assault on democratic values that has gathered strength in many countries abroad and that is dividing America at home. The temptation is powerful to close our eyes and wait for the worst to pass, but history tells us that for freedom to survive, it must be defended, and that if lies are to stop, they must be exposed”, Albright writes.

While some of Albright’s assertions in the book might be debatable — such as her belief that the US can avert the rise of fascism elsewhere — what is not is its intrinsic objective of provoking thought. And think we must, more so in this age of social media where we are repeatedly inundated with inane views, dodgy news and recycled platitudes. There are clear and present dangers emanant in today’s world, even if they do not fit the classic fascist paradigm. This book is a timely and much needed warning.

Indranil Banerjie is an independent commentator on political and security issues