Astrid, 16, is not as blasé as Mireille about winning the Pig Pageant. 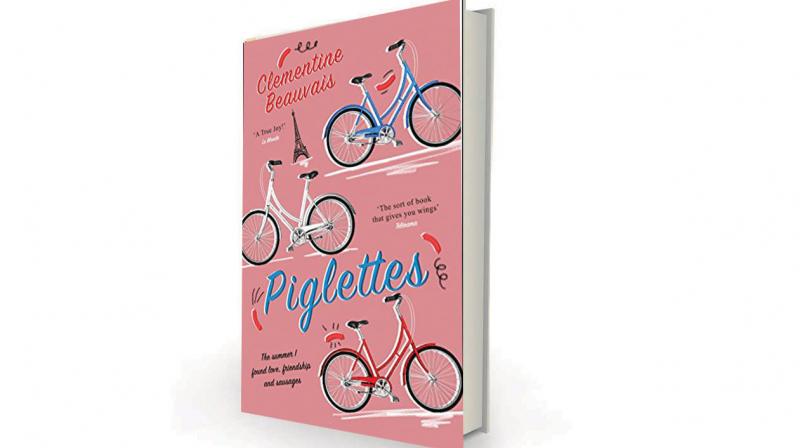 I can give you three perfectly legitimate reasons for why I love Piglettes by Clementine Beauvais; reasons that may not actually have much to do with the book itself. Reason 1: For months, I’ve been lost in a desert of novels that ranged from “just okay” to “what the hell was the hype all about?” to “the only reason I dislike my e-reader is that I can no longer fling a book I hate against a wall”. Stumbling upon Piglettes was like finding an oasis sparkling with Champagne springs in that desert.

Reason 2: For just as many months, my life has been describable as “bleah” and “blah”. There’s been nothing interesting happening at all, just the day-to-day routine. So discovering Piglettes was like having a tiny meteor — a rock from outer space! — plop into the boring soup of my life. And Reason 3: I’m a fan of young adult books. As far as I’m concerned, even with a trite storyline, a well-written YA novel has a freshness, charm, and appeal that books written for old adults only rarely have. Naturally I’d love Piglettes.

All three reasons I’ve listed above are perfectly valid. Yet, here’s the one that, for any reader, makes the best sense of all: this is a brilliant novel in many ways, and I have to evangelise it. Because if you need something to shake you up, make you smile, make you feel a little sentimental, make you think, and make you query the way you see your own world, this is one of best recent novels to read, even if you’re so far from being YA yourself that your nieces have nieces.

Piglettes, translated from the French by the author herself, is about three girls in a village in France who are taunted for their looks. Mireille (the narrator), Astrid and Hakima have been voted by their peers as the ugliest girls in school. This annual Pig Pageant has been held on Facebook for years, organised by Malo, a boy who was once one of Mirielle’s best friends, but who suddenly became her worst enemy when puberty hit. Though the parents of some of the kids tried the get the school to stop the Pig Pageant, the administration says there’s nothing they can do: what happens on social media is not their responsibility.

Bright, quick-witted Mirielle doesn’t care about the contest. The only thing that bothers the 15-year-old is her parentage. Her father, a well-known professor of philosophy, is married to the President of France, and has no idea that he is her father. Mirielle wants him to acknowledge her as his child, but none of her letters to him have been answered.

Astrid, 16, is not as blasé as Mireille about winning the Pig Pageant.

She’s only just moved to town, and had hoped to meet nice people at school. Shattered, she searches for Mirielle’s address and goes to visit her; together they decide to visit the third of the pigs, Hakima, only 12 years old, just for the sake of solidarity. And it’s at Hakima’s place that the three girls find something else in common: they all need, for reasons of their own, to crash the President’s annual Bastille Day garden party in Paris.

For Mirielle, this will be the opportunity to finally bring to her father’s attention the fact that he has a daughter. For Astrid, the attraction is the band that will be playing at the party — Indochine’s music got her through some of the worst times of her life.

Hakima’s determined to have a word with General Sassin, “famous for his feats during the war in a sandy country we shall refer to here as Problemistan”. The “war hero” general is responsible for one of the worst defeats the French army suffered in Problemistan — and the only survivor of the unit that was wiped out was

Kader, Hakima’s brother, now minus both his legs and subject to an internal inquiry into the battle.

So the three girls decide to cycle to Paris, supporting themselves on their road trip by selling sausages (including vegetarian sausages for people like Hakima who don’t eat pork). When the parents raise a ruckus about this plan, wheelchair-bound Kader agrees to escort the girls (yay for Mirielle, who has a mighty crush on Kader). And then, having christened themselves the Piglettes, off they go.

I won’t tell you much about the trip itself — why should I take the joy out of the book for you with a pointless summary? But I will tell you that the Piglettes’ journey soon catches the nation’s fancy.

The girls become heroines, with paparazzi in attendance and much jabber on social media, both for and against them. Though the Piglettes never tell the journalists why they need to crash the President’s party, they become so famous that they don’t need to crash the party at all — they are formally invited to attend instead.

Along the way to Paris, the three Piglettes and Kader learn much about life and themselves.

So does Malo, who believes that the journey is a revenge gig for his Pig Pageant page, and indulges in some sabotage. And so do you, dear reader, as you laugh, swallow lumps in your throat, and resolve to change your outlook on life. There is only one word that can be used to describe this book: it’s a ride! Get it NOW.